You’ve probably seen that video of the Tacoma Narrows Bridge vibrating in heavy winds and then breaking apart. That happened November 7, 1940, less than one year after it opened. The storm producing the 35-45 mph winds that took the bridge down formed off the coast of Washington days earlier, and a few days later killed more than 100 people in the Midwest.

November 11, 1940, was a warm day, in the upper 50s and 60s in the Midwest. It being a holiday (in celebration of the WWI’s armistice) many went out hunting that day. By the end of the day that would change, as a low-pressure system moved up from the southern plains into lower Wisconsin, and Arctic air and wet Gulf of Mexico air fed into the storm on either side.

From Nebraska in the south to Michigan and Minnesota in the north, temperatures dropped by about 50 degrees Fahrenheit, and winds whipped at 50-80 mph. The cold and wet air masses combined to produce up to 30 inches of snow, that piled into drifts 20 feet high. Hunters who left home in light jackets, and were amazed to see so many ducks flying southward, were soon stranded in a blizzard. Roads closed, trains derailed, and phone and telegraph lines were cut, leaving communications down and supplies delayed.

Storm fatalities totaled 145, mostly duck hunters, and sailors on commercial ships on the Great Lakes. An estimated 1.5 million turkeys, planned to be on Thanksgiving tables, died of exposure. It was also the end of the orchards of northern Iowa, where many apples are produced. The cold snap killed almost all the trees, and led farmers to plant crops that wouldn’t take years to come to harvest.

The storm also led to changes in US meteorological systems. Before the storm, all the Midwest forecasts came out of Chicago, and the office operated only during business hours. After the storm, more regional offices were formed, and staffing and forecasting became a 24-hour-a-day business.

Some stranded in trains and ships run aground waited days for rescue. Fuel and food were significantly delayed to the region, and coming late in the Depression this was a serious hardship.

Just over a year before the Pearl Harbor attack, the Armistice Day blizzard had a significant impact on the United States in many ways. It showed the local, state, and federal governments to be lacking in logistics and support of citizens. It also contributed to the anxiety of a population coming out of the Depression and unnerved by the news from overseas. 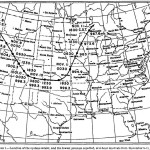 The storm came ashore in Washington, moving first southeast, east, and then northeast. The dots on the map here represent the storm's position every 6 hours. 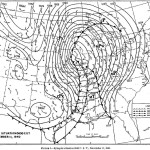 This map shows the winds and fronts around the low pressure system early on November 11, 1940. 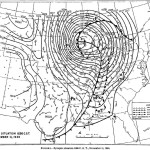 This map shows the position of the weather elements mid-day on November 11, 1940.