Seventy one years ago, on October 8 1945, Percy Spencer filed a patent for a cooking oven powered by microwave radiation. He worked for Raytheon, who owned his intellectual property, so Spencer got a $2,000 stipend but no royalties for his invention.

Percy Spencer, born in rural Maine in 1896, had a very hard early life. His father died before he was 2 years old, and when his mom couldn’t support him after that she left him with an aunt and uncle. That uncle died shortly thereafter. Percy was working in a mill by 12, and as an electrician at 14. He enlisted in the Navy with an interest in radio, and learned there about the science of making and using electromagnetic waves to send information.

By 1939 he was an expert on radar tubes, and was working for Raytheon. Most of the government’s research on radar leading up to WWII was being conducted at MIT’s Radiation Laboratory and Raytheon won the contract based largely on Spencer’s reputation. At Raytheon Spencer developed new manufacturing techniques to build radar tubes much faster.

In 1940 the Tizard mission brought UK radar technology to the US, including a cavity magnetron that greatly improved radar technology. When Spencer was experimenting with magnetrons he discovered that a snack bar he had in his pocket had melted. He was not the first to notice that magnetrons created heat energy, but the next day he was the first to experiment with it. Spencer put a container of popcorn over the magnetron and made the first microwave popcorn. He worked to contain the waves in a metal box and focus their energy.

The first commercial microwave oven was made in 1945, but was very large and expensive. They became smaller and more affordable as the decades passed. 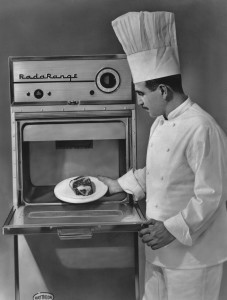 A Raytheon Radarange from the 1950s