Today we see wealthy entrepreneurs funding research to cure or eradicate diseases (e.g. Bill Gates with malaria and polio) or to explore space (Elon Musk and SpaceX). In the WWII-era, there was a wealthy entrepreneur and self-trained physicist who did the same, but he is pretty unknown today.

Alfred Lee Loomis was born to wealthy parents in Manhattan in 1887. His parents separated when he was young, and his father died while he was at Yale studying math and science. His cousin Henry Stimson, who served in presidential cabinets from Taft to Truman, was an older mentor to him. Loomis graduated from Harvard Law School in 1912 and joined a prominent corporate law firm. He did very well at the firm but was not overly excited by the work. When the US entered World War I, Loomis joined and was made captain–he was assigned to the Aberdeen proving ground. While there he devised a device to measure the velocity of ballistics leaving a muzzle. He worked alongside scientists who helped him develop his interest in experimenting in theoretical and practical physics.

After the war Loomis didn’t return to the law but began investment banking. With a partner he developed the concept of holding companies and consolidated electric utility companies, developing power infrastructure on the East Coast. Much of his practice would be deemed insider trading under today’s regulations. In 1928 Loomis believed that the stock market was very overvalued and removed his money and his firms’ capital from the market, converting it to cash. After the crash they reinvested in stocks while their price was very low–his wealth increased exponentially at a time when many people lost all theirs.

Loomis used his wealth to pursue his scientific interests, and to support other science research. In particular, as the 1930’s progressed, he began to support the development of technologies that might support a US war industry. He developed a large lab complex near his mansion in Tuxedo Park in New York. The work there focused on brain waves, and electromagnetic waves.

By 1940, Loomis was very focused on preparation for the coming war. In the absence of government funding of important research, he decided to step in. He opened a new lab on the campus of MIT. Hoping for some obfuscation, he named it The Radiation Lab, hoping to confuse it with the new Radiation Lab at UC Berkeley, run by Ernest Lawrence. Although funded by Loomis, the lab operated under first the National Defense Research Committee, and then later the Office of Scientific Research and Development, in both cases directed by Vannevar Bush.

The ‘Rad Lab’ as it was called, focused on parts of the electromagnetic spectrum that could be used to transmit and receive information. When the Tizard Mission sent British technology and research results to the US, they went to the Rad Lab. They used magnetrons to create high energy waves and developed new radar technology as a result. The 10 cm radar that resulted from this research was used in planes and ships and military bases throughout the war. Nine scientists from the Rad Lab went on to receive Nobel Awards.

After World War II the Rad Lab closed, and its operations, still funded by the government, became part of the Research Laboratory of Electronics at MIT. Loomis was always a very private man, and preferred to operate in the background. In 1945 he divorced his wife, who was suffering from dementia, and remarried. There was a huge society scandal as a result. Loomis sold his properties and led a quiet domestic life until he died in 1975. He refused to give interviews. Perhaps this is why his story, and the story of the Radiation Lab, is little-known. 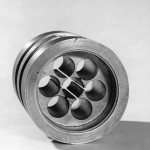 The original cavity magnetron that came from England to the US. From Wikimedia Commons. 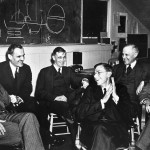