World War II was the time of the Big Band, and Americans all across the Home Front made their ways to performances at popular venues as well as listened to the newest hits on the radio by artists like Bing Crosby or groups led by Duke Ellington. Music kept people’s spirits high while husbands, cousins, friends, boyfriends, and other members of the family were off fighting to bring liberty to a world that found itself in a fierce battle.

Music of  the WWII era paralleled with the sentiments and proceedings of what was going on in the world. This hasn’t changed since. The only slight difference is that instead of 17 shined instruments, our musicians are found with guitars or mixes created with software on computers. Technology has changed the world of music, but what is has not touched is the sheer simplicity of an artist’s creation of songs that reflect the mood of the American public.

Photo courtesy of the National Archives. 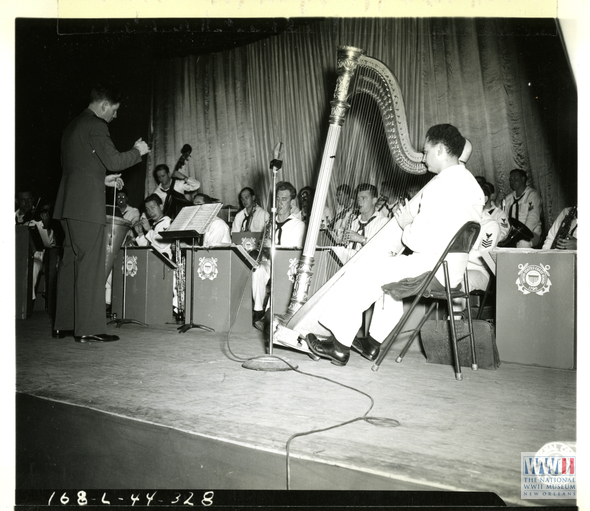 Jazz was a popular genre nationwide during WWII. Before US involvement in the war, themes of music centered on American isolationism and support for the Allied forces. A popular song by Jerome Kern and Oscar Hammerstein II titled “The Last Time I Saw Paris” was published in 1940. There are numerous versions of this song, but singer Kate Smith’s is one of the most well-known. The song creates a nostalgic feel of reflection for the beautiful city of Paris that unluckily fell to Nazi control earlier that year.

As the war progressed in Europe, songs continued to focus on the disapproval of US involvement, but when Pearl Harbor was attacked on December 7, 1941, subject matters changed. Some songs called for scraps to be saved, collected, and donated while others encouraged enlistment. “We Did It Before and We Can Do It Again” by Barry Wood was released only days after Pearl Harbor. It is a rally song that convinced Americans they need not worry about fighting in a second war since they had already come out of WWI victorious. The upbeat attitude of the song was a hopeful disguise of the sentiment of worry most Americans were feeling. Elton Britton, a popular country music artist, released “There’s a Star Spangled Banner Waving Somewhere” in 1942 to reassure families who had lost loved ones in the war that a flag would always fly in their honor.

There were also songs of love and of longing to reunite with loved ones. A well-known song that was released before US involvement in the war, but rose in popularity as more and more men were sent overseas was “I’ll Be Seeing You” sung by many artists, but most popularly by Bing Crosby in 1944.

Music today carries the same value it did during the war. There are artists like Toby Keith who have released songs that remind Americans of our strength of a country as well as express gratitude to soldiers for their sacrifice. A few favorites of Keith’s among the American public include “American Soldier” and “Courtesy of the Red, White and Blue.” There are also songs today that expand beyond our military involvement with the Middle East and zoom in more on social issues happening stateside. “Same Love” released in 2013 by pop culture artists Macklemore calls for equality in the LGBT community. Whether it was 1940, is 2016, or any year in between, singers, songwriters, and composers have the job of creating songs that boost morale, open minds, or bring people together over a common cause.

If you’re a fan of music and are looking for a new playlist to celebrate the weekend, check out the one below. Enjoy taking yourself back in time to the 1940s through these lyrics and beats.