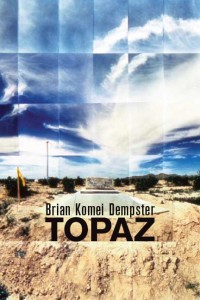 Two weeks ago, the Museum capped off another successful year of free student webinars. In four programs throughout the school year, Museum curators, educators and special guest authors and experts connected with over 9,500 students and teachers from almost every state in the country.

This past webinar,  curator Kim Guise provided an inside look into some of the most fascinating artifacts from the Museum’s latest exhibit, From Barbed Wire to Battlefields: Japanese American Experiences in WWII. We were then joined by editor, professor, and poet Brian Komei Dempster from California. Brian is the editor of Making Home From War: Stories of Japanese American Exile and Resettlement and From Our Side of the Fence: Growing Up in America’s Concentration Camps, where he works with former camp prisoners to tell their stories of incarceration and resettlement. Brian also just released his debut poetry collection, Topaz,which chronicles and reflects upon his own family’s incarceration. Students heard Brian read aloud two poignant poems, including a  particularly moving one about his relationship with his grandfather, a Buddhist priest who was taken to a Department of Justice internment camp during the war.

At the end of the program, we challenged our student viewers to create pieces of poetry themselves. Students were tasked to imagine they were Japanese American teenagers about to be taken away to camp during WWII. We asked them to write a poem about a possession they had to leave behind. Below is a selection of some of the wonderful and thoughtful poems we received from students in Mrs. Fuko’s class in Freehold, NJ. Thanks to all of those who submitted!

I left Japan’s government
I left for liberty; that was my intent.
I don’t need them.
Then I came to U.S.A and lost all of my freedom.

When Japan attacked Pearl Harbor,
I was taken away, I lost my neighbor.
I was told to bring my most prized possession.
But, I loved all my things; this caused depression.

I thought about it hard, and I made my decision.
I was placed in an internment camp much like a prison.
I wish I could have brought it all.

But, instead I brought a baseball.
From that day on I was occupied.
I played my favorite sport in a camp I despised.
Even though I could only play baseball in a limited space,
Whenever I was playing there was a smile on my face.

In This camp I was treated like an animal.
I had only one possession. This life was very dull.
The ball still sits on my shelf today perfectly in line.
In the darkest of times it was my only ray of sunshine.

If I had to bring one thing with me,
It would be my family.

All the lost toys, games, prizes,
would be be gone without a doubt-
no lies.

But my family-
would stay with me ‘till I die,
or at least try.

Their love is stronger than a game,
a box, a picture, some chocolate, or a toy train.
But in the end everything will come through,
because their love is always here for me, too.

Even though I might be selfish sometimes,
mean, a brat, or a little sly-
I will always love my family,
I hope they’d do the same,
I believe they are worth more than a game.

So, I hope that anyone up to this day
would choose their family over a game,

But If someone doesn’t,
they should keep this in mind:

Without a family to love,
there’ll be no love to find.
If I was separated from my family,
I can honestly say,
I’d have nowhere to be.

My soul: lost,
in thin air,
only to re-appear,
in a jungle of despair.

In conclusion, this is why I’d bring my family,
nothing else can compare-
to the love they give me.
Oh yeah!

What is happening is a horror,

Should I bring a hat, a picture of friends, a flashlight or lamp?

What should I bring to the internment camp?

Ok,ok, I have decided what to bring,

Origami paper, that will be the right thing.

I can fold whenever I am bored,

I should even bring a ball and chess board.

Now I know what not to leave behind,

If I don’t, I will forever be stultified.

and that is when I will be in trouble.

If you missed this webinar, or any of the our previous programs, all of the recordings are available to view.  Stay tuned for our lineup of webinars for the 2014-2015 school year to be released this summer!