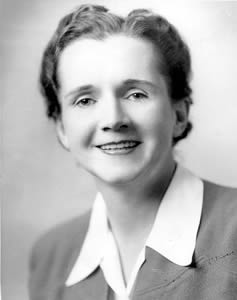 Today is the birthday of Rachel Carson, the ecologist whose poetic writing touched off the modern environmental movement with the publication of Silent Spring in 1962. Carson died on April 14, 1964 after a long battle against breast cancer; today marks her 107th birthday.

Carson worked with the U.S. Bureau of Fisheries during World War II. She wrote campaigns encouraging citizens to eat more fish and less meat, as meat was rationed during the war years. Her weekly radio scripts on aquatic life became a surprise hit, likely due to love of the sea along with her incredible gift with words.

Carson’s second novel, The Sea Around Us (1951), won the National Book Award along with two doctorates and a prize in science writing. It also led to a Guggenheim grant which allowed her to leave the U.S. Bureau of Fisheries and concentrate entirely on writing Silent Spring. Following its publication, Carson came under attack as chemical companies attempted to discredit her scientific claims and slander her character. Ultimately, the controversy led to heightened public awareness of the dangers of indiscriminate pesticide use. Rachel Carson read the following passage from Silent Spring as part of a CBS Reports TV special which aired on April 3, 1963:

“We still talk in terms of conquest. We still haven’t become mature enough to think of ourselves as only a tiny part of a vast and incredible universe. Man’s attitude toward nature is today critically important simply because we have now acquired a fateful power to alter and destroy nature. But man is a part of nature, and his war against nature is inevitably a war against himself…. Now, I truly believe, that we in this generation must come to terms with nature, and I think we’re challenged as mankind has never been challenged before to prove our maturity and our mastery, not of nature, but of ourselves.”