Operation Ironclad: The Battle of Madagascar 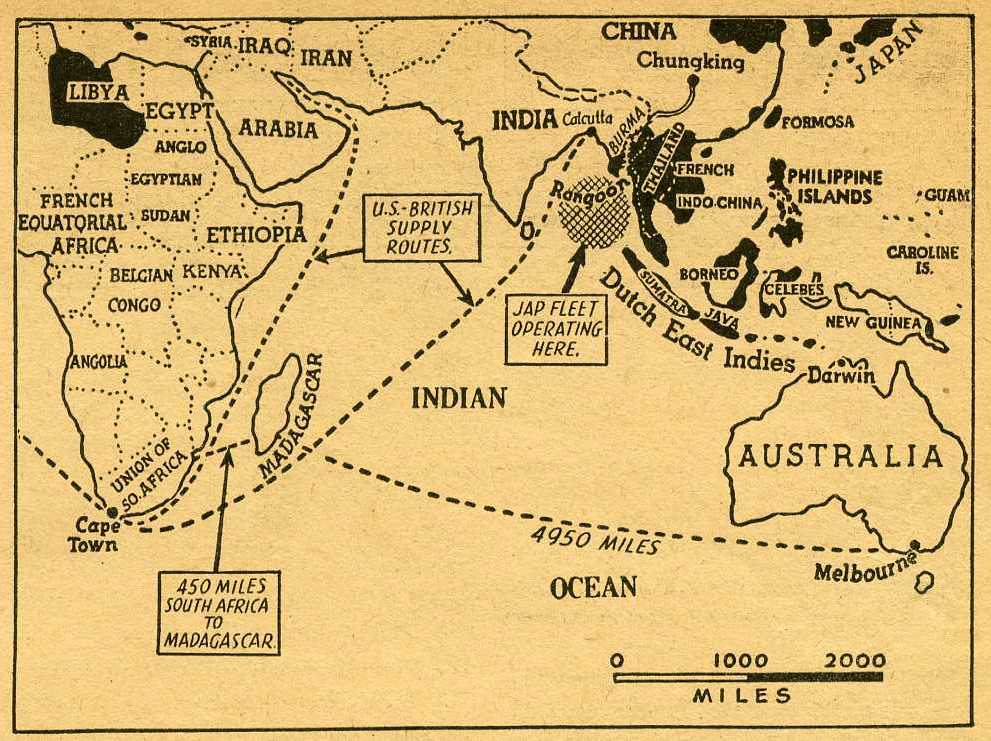 Map of the Indian Ocean area, showing Madagascar and the sea lanes it might threaten. Gift of Nancy McBeth, 2010.431

Today marks the 70th anniversary of the British invasion of the Vichy French controlled island of Madagascar. The African island, the fourth largest in the world, wasn’t of strategic importance in and of itself. But her proximity to Allied shipping lanes traveling around the tip of Africa made taking the island a necessity for the continued functioning of merchant shipments supporting troops in the CBI and elsewhere.

British and American leadership feared the possibility that Vichy would either cede the island completely to the Japanese, as had been done with French Indo-China–thereby allowing the Japanese to easily take Singapore, Malaya, and the Dutch East Indies–or that they would allow the Japanese use of the submarine pens on the island. The incredibly long range Japanese submarines, if given a home in the Indian Ocean, would pose a massive threat to Allied sea lanes and therefore necessitated the taking of the entire island.

On 5 May 1942, British land and naval forces invaded Madagascar with the support of the South African Air Force, quickly taking the key port of Diego Suarez by 7 May. The British believed that in taking this port, the entire island would be secured. Under the leadership of Vichy supporter Governor Armand Leon Annet, however, the 8,000 defending troops moved southward. Just as the Japanese had underestimated the will of American forces in the Philippines, resulting in months of drawn out warfare, the Malagasy and Senegalese troops under Annet forced the British to fight until 6 November. Although combat was very low-level, costing less than 200 men killed on each side, the ongoing battle in Madagascar denied Allied operations elsewhere the use of some 10,000 British troops.

President Roosevelt was fully supportive of British actions aganist Madagascar, and promised to return the island to the French after the war. A State Department bulletin of 9 May 1942 stated:

The Government of the United States is at war with the Axis powers, and if it becomes necessary or desirable for American troops or ships to use Madagascar in the common cause, the United States will not hesitate to do so at any time.

The United States and Great Britain are in accord that Madagascar, will, of course, be restored to France after the war or at any time that the occupation of Madagascar is no longer essential to the common cause of the United Nations.

Roosevelt made good on his promise, and the French regained control of the island after the war. It wasn’t until 1960 that the Madagascar gained its independence.

*United Nations as used in this context does not refer to the organization we know today, but was another name for the Allied countries.

Do with less so they’ll have enough! The 70th Anniversary of Ration Book One SS Alcoa Puritan