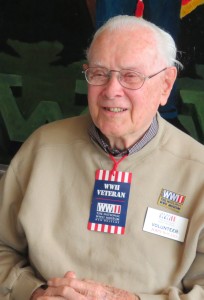 John Rogers, a WWII veteran and Museum volunteer, passed away Sunday, October 29. He was 98.

This week we bade farewell to John Rogers, a WWII veteran and beloved volunteer here at the Museum. John and his wife, Tee, were a familiar sight in the Museum’s US Freedom Pavilion: The Boeing Center, where they could often be found sitting together near the Sherman tank as John chatted with visitors about his experiences as a tank commander during World War II.

It was not far from this very spot that, many years ago, John prepared for his WWII service, training as a tank commander in Louisiana. He then deployed to Europe, where he fought through German forces and Norman hedgerows toward the Battle of the Bulge. He encountered battles, sniper attacks, friendly fire losses, and a staggering range of human emotion, from the exuberance of French citizens cheering the arrival of American tanks to the devastating discovery of emaciated prisoners too weak to celebrate their long-awaited liberation from concentration camps. Later, John would recall the strong conviction he felt in the face of these scenes: that the Allied cause had been just; the fight had been worthy. Despite the violence of battle he had witnessed, “I knew then that we were right in what we had done,” said John in the oral history he recorded at the Museum, now featured in the exhibit Road to Berlin and in the Museum’s online Digital Collections. There, John’s voice will live on to touch those who couldn’t meet him in person, continuing to educate and inspire.

Our deepest condolences go out to Tee and the rest of John’s family. We are so grateful to have had John as part of ours.