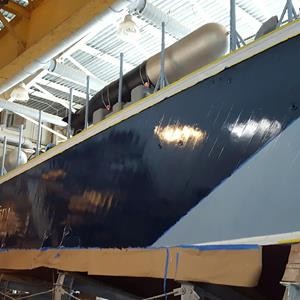 One of the final touches to the restoration of PT-305 is a fresh coat of paint. But this isn’t just a fresh coat—it is the camouflage pattern applied to PT-305 in November 1944, called “Measure 32 modified.”

During World War II, US Navy ships were rarely painted gray. There were a large and diverse number of camouflage schemes for a number of tactical situations. Generally speaking, camouflage is not intended to make a ship disappear, but rather to make a vessel’s course, speed, and class difficult to determine. For large vessels, the Navy issued specifically designed camouflage patterns. For PT boats, official designs set a general standard but the camouflage patterns of individual boats were ultimately determined by squadron commanders. 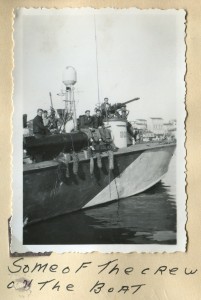 The blue painted on the deck was intended to reduce visibility of the vessel when viewed from aircraft.

In addition to the three shades of blue on the boat, PT-305 also carried aircraft recognition coloration. “Insignia yellow” was painted on the bow, “insignia red” across the stern, and a large red-and-yellow star was painted on top of the radar dome. This was intended to make PT boats in the Mediterranean easily identifiable to Allied aircraft.

More than a year of research using photographs and period documents went into determining the camouflage pattern applied to PT-305. The re-creation of the “Measure 32 modified” applied to PT-305 has restored her unique identity and highlights her combat history.