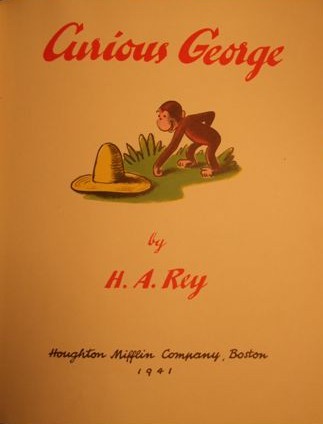 Seventy-five years ago this month, the debut installment in the beloved children’s series  Curious George, written and illustrated by Hans and Margret Rey, reached store shelves for the first time. Though the titular monkey with a seemingly endless supply of curiosity had appeared in an earlier collection of stories by the Reys — 1939’s Cecily G. and the Nine Monkeys — in those stories the character of “George” had been known as “Fifi.”  Hans and Margret — both Jews living in Paris — fled Europe after the Nazi conquest of France in 1940, escaping over the Spanish border by bicycle; the illustrated manuscript of the book that would be published by Houghton Mifflin the following year was one of the few possessions they took along with them.

Despite being the first book in a series that has been adapted into dozens of spin-off titles, cartoons, and animated films, the major characters and tropes of the Curious George books were already well in place by 1941, with The Man In The Yellow Hat having to rescue George after he first falls off a ship transporting him across the Atlantic Ocean from Africa and then from a police station where he has wound up after making a “false alarm” report of a house fire.