Congress Seeks to Recognize the Wereth 11 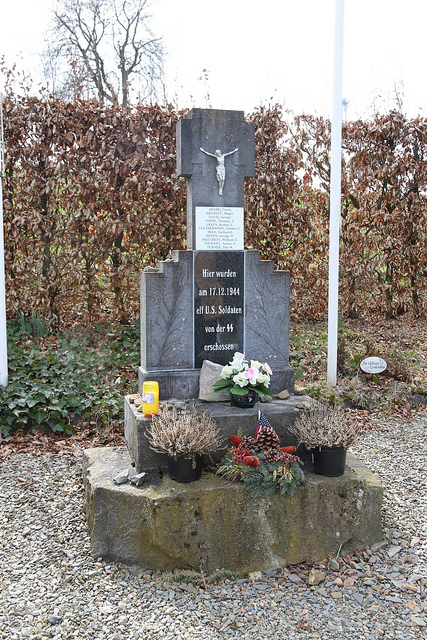 The US Wereth Memorial in Wereth, Belgium. Belgian civilian Hermann Langer was only 11 years old when he met and helped shelter the 11 men of the 333rd Field Artillery Battalion before their capture and murder. In 2004, Langer established a nonprofit and erected this monument remembering them. In May 2015, Museum staff and volunteers traveled to the memorial to pay their respects to the Wereth 11.

In 1949, the US Senate investigated judicial proceedings resulting from atrocities during the Battle of the Bulge, listing 12 locations where American prisoners of war and Belgian civilians were allegedly murdered by German troops. The location where 11 African American soldiers of the 333rd Field Artillery Battalion were killed by the German SS after their surrender in Wereth, Belgium was omitted from the report of a Senate subcommittee.

Over the past 70 years, the event known as the Wereth Massacre has been a largely forgotten tragedy from the final phase of World War II. Today, momentum is growing in Congress to give proper recognition to the 11 men who died serving their country. The National WWII Museum, led by President and CEO Gordon H. “Nick” Mueller, urges citizens, museums, and other institutions to back the current effort – reflected in House Resolution 141 – to revise the 1949 Senate report and officially recognize the service and ultimate sacrifice of these 11 men.

The 1949 Senate report surveyed a range of atrocities committed in several locations in Belgium beginning on Dec. 16, 1944, and ending nearly a month later.

The atrocities, which included the killing of approximately 350 American prisoners of war ( after their surrender)  and 100 Belgian civilians, were “committed by the organization known as Combat Group Peiper, which was essentially the first SS Panzer Regiment commanded by Col. Joachim Peiper,” the report concluded. “On the eastern front, one of the battalions of the Combat Group Peiper … earned the nickname of Blow Torch Battalion after burning two villages and killing all the inhabitants thereof.”

In a letter to West Virginia Congressman David B. McKinley, sponsor of H.R. 141, Mueller said, “Until recent years, many relatives of these murdered soldiers were left to believe that their loved ones simply died in combat. Records show there was evidence of torture and disfigurement among the deceased soldiers, and some observers believe the radial ideology of Nazi SS soldiers could have influenced their brutal treatment of these artillery unit members.”

We will never forget the service of the Americans lost in this episode: Curtis Adams of South Carolina, Willliam Pritchett and George Davis Jr. of Alabama, Nathaniel Moss and George Motten of Texas, Due Turner of Arkansas, James Stewart of West Virginia, Robert Green of Georgia, and three Mississippians, Mager Bradley, Thomas Forte, and James Leatherwood.