What are you wearing?

In 1940 the answer was likely some combination of cotton and wool–maybe silk and linen.

Today there is a huge range of synthetic fibers used to make clothes. Spandex, lycra, dry-wick, polyester, acrylic–these fibers in today’s clothes all owe their existence to nylon.

Just at the beginning of the Great Depression, Charles Stine was head of DuPont’s chemistry division. He had convinced the executives at the company to give him money to build a new laboratory and fill it with scientists. At first he had trouble getting chemists to move from academia to industry, but eventually he found a young scientist named Wallace Carothers, who taught Organic Chemistry at Harvard. Carothers was intrigued by the research on polymers conducted by a German scientist, Hermann Staudinger. He wanted to see if he could make polymers, long chains of organic units, from smaller and simpler chemicals by stringing them together.

Carothers found success pretty shortly, when in 1930 a research assistant in his lab created a very long polymer they could pull into long threads. This was the first polyester. It was impossible to use in clothes because it’s melting point was too low, and it was soluble in water, but it was a start.

Eighty-two years ago today, May 24, 1934, another research associate of Carothers’, made thread from a polyamide that was strong and elastic. It was the first nylon. Unfortunately one of the precursors in its synthesis was very difficult to make. The research continued, and they found a way to use benzene as a starting product. By 1938 DuPont was building a nylon production facility in Delaware.

DuPont decided to focus on making fibers for textile companies to make stockings, replacing silk. Nylon stockings entered the retail market in 1940, and by 1942 DuPont fibers were in 30% of all stockings.

All that changed immediately in 1942. Nylon production was diverted to make ropes. tire cording, and parachutes for the military. When production of nylon returned to the retail market after the war, demand was incredible. In one case in Pittsburgh in July 1946, 40,000 women formed a line over a mile long to wait for the release of 13,000 pairs of nylon stockings. Struggling to meet demand throughout the rest of the 1940s, DuPont licensed the manufacture of nylon in 1951.

By the 1960s nylon, polyester and other synthetic fibers were at their peak, comprising more than 60% of all fibers produced worldwide. Shortly after that they lost some of their luster, and by the 1970s had decreased to about 45% of all production. In the last two decades new forms and uses of synthetics fibers have increased, and not just in clothing. Similar forms of the same fibers are used to make furniture and kitchen products. 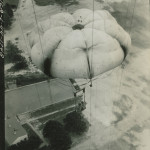 By late in the war, parachutes like this one were all made from nylon. From the collection of the NWWII Museum. 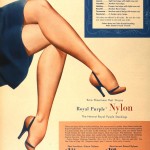 An ad from Sears in 1940, when nylon stockings first entered the retail market. From the Education Collection at the NWWII Museum. 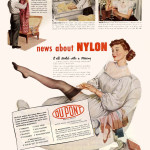 An ad from 1948 when nylon returned to the retail market. From the Education Collection at the NWWII Museum. 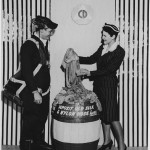 Collecting used stockings for recycling during the war. From the Education Collection at the NWWII Museum. 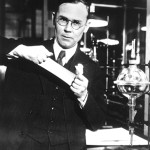 This is Wallace Carothers posing for a company photo in his DuPont lab. From WikiMedia Commons.