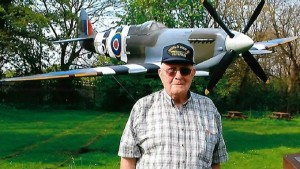 One of the last images taken of Melvin Rector on tour with The National WWII Museum’s Masters of the Air 2016 tour.

The National WWII Museum recently hosted one of the most emotional tours in the history of the institution’s travel program. During Masters of the Air 2016, we lost Melvin Rector, Technical Sergeant, 339th Bomb Squadron, 96th Bomb Group, shortly after finishing a tour of RAF Uxbridge just outside of London. The loss of Melvin is surely on the hearts and minds of everyone who attended the tour, as well as Museum staff and Melvin’s family who were here back in the States.

The special care Melvin received in England, along with the abundant media attention, was a testament to Melvin’s service. Melvin was a radio operator/gunner on a B-17 and flew eight combat missions over Germany in the spring of 1945. Four of his missions encountered heavy flak, and on April 3, 1945, his plane returned with several holes in the wings.

Tour historian Donald L. Miller, PhD and tour manager Maddie Ogden represented the Museum with honor and the utmost professionalism while managing Melvin’s arrangements and continuing on with a memorable tour. We are grateful for their service to the Museum’s travel program.

Melvin Rector passed away at 94 years old. He joined the Masters of the Air tour so that he could see his air base one more time, but unfortunately he passed away only three days before the group was to arrive at RAF Snetterton Heath. The bravery, courage, and sacrifice that Melvin exhibited during the war years has become our nation’s heritage. His fearlessness and determination will live on for many years to come.