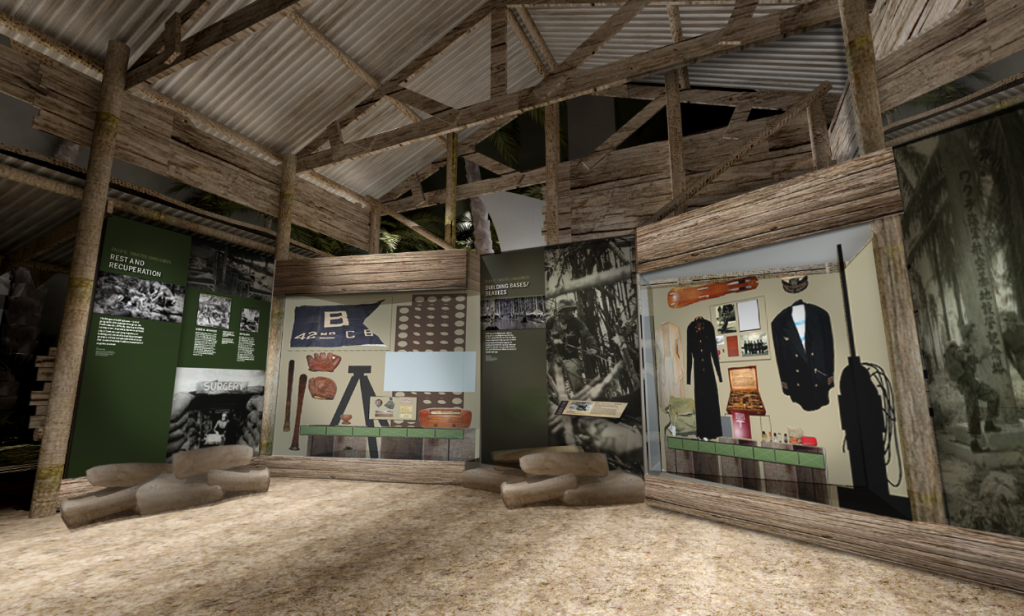 As we continue through the Road to Tokyo and into the Pacific Campaign Challenges gallery, we come to two immersive exhibits detailing the monumental obstacles American forces had to overcome for victory in the Pacific.

Building Bases in the Pacific (Seabees)

The vast geography and logistical challenges of the Pacific War led to the creation of hundreds of airfields, supply depots, ports, barracks and more by the Navy’s Construction Battalions (CB, or “SeaBees”) as well as other service engineers. Building Bases in the Pacific will explore the lives of these critical servicemen including the complexities of their work and the obstacles that they faced. Personal accounts will feature the difficulties of life in disease ridden and hostile environments, and the importance of building positive relationships with native island populations. Construction was vital for pushing toward mainland Japan, and this exhibit will discuss the various ways in which Navy SeaBees helped lead to Allied victory in the Pacific.

This exhibit will explore difficulty of life in the Pacific, as well as the medical advances that were made in light of many hardships. American forces serving in the Pacific had little opportunity to escape the war. Escape was crucial for troops to mentally and physically recover from their service, though there was little that compared to the comforts of home. Some troops were allowed furloughs in Australia and New Zealand, but many were trapped in the tedium of remote island locations, never allowing them a break from their environments. An Alien World will feature various accounts and memoirs of these trying times of Pacific campaign service men and women.

The Building Bases in the Pacific exhibit within Pacific Theater Challenges (Seabees) has been made possible through a generous gift by Jones Walker LLP. Bill Hines is the Managing Partner of Jones Walker and also serves on The National WWII Museum Board of Trustees.

Jones Walker was especially interested in supporting the Museum’s Road to Victory Capital Campaign due to the efforts of the Museum’s Board Chairman, Richard Adkerson, CEO of Freeport-McMoRan. Adkerson introduced the firm to the upcoming Road to Tokyo galleries. Hines states that “many of our partners and I were moved by the exhibits, and we felt inspired to support this segment of the Museum’s visionary expansion.” 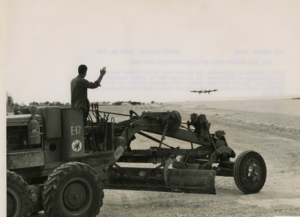 After the presentation, Jones Walker committed to sponsor the Building Bases in the Pacific (Seabees) exhibit. Hines says that “we were drawn to Seabees exhibit because of Richard Adkerson, whose father, J.W. Adkerson, was in the Seabees. We thought it was the perfect way to honor Richard’s father and the other noble men who fought in WWII for the cause of freedom.”

Commenting on his many years of involvement with the Museum, Hines states that President and CEO, Dr. Gordon “Nick” Mueller never fails to leave a lasting impact. Hines remarks that Dr. Mueller “has unparalleled knowledge about the detailed history of WWII and its importance to the world. His passion, vision, and drive for conceiving many of these exhibits and executing on the vision are great assets to our city and our country. Because of his work, our children and our grandchildren will know how important WWII is to our history as a nation. Seeing the Museum through to completion has made a great impression on me and many others at Jones Walker. “

When reminiscing of his time spent on the Museum’s Board, Hines states that he has found many of the Museum’s events both memorable and moving. One that stood out the most to him was the Grand Opening ceremonies for the Road to Berlin galleries last December. Hines states that “I found it to be one of the most inspiring and patriotic events I’ve ever attended.”

Hines believes that supporting the WWII Museum is most important in preserving our nation’s history and allowing future generations to be fully educated about the significance of WWII. He states that “it is an honor to have Jones Walker associated with such an amazing organization, and I would encourage others to consider supporting the Museum.”

The Museum is fortunate and grateful to have the support of Jones Walker, LLP in helping the Museum complete our Road to Victory Capital Campaign.