As tensions escalated in Europe and Asia, Roosevelt knew he had to prepare the country for war. He was aware that there were critical parts of the manufacturing system that were weak, and that conflict would limit US access to resources in a way that might threaten national security. Using government institutions to support economic development was something his administration had a lot of practice with, so he turned to the Reconstruction Finance Corporation (RFC), which had been created by Congress in 1932 under the Hoover Administration.

At Roosevelt’s direction the RFC created or purchased 9 different corporations. All of these helped develop resources (like rubber or fibers or metals) or supported development of manufacturing facilities. The Rubber Reserve Company at first just controlled strategic reserves of rubber. South Asia was where most rubber plantations were located, and it was coming under the control of the Japanese. Most of the research on synthetic rubber was being conducted by German chemists, who had become expert and developing oil and coal tar into other resources. When it was created the Rubber Reservc Company had about 1 million pounds of rubber.  That seems like a lot, but the military at that time was using about 600,000 pounds a year, and if production increased, so would the need for rubber.

Under the umbrella of the Rubber Reserve Company, several private corporations, including Firestone, Goodrich, and Goodyear,  signed a patent and information sharing agreement, and a committee met to develop a plan for producing synthetic rubber.

A form of polymer called styrene-butadiene rubber was chosen for production. It was the best form for making tire treads, as it is resistant to abrasion and holds its form well. It does, however, require more adhesive than natural rubber. Other polymers were chosen for other uses (such as wiring insulation).

Although the styrene-butadiene rubber could be used on the same manufacturing equipment as natural rubber, it’s use in manufacturing required a big research investment. They used monomers of butadiene and styrene, and mixed them with soap, water, and the catalyst potassium persulfate. By late fall of 1942 the companies had begun successful production. They shared over 200 patents in their consortium. all funded by the RFC through the Rubber Reserve Corporation.

By 1945 the US was producing almost 1 million tons per year of synthetic rubber, more than half of which was produced by the companies in the Rubber Reserve Corporation’s agreement. By 1955 the government had sold all the plants, and control of production was returned to private corporations. 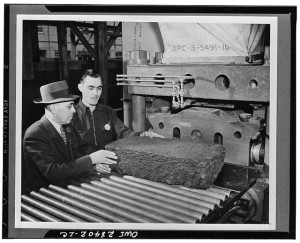 A block of synthetic rubber comes off the line, and is headed for the baler. From the Library of Congress.

Normandy Academy: From the Beaches to the Falaise Gap ROAD TO TOKYO COUNTDOWN: EXHIBITS WITHIN PACIFIC CAMPAIGN CHALLENGES