The Pacific war presented extreme environmental conditions, isolation, and vast distances never before faced by the American military. It took ingenuity and major engineering feats to build bases, airfields, and supply depots – all critical elements of a winning campaign. The harsh environment harbored flourishing tropical diseases that carried major physical and psychological impacts for US forces, threats that added to the uncompromising, kill-or-be-killed nature of the struggle against entrenched Japanese forces.

Exhibits within this gallery include Building Bases in the Pacific (Seabees) and An Alien World. 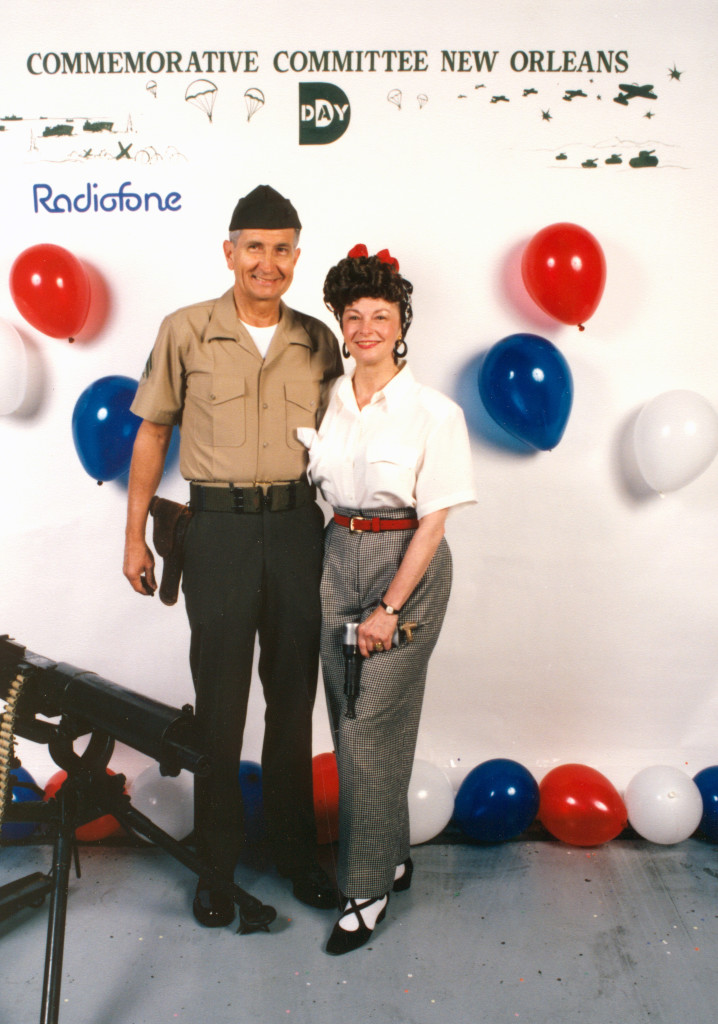 The future Pacific Campaign Challenges Gallery has been made possible through a generous gift from the Estate of Patrick F. Taylor. This presentation of an essential part of the war story is one of many ways that the generous philanthropy of Phyllis and Patrick Taylor has impacted the Museum.

Phyllis and Patrick met when Phyllis was working at a hospitality booth at an oil show in Lafayette, Louisiana. Patrick was a guest of the company she was working for and was immediately smitten with Phyllis. He tricked her into going out with him by telling her that the man who was supposed to give her a ride home had been called off on a job and had asked Patrick to give her a ride home. The next day the two had lunch and that evening, Patrick announced to a friend that he had met the woman who would become his wife. Fourteen months later, Patrick and Phyllis were married. New Orleans became their home for the next 40 years.

The couple first became involved with The National WWII Museum through their friendship with Museum founder Stephen E. Ambrose. Patrick and Stephen were part of a group that met regularly at the Taylor ranch in Mississippi to “solve the problems of the world.” Phyllis had a special interest in WWII history because she had several family members who served in the war, including her godfather, an aunt, and two uncles.

Shortly after plans for The National D-Day Museum were put into place, the Museum learned of a Supermarine Spitfire that was to be auctioned off in London, and the Museum asked Patrick if he would act as its representative. Journalists in London were intrigued that two New Orleanians had arrived in London with intentions of purchasing the renowned fighter plane, and the next day The Times of London published an article about Patrick and Phyllis. The Museum provided the funds to back the winning bid for the plane, but needed additional funding to have the plane shipped to the United States and then fully restored. Patrick and Phyllis generously covered those costs, and the Spitfire still hangs in the Louisiana Memorial Pavilion today.

Patrick was always a student of history. Phyllis shared that the two of them “were elated with the establishment of the Museum and overjoyed when it became The National WWII Museum” in 2004.

Tragically, Patrick passed away before the beginning of the Museum’s Road to Victory Capital Campaign. Phyllis felt that “there was no more appropriate tribute to him than to provide funding in support of the Museum’s expansion.” Phyllis chose to name Pacific Theater Challenges in Road to Tokyo to ensure that Museum visitors recognize that American involvement in World War II came about as a result of Japan’s attacks at Pearl Harbor and elsewhere across the Pacific. Phyllis said it is important to support The National WWII Museum because “to make a contribution to the Museum is in fact contributing to the preservation of our history. I can think of no better gift to give to our country than just that.”

“The Museum and its staff have done an incredible job to not only convey the message and make it thought-provoking, but also to make it fun and enjoyable, which is certainly a criterion to engage the younger generations,” Phyllis said. She loves attending Museum events to see the smiles on the faces of the WWII veterans as they exchange stories. She called making that experience possible is “my greatest gift.”