Life as a Japanese American Student during WWII

The National WWII Museum’s “See You Next Year!” Yearbooks from WWII website contains a collection of WWII-era school yearbooks from across the nation that provide an excellent perspective on how student life was affected by WWII.  This site is a great way for students to interact with primary source material and understand what life was like on the Home Front during WWII.  As May is Asian-Pacific American Heritage Month, two yearbooks in particular provide an intimate comparison of life as a Japanese American student in the late 1940’s.

Students at both President William McKinley High School in Honolulu, Hawaii and at Rohwer Center High School in McGehee, Arkansas were of Japanese descent but experienced drastically different educational environments.  Following the Japanese attack at Pearl Harbor on December 7, 1941, the US government perceived Japanese Americans to be a threat to national security.  On February 19, 1942 President Roosevelt signed Executive Order 9066, giving the War Department the authority to exclude any or all persons from any part of the country.  However, there was no comparable order signed that applied to the citizens of Hawaii.  Unlike students in Hawaii, the Japanese American students at Rohwer Center High School had been relocated to McGehee, Arkansas as a result of Executive Order 9066.  Despite the overwhelming differences experienced by these Japanese American students at each school, their yearbooks present similarities that show how they viewed themselves as Americans. 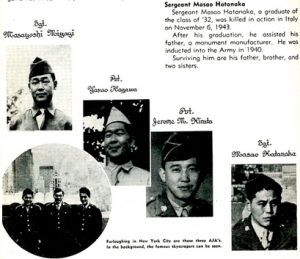 Excerpt from the McKinley High School yearbook remembering former students who were killed in combat. From the Collections of the National WWII Museum. See more pages from this yearbook at “See You Next Year!” High School Yearbooks from WWII, ww2yearbooks.org.

Student life at McKinley High School in Hawaii was typical of many other schools around the nation.  Students participated in War Bond and Stamp drives, devoted countless hours to volunteering throughout the community, planted Victory Gardens, donated blood, assisted the Red Cross by making bandages, and collected scrap metal, rubber, and paper.

Yet by 1944 numerous students had joined the military and were serving in Europe and in the Pacific.  The first pages of the yearbook served as a sobering reminder to the current students of the enormous cost of war by paying tribute to former students that had lost their lives in combat.  Even as most Japanese Americans on the continental United States were forced to relocate to Internment Camps, students of Japanese ancestry on the Hawaiian Island were making sacrifices to aid the war effort of the United States.  The yearbook’s “Dedication” reminded students that, “The life of America is involved in the present struggle, and many persons, young and old, weak and strong, of many races and creeds, are sharing the burdens at home and on the battlefield to make victory possible and quick.”  Students were repeatedly reminded of the contributions that they made in the past year ranging from a successful “Buy a Bomber” campaign, working in the pineapple fields, collecting essential war material, and the students that had enlisted for military service. 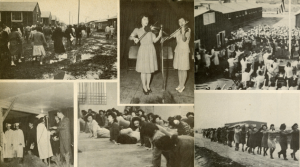 Student activities at Rohwer Center High School. From the Collections of the WWII Museum. View the entire yearbook at “See You Next Year!” High School Yearbooks From WWII, ww2yearbooks.org.

Thousands of miles East of Honolulu, students at Rohwer Center High School in Arkansas remained optimistic about what the future held for them as Americans, even though they had been forced from their homes during the war.  The yearbook’s “Forward,” taken from Joseph C. Grew’s 1943 address at the Annual Banquet of the Holland Society, attested that “the overwhelming majority Americans of Japanese origin wish to be and wholly are loyal to the United States and not only that but wish to prove that loyalty in service to their native land.”  Students participated in similar activities that others were doing across the US like: attending football and basketball games, holding annual dances, and participating in various other extracurricular activities.  Like students at McKinley High School, students at Rohwer Center High School allocated time to focus on selling War Bonds and Stamps, knitting clothes with rationed material, and planting Victory Gardens.  However, they did so behind barbed wire and beneath the shadows of guard towers.  Even while these Japanese American students were forced into Internment Camps, they continued to support the war effort.

A comparison of both yearbooks shows that the Japanese American students at both high schools experienced drastically different environments during WWII.  Students at Rohwer Center High School looked past their internment and tried to create a “normal” educational environment, while still dedicating their time to supporting the US war effort.  In Honolulu, students were confronted with the cost of war as they lost former students in combat and still made sacrifices to contribute to the war effort at all costs.  Still, as seen through both yearbooks, the Japanese American students remained loyal to the US war effort, made innumerable sacrifices for an Allied victory, and remained confident about what their future held for them as Americans.

For more information about the internment and military service of Japanese Americans during WWII, please visit our website:  From Barbed Wire to Battlefields: Japanese American Experiences in WWII

By Edward Avery, Education Intern at The National WWII Museum.