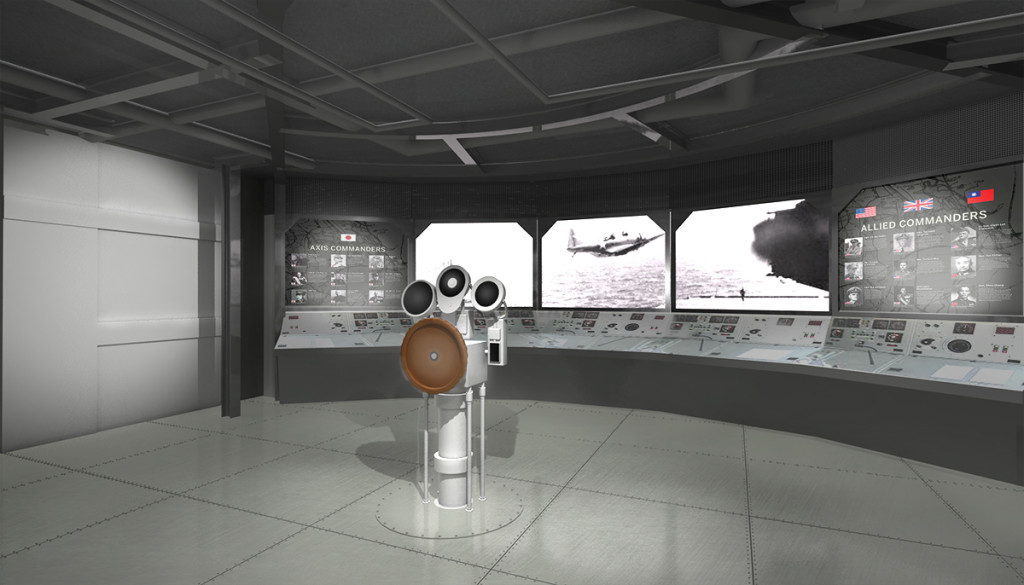 The effort to secure victory over the Japanese military in World War II brought about entirely new methods and strategies of naval warfare. The availability of innovative resources and technologies, coupled with the need to devise an alternative naval approach after the US fleet of battleships was diminished by the attack at Pearl Harbor, forced naval warfare to evolve rapidly. The introduction of unrestricted submarine warfare and aircraft carrier-based combat completely changed the way battles at sea were waged.

As we continue down the Road to Tokyo, we stop next at the New Naval Warfare gallery, which will demonstrate how the United States employed these new strategies, point to the obstacles they faced, explore the key naval battles that shifted the course of the war, and share the experiences of those who served on ships, submarines, and aircraft in the Pacific.

The New Naval Warfare will include six major exhibits that will employ an array of artifacts, interactive displays, and audio visual presentations to capture visitors’ imaginations and bring the history of the war in the Pacific to life. Visitors will learn about sailors’ and aviators’ experiences in their own words through oral histories that recount battles and everyday life at sea. Throughout, the exhibits will communicate both the broad strategic complexity of naval warfare and the individual bravery and leadership of the service members who took part in it. The New Naval Warfare gallery will connect with visitors to cultivate a better understanding of naval warfare in the Pacific, and its significant contribution to Allied victory in World War II.

The New Naval Warfare gallery in Road to Tokyo has been made possible through a generous gift from the late Lt. Commander Alden J. “Doc” Laborde, USN.

Born in Vinton, LA and raised in Marksville, Alden “Doc” Laborde, came from a long line of determined and hardworking individuals. He enrolled at the Naval Academy in June of 1934, and reveled in the traditions and regulations. He took great pride in the marching orders, strict rules, and square meals that shaped him into a man of great patience and character.

According to Alden, the Naval Academy changed his life, and upon graduating in 1938, it was not long until WWII forced his skills into use. He served as commander of three combat vessels in the Atlantic and Pacific theaters. His convoys took him through various training sites in the US to Okinawa in August of 1945, arriving on the Japanese shore a few days after the atomic bombs were deployed. He remained in Japan for a few months, sweeping the harbors, before returning to the US in December of 1945 during a time of peace.

After the war, Alden began working for Kerr-McGee Corporation, as a mine-marine superintendent. At his time at Kerr-McGee, Laborde believed that the need to build a platform for each new well site was inefficient and costly, and that it may be possible to construct a mobile, submersible drilling rig. Inspired, he left the company and found an investor, Murphy Corp., to launch the first offshore drilling rig, pulling in Shell Oil Company as his first customer.

Alden found that his new method was incredibly successful and went on to establish three listed offshore service companies during his life: The Ocean Drilling and Exploration Co. (ODECO) in 1953, Tidewater Marine in 1954, and Gulf Island Fabrication Co. in 1985.

According to his son Jack, Alden was “very passionate about what he did, but often said you could always do things better.” He surrounded himself with intelligent and dedicated employees. He preached moderation in all things and was a devoted Catholic, receiving daily communion until his death. His attitude of being “happy with what you have,” is a lesson that his family continues to take to heart.

The Laborde family first became involved with the National WWII Museum shortly after Hurricane Katrina. The Almar Foundation, which tends to focus its efforts on poverty and rehabilitation, recognized the importance of the Museum remaining open in a city facing such dire straits, and chose to sponsor the Museum’s Road to Victory Capital Campaign.

The Museum is fortunate to have the opportunity to honor Lt. Commander Alden “Doc” Laborde and his courage through the Laborde Services Gallery and the upcoming New Naval Warfare gallery in Road to Tokyo. We are grateful for the Laborde family and the Almar Foundation for their support of our programs and capital expansion.