In the past two weeks the news has been full of announcements of the 2014 Nobel Prizes. The efforts of the Allies to develop a nuclear bomb in the Tube Alloys and Manhattan Projects involved 21 Nobel Prize winners.

James Chadwick, a British scientist who spent World War I in an internment camp in Germany, led the Tube Alloys project, and won the Nobel Prize for Physics in 1935 for his discovery of the neutron. Chadwick was born 20th of October in 1891.

Alfred Nobel was born 21st of October 1833. His parents were very poor, and of their 8 children only Alfred and three others survived to adulthood. Immanuel Nobel, Alfred’s father was an engineer in Stockholm, and the son learned a great deal about engineering and especially explosives from the father. The family owned a factory that produced armaments for the Crimean War, but which struggled to make money when the war ended. Alfred and one of his brothers took over the factory operations and made it profitable. Alfred Nobel invented the blasting cap in 1865, dynamite in 1867, and ballistitite (a forerunner of cordite) in 1887. The growth of family factories using their patents for explosives made Alfred and his family very rich.

In 1896, without his family’s knowledge, Alfred Nobel made a will assigning 94% of his assets (about 1.7 million pounds at the time) to a trust to give annual prizes in 5 areas. Three prizes were for science (Physical Science, Chemistry, and Medicine or Physiology), one for literature, and one that is now called the ‘Peace Prize.’ In his will Nobel said the prize ‘is to be given to the person or society that renders the greatest service to the cause of international fraternity, in the suppression or reduction of standing armies, or in the establishment or furtherance of peace congresses.’

Alfred Nobel’s intentions in establishing these awards has been a topic of speculation in the decades since his death in 1896. It might be that he felt guilty for the damage to individuals and societies caused by his inventions. A premature obituary read ‘Dr. Alfred Nobel, who became rich by finding ways to kill more people faster than ever before, died yesterday.’ It might be that his only concern was his reputation, and the reputation of his family.

Join us this coming weekend, October 23-26, 2014, at Lakefront Airport in New Orleans for some science about flight at the WWII Air Power Expo, presented in partnership with the CAF. 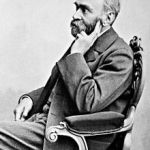 Alfred Noble, presumably thinking about how much of his wealth to put in trust for the Nobel Prizes. 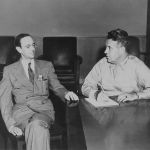 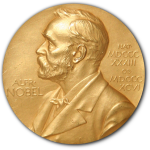 The solid gold medallion of the Nobel Prize.

All images from Wikimedia Commons.

5,000 New Photographs Added to The Digital Collections of The National WWII Museum Looking Back on Victory in Europe: Normandy Tour September 2014