This morning we were visited by artifact donors from Texas who made the trip to New Orleans to share material with the Museum. We sat and went through the collection together, looking over the service material from Albert Dean Bryant from Midland, Texas. Bryant served with the 87th Cavalry Reconnaissance Squadron of the 7th Armored Division. Seventy years prior to his daughter’s visit, on 11 September 1944, Bryant wrote a letter home to his family. He describes the weariness and restlessness of battle, “There are things that happen over here which takes complete control over your mind…”

He writes of running remaining Germans out of French towns and the liberation of those towns: The aftermath was something which almost made the danger & unpleasant things we had to endure worth it—People by the hundreds standing in the streets with hands upraised & shouting & laughing & crying with appreciation for being liberated—Bottles of wine and champagne (which would cost $20.00 in the US) were freely given to us as we went through the streets (bottles which had dirt & dust on them to show they had been buried or hidden for years from the greedy Boche). 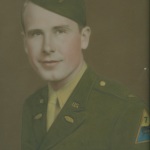 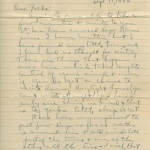 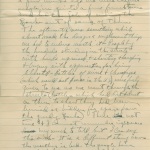 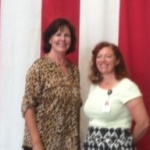 A little over one month later, on 27 October 1944, Bryant was captured and would spend the remainder of the war as a POW of the Germans.

Interested in learning more about donating artifacts to the Museum? See our information on how to Donate an Artifact.