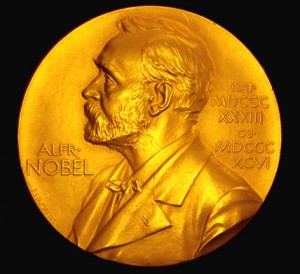 The Nobel Prize for Physics was awarded this morning to François Englert and Peter W. Higgs for the theoretical discovery of the Higgs boson, the part of the atom thought to be the fundamental to understanding the nature of the universe. The award recognizes the two theoretical physicists who, in 1964, first proposed the existence of such a subatomic particle. Supported by experiments at CERN’s Large Hadron Collider, the almost 50-year quest to find the Higgs boson has been recognized by the Nobel Committee. This is certainly not the first instance of the international physics community uniting for a common cause. It harkens back to the incredible story of another Nobel Laureate, Niels Bohr, and how a flask of acid protected his Jewish colleagues from the Nazi regime during World War II.

During the 1930s, Niels Bohr opened the doors of his Institute of Theoretical Physics in Copenhagen to Jewish physicists escaping the persecution of the Third Reich. Two scientists, Max von Laue and James Franck, left their gold Nobel medals with Bohr rather than have them confiscated and destroyed by German authorities. Gold was a precious commodity and smuggling gold out of Germany was a grave offense. The medals became a concern to Bohr following the occupation of Denmark in the spring of 1940, as the names of the two Nobel Laureates were engraved on the medals. Their discovery by the invading Nazi forces would put Bohr and his Institute in jeopardy and spell certain death for von Laue and Franck. 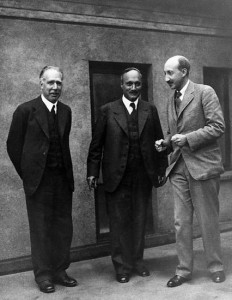 Bohr and his Hungarian colleague, George de Hevesy, franticly devised a plan to hide the Nobel medals from the approaching German forces. De Hevesy suggested burying the medals but Bohr feared the Nazis would dig up the garden and ransack his Institute, ultimately discovering the contraband.  Chemistry provided the answer; de Hevesy would dissolve the 23 karat gold medals in nitric and hydrochloric acids, forming a solution called aqua regia. Gold is distinctly unreactive and in order to coax the gold atoms to separate and combine with other elements, the two acids must be used in tandem. The resulting bright orange liquid containing the dissolved Nobel gold was placed on a high shelf where it remained throughout war, safely hidden from German authorities.

To his great surprise, de Hevesy returned to the lab following the war to find the flask of aqua regia just as he had left it. The chemist reversed the reaction and extracted the gold, which was delivered to the Royal Swedish Academy of Sciences on January 24, 1950. The Nobel Committee recast the medals for von Laue and Franck and at a ceremony at the University of Chicago on January 31, 1952, Professor Franck was reunited with his Nobel medal.

Special Exhibit: We Can. . .We Will. . .We Must! Allied Propaganda of WWII Donor Spotlight: The Selley Foundation