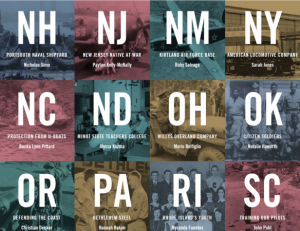 As part of the Grand Opening of the US Freedom Pavilion: The Boeing Center, 51 middle and high school students, representing every state and the District of Columbia will attend the Dedication Ceremony as official representatives of their home states. The students were chosen from among each state’s qualifiers to the 2012 National History Day Contest. As part of their honor, each student chose a local topic to research that tells the story of one aspect of World War II in his/her state.

The result is A Salute to Freedom, a collection of 51 illustrated stories of home front service, individual effort and overcoming the odds. To build this site, the students began last summer by selecting an aspect of WWII in their state that appealed to them. While in consultation with Museum staff, the students refined their topics and contacted organizations in their states that could assist.

Alyssa Kozma of Minot, North Dakota did not have to look far. In her hometown, she contacted Minot State University, formerly known as Minot State Teachers College which served as a US Navy training ground from 1942-1945. Specializing in the Navy’s V-5 Pilot Training Program and the V-12 Training Program, Minot State Teacher’s College made a substantial contribution to a highly skilled military. Alyssa spoke with representatives from Minot State University and gained access to rarely-seen images from the university collection. The photos help illuminate a proud part of North Dakota history. 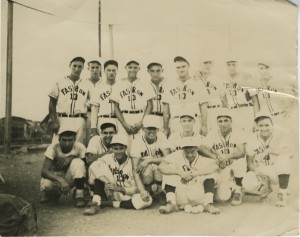 Payton Kelly-McNally of Pittstown New Jersey decided to look more deeply at his own family’s contribution to World War II. Payton’s great grandfather, Richard Burns served as a naval waist gunner in the Pacific. Flying combat patrols, Mr. Burns was able to experience China, Japan, Korea and Guam during his time in service. Payton was fortunate to spend quality time with his great grandfather and to hear details of the war. Payton credits his “great grampy Burns” for inspiring a deep interest in history.

Two students chose to look at what the war did for the future of their states. Yelim Youm of Columbus, Georgia and Roy McKenzie of Prairie Grove, Arkansas became keenly aware of how the war transformed their rural states and gave minorities a chance to prove their capabilities. Yelim made great use of the Georgia State Archives in crafting a photo essay that shows women and African Americans in the defense industries and training for combat. Roy’s contribution takes a long-term look at several aspect of life in Arkansas before, during and after the War. In particular, Roy found that Arkansas’s tradition of “womanless weddings” had a role to play in keeping morale up by entertaining the troops.

There are 47 more stories available on A Salute to Freedom. Stories of air fields, decorated war heroes, manufacturing centers and transportation hubs all help bring to life the contributions of all Americans to the war that changed the world.