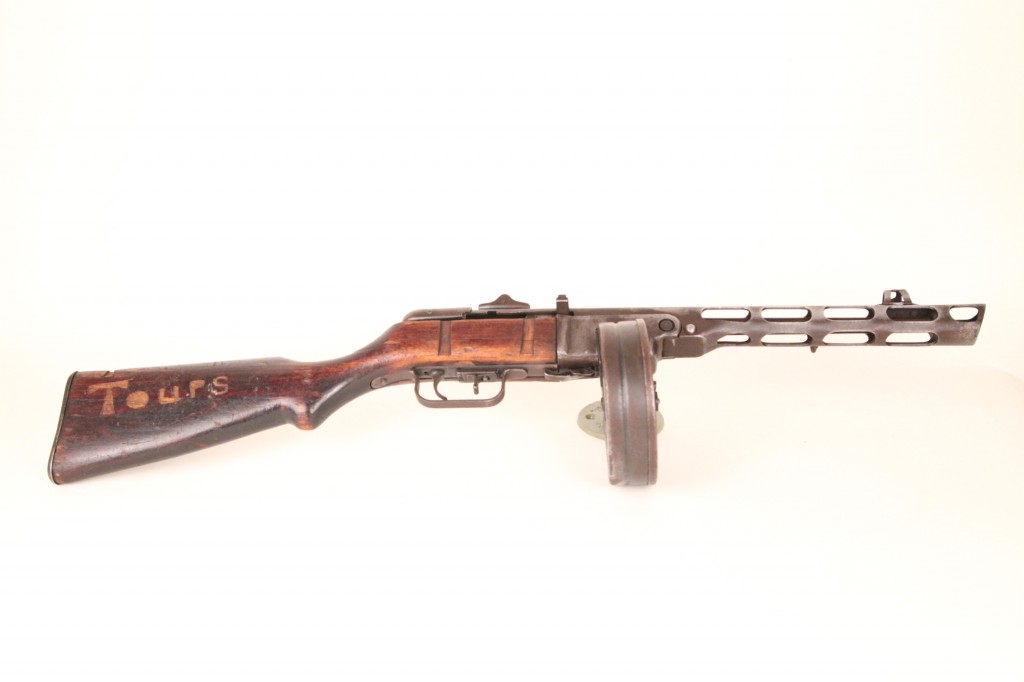 A PPSh-41 from the Museum’s collection. On loan courtesy of the Louisiana State Museum

Today marks the beginning of the Second Battle (of many) for Kharkov. The Germans had first taken the Soviet city in October 1941. The May 1942 battle was the Soviet attempt to retake the city, which failed by the end of the month though they would succeed less than a year later only to lose the city to the Germans again before finally being liberated in summer 1943. For this 70th anniversary, we will highlight one of the soviet weapons on the Museum’s collection: the PPSh-41

The submachine gun was largely an innovation of the Second World War, and a very significant one at that. It allowed for more mobility than a machine gun, and more firepower than a rifle. Though smaller and lighter than their big brothers, the firepower of submachine guns is not sacrificed. Perhaps most importantly in a wartime economy, they were generally very inexpensive to make. Think of the British Sten and American M3 “grease guns.”

The PPSh-41 was first designed in 1941 and would become one of the most prevalent small arms of the war with approximately 6,000,000 manufactured by V-E Day. The weapon was ideal for street fighting with a range of 150 yards, and was so popular with the Germans that they began training on the weapon and carrying them in significant numbers. The PPSh-41 could fire 900 rounds per minute at its best, much faster than the average sub’s cyclic rate of 600 rpm. The weapon’s best advantage was its suitability for battle on the icy Eastern Front. Where most weapons would prove useless in the slush and mud of that theater, the PPSh-41 was rugged and sturdy, able to withstand dirt, water, and most importantly, snow. The drum magazine held 71 rounds, though a smaller stick magazine was also available. The weapon was used in subsequent conflicts by Soviet satellite states for decades.

Find out how you can see the PPSh-41 and other weapons from the Museum collection up close with a Call of Duty VIP Tour.