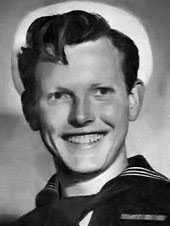 On the night and early morning of August 8th and 9th 1942, the life of nineteen-year-old Signalman 3rd Class Elgin Staples of Akron, Ohio was saved by someone over 8,000 miles away.  Serving aboard the cruiser USS Astoria (CA-34) in support of the landings on Guadalcanal, Staples and his crewmates suddenly found themselves illuminated by spotlight and under attack by a force of Japanese cruisers north of Savo Island.  At approximately 0200 hours, the Astoria’s number one eight-inch turret was hit and exploded, sweeping Signalman Staples into the air and overboard.

Signalman Staples, dazed and wounded in his legs by shrapnel, kept afloat thanks to an inflatable rubber life-belt he had donned shortly before the explosion.

At approximately 0600 hours, Staples along with other survivors were rescued by the destroyer USS Bagley (DD-386) and returned to assist the Astoria, which was heavily damaged, but attempting to beach itself in the shallow waters off Guadalcanal.  These efforts failed, as Astoria took on a dangerous list before finally sinking at approximately 1200 hours, putting Staples back into the water, still wearing the same life-belt.

Rescued a second time by the transport USS President Jackson  (AP-37), Signalman Staples was first evacuated to Noumea in New Caledonia before being given leave to return home.  It was while on board the President Jackson that Staples first examined the life-belt which had saved him closely and was surprised to find that it had been manufactured in his hometown of Akron, Ohio by the Firestone Tire and Rubber Company. He also noticed an unusual set of numbers stamped on the belt.

Returning home to Akron, Signalman Staples thought to bring along the life-belt that had saved him to show his family.

After a quietly emotional welcome, I sat with my mother in our kitchen, telling her about my recent ordeal and hearing what had happened at home since I had gone away. My mother informed me that “to do her part,” she had gotten a wartime job at the Firestone plant. Surprised, I jumped up and grabbing my life belt from my duffel bag, put it on the table in front of her.

She leaned forward and taking the rubber belt in her hands, she read the label. She had just heard the story and knew that in the darkness of that terrible night, it was this one piece of rubber that had saved my life. When she looked up at me, her mouth and her eyes were open wide with surprise. “Son, I’m an inspector at Firestone. This is my inspector number,” she said, her voice hardly above a whisper. 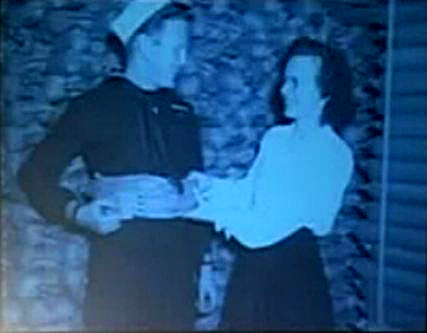