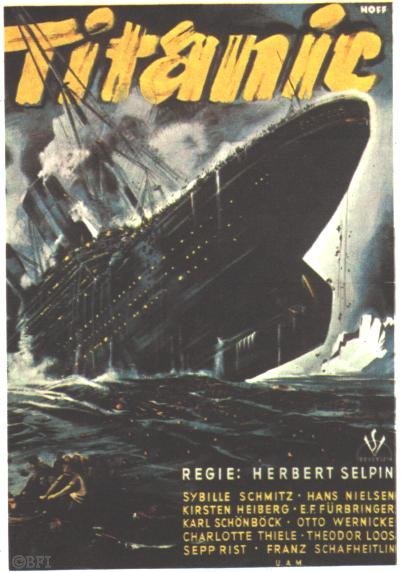 On April 15, 1912, the luxury liner RMS Titanic met a tragic end on her maiden voyage after striking an iceberg in the North Atlantic Ocean. It is estimated that more than 1,500 passengers and crewmembers lost their lives in an event that has captivated the public for a century.

Since then, the story of the Titanic has worked its way into popular culture with a number of fictionalized accounts, the most famous being the 1997 James Cameron blockbuster starring Leonardo DiCaprio and Kate Winslet. But an earlier WWII-era German film, released in 1943, actually used the story of the ill-fated vessel as a means of propaganda to malign British and American ideals as being overly-materialistic, greedy and capitalistic.

Made by Tobis Productions for the Universum Film AG (UFA) studio in Berlin, Titanic was released in December 1943. The film would later be banned by Propaganda Minister Joseph Goebbels for a number of reasons, including the fact that late in the war, the last thing he wanted to expose citizens to were scenes of mass panic and death. Additionally, a scene where steerage passengers remained locked behind gates with no hope of escape was deemed too similar to real-life scenes being played out in concentration camps.

The plot puts the blame for the tragedy squarely on selfish White Star stockholders, who throw caution and concern for passengers and crew to the wind in the promise of a financial windfall. Additionally, the film’s protagonist, a fictional German First Officer named Herr Petersen, tries to prevent the careless behavior that leads to the sinking and later selflessly attempts to rescue those on the ship. German passengers in steerage go to their death with a quiet dignity and courage, while British and Americans resort to any means to save themselves while in a state of full-on panic.

The film ends with this epilogue to the tragedy. “The deaths of 1,500 people remains un-atoned, forever a testament of Britain’s endless quest for profit.”

The film was the most expensive German production up until that time and was fraught with disasters of its own. Including the arrest of the original director, who had been overheard criticizing the film’s marine consultants (German officers) for being overly preoccupied with the female actresses. He was reported to the Gestapo and soon after his arrest, in what was dubiously ruled a suicide, was found hanged in his cell. Additional delays occurred when the original version of the film was destroyed in a bombing raid. The stand-in for this fictional Titanic was the SS Cap Arcona (which was sunk on May 3, 1945, by the RAF with an estimated death toll of 5,000).

The film would fade in and out of obscurity for several years, often reemerging with the more-propagandized elements censored out. The complete and uncensored version was released on DVD in 2005.

Teaching WWII Through Poetry Angels of Bataan and Corregidor