In February 1942, President Roosevelt issued Executive Order 9066, creating military sections from which enemy nationals were to be excluded. You can read more about Executive Order 9066 here (will open in a new window). On March 18, 1942, the War Relocation Authority was created for the purpose of aiding families in the required relocation of their homes as according to Executive Order 9102.  Initially, the migration was basically an unfunded mandate to move; when the government recognized that there were several obstacles that made this incredibly difficult for most families, the WRA was created in order to ease the financial and logistical burdens of the required move.

A month previous, President Roosevelt had enacted a ban on the presence of Axis nationals (Germans, Italians, and Japanese) in militarily important areas, and required that those who lived in or near such areas move out of it. This essentially included the entire state of California, where the majority of Japanese lived and worked. While several-thousand Germans and Italians living in the US were also relocated, more than 100,000 Japanese–the majority of whom were American citizens–were interned in ten relocation camps.

The fact that American citizens of Japanese descent were included in the relocation while Germans and Italians who held US citizenship were left alone, reflects the continued paranoia and distrust of the Japanese as a people following the attack on Pearl Harbor, the Ni’ihau Incident, and the subsequent bombing of the California coast by a Japanese submarine that only intensified the fear of a fifth column.

American propaganda also maintained that no one was a prisoner, despite that fact that all camps were fenced in and under armed guard at all times, and families were housed in “apartments” measuring not more than 20’ by 25’.

A view of the inside of the small apartments allotted to interned families. Poston War Relocation Center, Arizona. 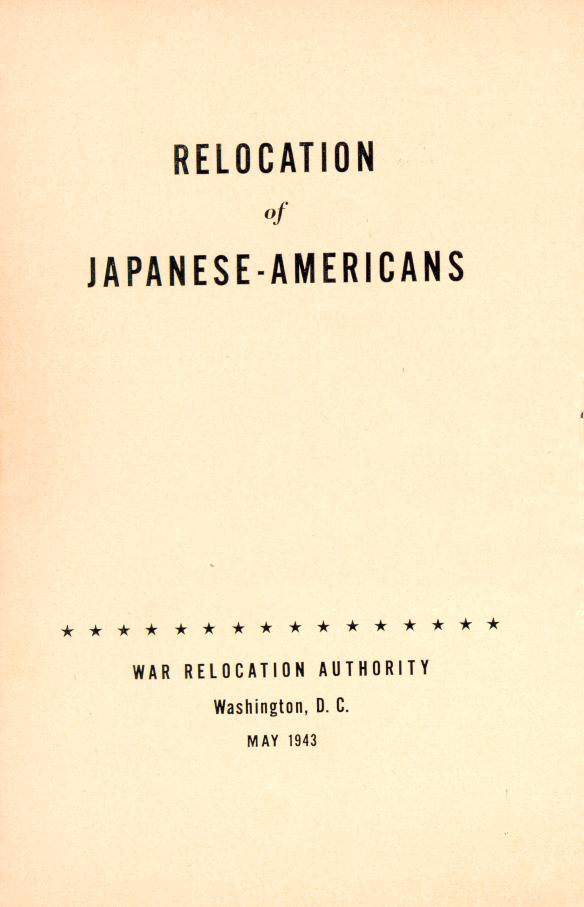 An excerpt from the above pamphlet issued by the WRA in May of 1943:

In the interest of both accuracy and fairness, it is important to distinguish sharply between the residents of relocation centers and the militarists of Imperial Japan. Two-thirds of the people in the centers are American citizens, born in this country and educated, for the most part, in American public schools. At all centers, the residents have bought thousands of dollars worth of war bonds and have made significant contributions to the American Red Cross. Many of them have sons, husbands, and brothers in the United States Army. Even the aliens among them have nearly all lived in the United States for two decades or longer. And it is important to remember that these particular aliens have been denied the privilege of gaining American citizenship under our laws.

It is also important to distinguish between the residents of relocation centers and civilian internees. Under our laws, aliens of enemy nationality who are found guilty of acts or intentions against the security of the Nation are being confined in internment camps which are administered not by the War Relocation Authority but by the Department of Justice. American citizens suspected of subversive activities are being handled through the ordinary courts. The residents of the relocation centers, however, have never been found guilty–either individually or collectively–of any such acts or intentions. They are merely a group of American residents who happen to have Japanese ancestors and who happened to be living in a potential combat zone shortly after the outbreak of war. All evidence available to the War Relocation Authority indicates that the great majority of them are completely loyal to the United States.

A 1944 WRA-produced video regarding internment.

While by today’s standards of political correctness this seems outrageous it was a necessary and important mandate. Far better to err on the side of over protection than the alternative. It is a shame we cannot make such difficult decision today !