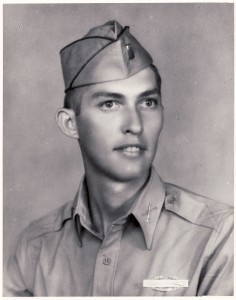 Colonel Van T. Barfoot, a Medal of Honor recipient from World War II, died earlier this morning at 92 years old. Always very patriotic, Barfoot joined the Army in 1940 before the start of the draft and by December 1941 was promoted to Technical Sergeant in L Company, 157th Infantry, 45th Infantry Division. In July 1943, Barfoot took part in the invasion of Sicily and fought at Salerno just two months later. In January 1944, Barfoot landed at Anzio and with his unit pushed inland.  By May his unit held a defensive position near the town of Carano, Italy. During his time there, Barfoot lead numerous patrols during the day and night over the next four weeks in an effort to probe the German lines. While out on patrol, he learned the layout of the German minefields, which would prove important for a future attack. On May 23, his company led an attack against the Germans. As a squad leader, Barfoot requested to lead his squad to the German flank, going through some of the German minefields to get to the enemy positions with minimal casualties.

Barfoot led his men to the minefields and placed them in a position to defend a possible withdrawal. Being so familiar with the area, he personally moved through ditches and depressions in the terrain toward the enemy. Barfoot reached the first enemy machine gun on the far right flank and destroyed it with a hand grenade, killing 2 and wounding 3 Germans. He continued along their defensive line to the next gun emplacement and immediately killed two soldiers with his Thompson sub-machine gun, while wounding and capturing three others. As he approached the third gun emplacement, the Germans there surrendered to him. He left the prisoners there for his support squad to pick up and proceeded to “mop up” the area and captured a few more prisoners. In total, Barfoot captured seventeen men during his attack.

Barfoot and his men then occupied the German positions. Later that afternoon, the Germans launched a fierce counter attack on Barfoot’s position. With a bazooka, he knocked the tracks off of the tank closest to his position, causing the other two tanks to move away towards his flank. As the crew of the disabled tank attempted to dismount, Barfoot quickly grabbed his Thompson submachinegun and eliminated them. Along with the attack that afternoon, Barfoot also discovered several abandoned German artillery pieces and disabled one of them. At the end of the day, Barfoot aided two of his severly wounded men and carried them to a safe position some 1,700 yards away.

Not long after this action, Barfoot received a promotion to 2nd Lieutenant and soon afterwards learned that he was to be awarded the Medal of Honor for his actions on May 23, 1944. Given a choice to return to the United States for the award or to be awarded in the field, Barfoot felt it was important not to leave his men. On September 28, 1944, Lieutenant General Alexander Patch awarded him the medal in Épinal, France (see photos below). 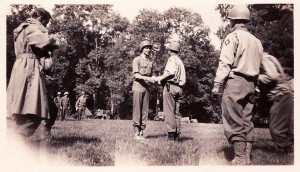 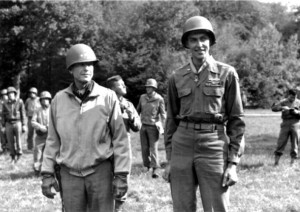 Van T. Barfoot retired from the US Army as a Colonel, after also serving in the Korean and Vietnam wars. Colonel Barfoot has been a long time friend of The National World War II Museum. He was awarded the Museum’s American Spirit Award in 2008 and attended our most recent Grand Opening event in 2009. Colonel Barfoot’ s story will live on within future exhibits of the museum that will be featured in our US Freedom Pavilion and the Museum’s Campaigns Pavilion in the near future.

It was personally a great honor to know Colonel Barfoot and to be able to call him a friend. I will always remember his unique sense of humor, his patriotic feeling towards this country and his devotion to God. We have lost another great warrior and hero of World War II. While he may be gone, he will never be forgotten.

I wish all the men and women of our greatest generation should have a bio told about them and their service to our great country and to us. So many of them were such heroes, but would never see themselves as such. My dad served in WWII. All I know is that he drove artillary trucks, came under fire once and was hit with shrapnel in his leg, drove a car in the Big Three Conference, smoked a cigar with Winston Churchill the night before the conference, and had gotten gangreen so bad they wanted to take off his foot, but he obviously didnt want that to happen so he left the hospital and never returned the next day for it. Dad never spoke of anything more then those things when I would ask him about his service over there. I know many men (and women) dont like to relive some of the events they went through during their stay, but I have always wondered. Guess thats normal. My dad died in Feb 1996, and never got to see the WWII Memorial in Washington, D.C. I did however register his name through the computer for the time he was there and the unit he was in. I have the utmost respect for any soldier, in any war, and any length of time they served. My own kids are also raised to honor and respect every soldier for all they do to defend our country and defend our freedoms that we as Americans have. Without all the brave souls, from the beginning of our country to our current time, we would not have all we have today. God bless each and every one who fought and returned home, and those that fought and never came back. You will never be forgotten. You are the true definition of what a HERO is. From the bottom of my heart, THANK YOU!!!

I agree with Jayme that all the men and women of our greatest generation should have a bio told about them and their service to our great country and to us. So many of them were such heroes, but would never see themselves as such. I believe the same goes for those who have served since then to those currently serving too. My Husband served in the Army for about 20 years and deployed to Iraq in 2004. He doesn’t talk much about what happened over there either. I can understand their silence though. In part I believe they feel that they are protecting their loved ones from the horrors they faced in war. Sadly, so many of their stories/experiences will go to the grave with them.
I also have the utmost respect for any soldier, in any war, and any length of time they served. My own kids are also raised to honor and respect every soldier for all they do to defend our country and defend our freedoms that we as Americans have. We would not have all we have today if it weren’t for all the brave souls who have served from the beginning of our country to our current time. God bless each and every one who fought, who returned home, and those that fought but never came back. You will never be forgotten. You are the true definition of what a HERO is. Though no amount of thanks can ever repay what America owes to each of you, I send a big heart felt THANK YOU to each and every one of you!!!

I want to share a couple poems I wrote that I think kinda fit here…..

The Side We Never See

Few veterans let us see,
A glimpse into their lives,
What they lived through,
And what they survived.

Some were prisoners,
Some gave their all,
The rest carry a burden,
That’s never too small.

Memories of things,
They wish to forget,
The pain they hold,
Some filled with regret.

They wake with the sweats,
Sometimes with screams,
They come out of nightmares,
Horrible things that they’ve seen.

Images etched into their minds,
The hauntings to forever last,
Questioning themselves,
On things from their past.

Places we’ve never been,
They led us to be free,
Pains we’ll never know,
The side we never see.

We Can Never Repay

Those who are home and those deployed,
Those who sacrifice, giving their all,
Those who come back wounded and scarred,
We know your tolls paid are never small.

Endless days, nights and weeks of no sleep,
We know your efforts never lack,
Months and years spent far from home,
But thank you is all we have to give back.

What you so selflessly give of your life,
Is far beyond what most comprehend,
But from those who know and understand,
Heart felt thanks are all we can send.

Please know that we really appreciate,
Though not everyone will stand and say,
Thanks for the freedoms you defend,
A debt we can never repay.

They just don’t make many men like this anymore. We’ve lost another American Hero and more and more are lost each day. Take time to shake that old man or woman’s hand you see wearing a veteran hat in the grocery story and say “Thank you.” Most are surprised to receive the thanks, some get choked up, and some may brush it off but all appreciate it.

May he rest in Peace.

My Dad, one of the Company I boys, served with Colonel Barfoot from North Africa through Anzio, France, into Germany all the way to the final insult to humanity that was Dachau. I had the honor of meeting Colonel Barfoot at a 157th Infantry reunion in Denver a few years ago. He was a gracious man and a pleasure to speak with. Farewell to an American hero.