On this day 70 years ago the Naval Construction Battalions, now often called “Seabees,” were born. They have paved the road to victory for seventy years.

After the Japanese attack on Pearl Harbor when the United States officially entered World War II, the civilian contractors who had been doing much of the construction for the Navy could no longer work overseas. International law prohibited civilians from fighting the enemy in combat areas. If they defended themselves, they were not protected under the Geneva Convention, which meant they could be executed as guerrillas. The answer to this problem was to create a Naval construction force that could defend itself by using military tactics and complete construction missions in combat conditions. 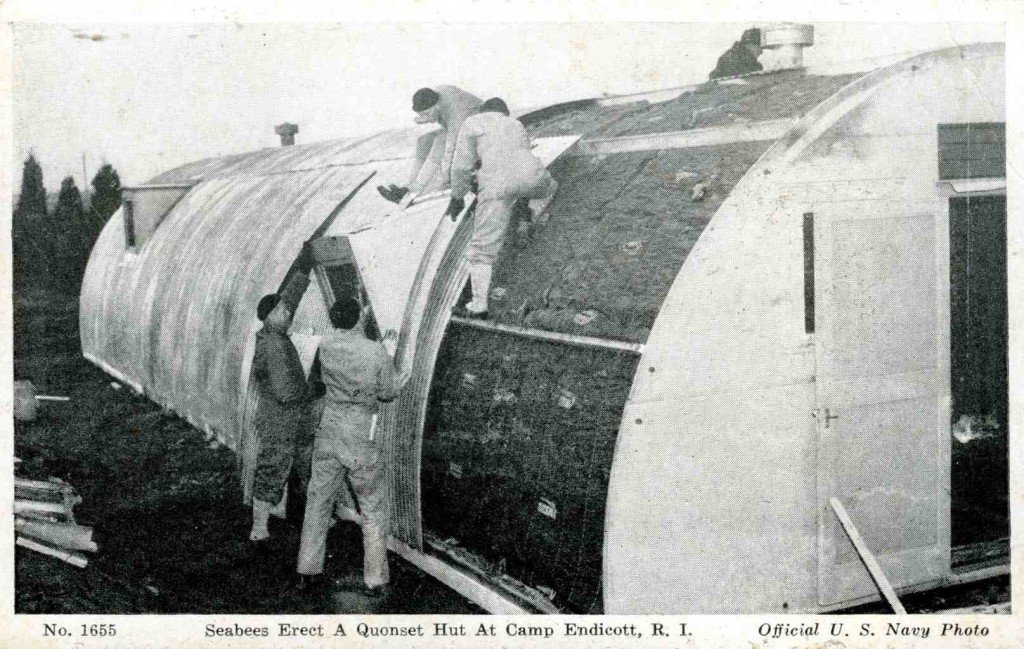 Early in January 1942, the first construction units were organized at a newly constructed naval base at Davisville, Rhode Island, now part of North Kingston. Highly-skilled construction workers and engineers were recruited, and whole construction companies volunteered their men and equipment; some 250 recruits were gathered to establish the new Construction Battalions. Because of the emphasis on experience and skills rather than physical standards, the average age of “Seabees” during the early days of the war was thirty-seven.

The First Naval Construction Battalion, later redesignated as the 1st Construction Battalion Detachment due to its small size, deployed from the United States and left Davisville on 17 January 1942. The men of this battalion called themselves “Bobcats” after the code name BOBCAT, given to the island of Bora Bora where they arrived one month later. Their mission was to construct a fueling station that would service the ships and planes defending sea lanes to Australia.

While the “Bobcats” labored on Bora Bora, the 2nd and 3rd Construction Battalion Detachments were organized. Less than five months after the Bobcats arrived on Bora Bora, the 2nd Detachment was sent to Tongatabu in the Tonga Islands, and the 3rd Detachment to Efate in the New Hebrides. These two islands were also on the supply route to Australia, and were being used as a staging area for a counterthrust by the Allies against Japanese forces in the Southwest Pacific. Here the Seabees constructed fuel tank farms, airfields, supply depots, and other facilities to support military action in the Coral Sea and Solomon Islands.

On 5 March 1942, all personnel of the Naval Construction Battalions were officially nicknamed “Seabees,”  from the initial letters of Construction Battalion (CB), by the Navy Department. Admiral Moreell personally furnished the Seabees with their official motto: Construimus Batuimus – “We Build, We Fight.” 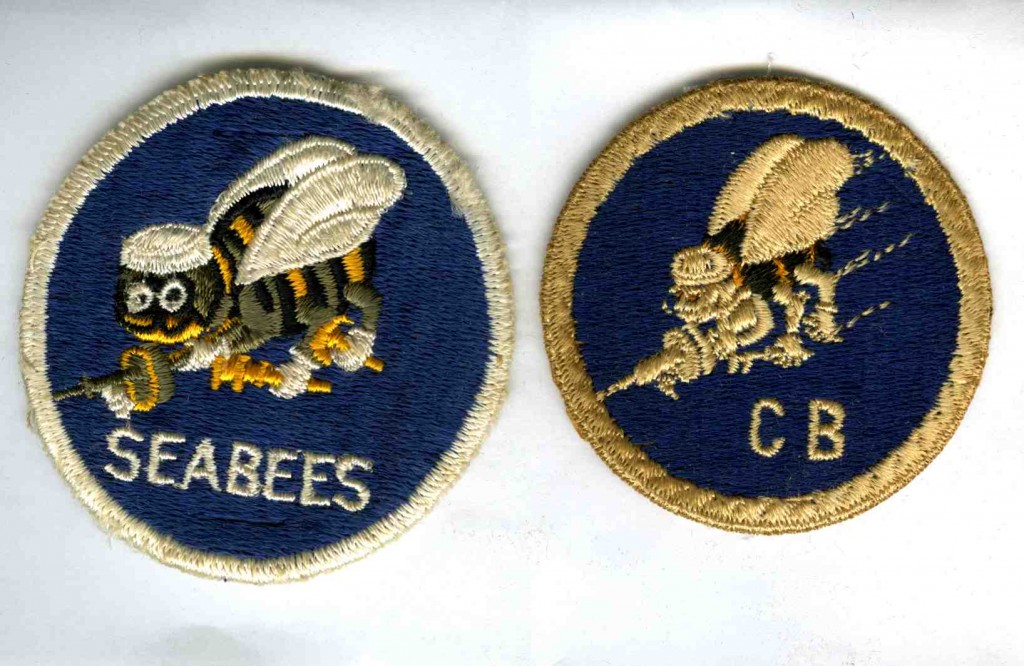 The Seabees’ mascot is “The Fighting Bee.” It was created by Frank Iafrate, a native of North Providence, Rhode Island, who was a civilian file clerk with a talent for caricatures. He designed the original Seabee logo in early 1942. Here is the story: “Early in January 1942, I was working at the Naval Air Station in Quonset Point, Rhode Island I became known around the base for the caricatures I drew of various officers. One day a Navy lieutenant came in. He was the officer in charge of some 250 recruits who had been brought in to the newly established Naval Construction Battalions. He had heard of my caricatures and asked me if I could produce a ‘Disney-type’ insignia to represent the CBs. He explained that while they would support the Marines, they would not be an offensive group, but could defend themselves if they had to.”

“My first thought was the beaver, a builder. But then I did some research, and found out that when a beaver is threatened it runs away. So, the beaver was out. Then I thought of a bee–the busy worker who doesn’t bother you unless you bother him. But provoked, the bee stings. It seemed like an ideal symbol.”

“The rest came easily. I gave the bee a white sailor’s cap, various tools to show his construction talents, and finally a Tommy gun to show his fighting ability. I made the bee a third-class petty officer (E-4) with the 1942 Naval insignia used by the first Seabees on each arm … a machinist’s mate, a carpenter’s mate, and a gunner’s mate.”

“I originally put the C.E.C. insignia on each wrist of the bee to show that he was part of the Navy Civil Engineer’s Corps (this was eventually dropped from the design). And I put the letter “Q” for Quonset on the outer circle of the insignia.”

“The insignia drawing took me about three hours one Sunday afternoon. The next morning, I showed it to the officer in charge. He showed it to the captain, who sent it off to Admiral Ben Moreell, the chief of civil engineers in Washington. It turned out that Admiral Moreell was about to start a nationwide campaign to create an identity for the new Construction Battalions. When he saw my sketch he requested only one revision: that the ‘Q’ in the insignia be changed to a hawser rope, for national recognition.”

“The bee as a symbol for these men who worked together at sea naturally led to the name ‘Seabees.’ That’s how the name was created–in Rhode Island, early in the war. And this is how we recognize that though and talented group know as the ‘Seabees’ today.”

Later in 1942, Iafrate enlisted in the Seabees himself. He served as a Chief Carpenter’s Mate in a Construction Battalion Maintenance Unit. After the war, he pursued a career in graphic design in Providence. The creator of the Seabee passed away on 30 March 2000.

Admiral Moreell personally presented the question to the Secretary of the Navy. On 19 March 1942, Secretary William Knox deliberated the idea and gave the office of the Civil Engineer Corps the authority to oversee both enlisted men and officers involved in the Construction Battalions. The Secretary’s decision, which was incorporated in Navy regulations, removed a major roadblock in Seabees operations.

After December 1942, President Franklin D. Roosevelt halted voluntary enlistment, and men for the Construction Battalions had to be obtained through the Selective Service System. The range of the Seabees dropped, as did the skill level, with the younger recruits possessing only elementary skills when compared to the more honed skills of the older members. Approximately 325,000 men, from 60 different trades, ages 18-60, would go on to serve with the Seabees by end of the World War II. 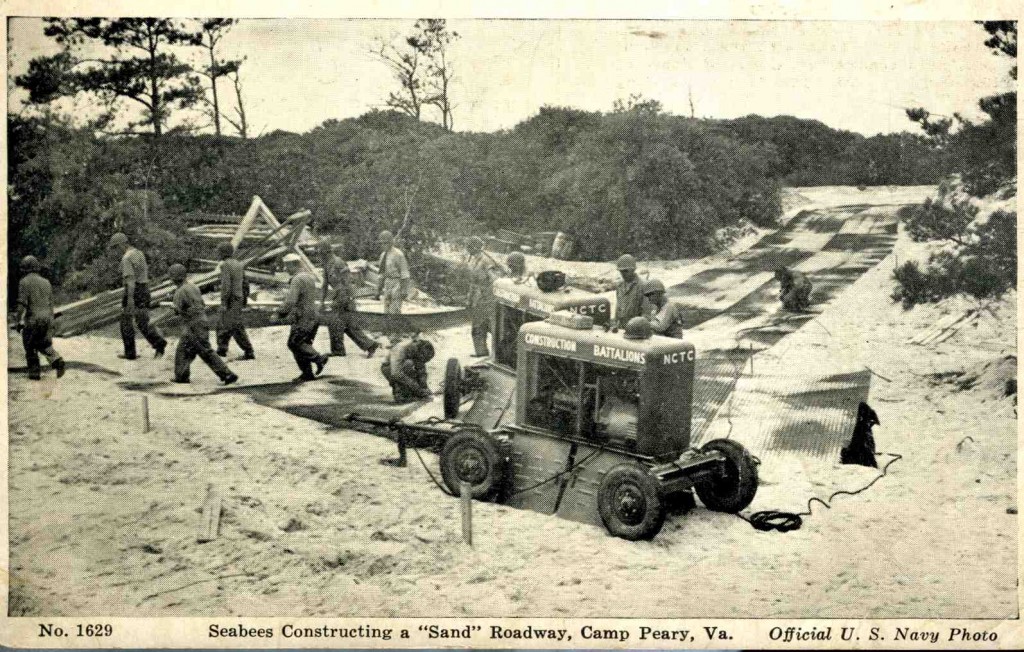 The back of this postcard reads: “‘Seabees’-those men whose job is to build and fight with the Navy-put together a roadway on the sand dunes of the Virginia coast where they are getting bases.” Gift of Beverly J. Shaffer, The National WWII Museum Inc., 2010.190.006

At Naval Construction Training Centers and Advanced Bases Depots established on the Atlantic and Pacific coast, Seabees were taught military discipline and the use of light arms. After completing three weeks of boot camp at Camp Allen, and later at Camp Peary–both in Virginia–the Seabees were formed into construction battalions or other types of construction units.

The usual procedure, however, was to ship the newly-formed battalion to an Advanced Base Depot at Davisville, Rhode Island, or Port Hueneme, California. There the Seabees received about six weeks of advanced military and technical training, underwent considerable unit training, and then were shipped to an overseas assignment.

More than 325,000 men served with the Seabees in World War II, fighting and building on six continents and over 300 islands. They participated in every major amphibious assault during the war. In the Pacific, where most of the construction work was needed, the Seabees landed soon after the Marines and built airfields, fuel tank farms, roads, bridges, Quonset huts for warehouses, hospitals, and housing. The topographical challenges caused many to say it could not be done, but the Seabees thought differently. Their best-known unofficial motto is the simple phrase “Can Do!”

See a YouTube video of Judy Garland singing “Can Do: Song of the Seabees”, lyrics below:

The Navy wanted men
That’s where we came in
Mister Brown and Mister Jones
The Owens, the Cohens and Flynn
The Navy wanted more
Of Uncle Sammy’s kin
So we all joined up
And brother we’re in to win

This post by Robert Janous, Assistant Curator at The National WWII Museum

Another great read and another lesson in my cap. Keep up the good work Robert!

Excellent information on Seabee history. Great men. Many early Seabees were fathers prior to joining up. A few were grandfathers. As you read above these fellows were skilled craftsmen from many trades. Knew many tricks of their trade which lead to efficiency overall. Remarkable citizens of the U.S. of A.
I was a Seabee from October,1942/January,1946. A twenty year old with no trade. What an education. Served Kodiak to Guam.

A first class group. The first Seabees gathered at Norfolk, Va. and Davisville, Rhode Island in 1942. The average age was 37 years old. Many were fathers and a smattering of grandfathers. The Navy was looking for skilled craftmen, such as carpenters, electricans, machine operators and on and on. They were given ratings commensurate with their abilities. CAN DO is very true. I was 20 years old and a member of this organization. What an education. Served from October ,1942 to January, 1946. Kodiak to Guam