What sets the Holocaust apart with a special significance is not just the unique Nazi effort:  for the first time in history, a powerful state decided and implemented a planned, deliberate policy to use all available resources to kill an entire people, who did not pose a military, economic or political threat, based upon their identity.

The racial philosophy by which Hitler interpreted world history had a strong, clear idea of the great contribution which Judaism had made to humanity.  An omnipotent and monotheistic Deity had created humanity in its image, and intended humanity to uphold the moral framework of the universe.  In their faith that they were chosen by God for these revelatory truths, the Jews thus became a covenanted and chosen people, representing a God of justice, compassion and love on earth.  In the worldview of Hitler, in which the instinctual, virile and barbarian Aryan Germans were to inherit the earth, there could not be two chosen peoples.  Furthermore, Hitler believed the Jews had anticipated and cunningly neutered these more “natural” human impulses by creating in their religion a moral conscience for humanity, and installing the Fifth Commandment for humans to live by:  “Thou shalt not kill.”  This moral and religious system, Hitler believed, had first transmuted into Christianity, and then again had transmuted again into Communism.  Regardless of the actual record which Lenin and Stalin established in respecting individual liberties and lives, Hitler believed that communism was a Jewish-inspired philosophy designed to eliminate strong peoples within a sea of mediocrity.  The idea that individual life was sacred was completely anathema to the racist, xenophobic, nationalist and Volkish collectivist creed which the Nazis espoused.

Thus, the destruction of the value system which was the hallmark of Judaism would have to precede the physical destruction of the actual Jewish population.  The history of European anti-Semitism, going back centuries, was a deep seedbed for the Nazi ideology to take root in.  But the Nazis had a unique anti-Semitism which transcended this previous history on at least three counts.  First, Hitler chose to define Judaism not as a religion, which people could convert in and out of, but as a race.  Second, as the Nazi philosophy claimed that world history was to be interpreted as a competition between successful races, this meant that a successful race had to protect its “blood purity.”  Hitler accused the Jews, who had no homeland but had assimilated into other host societies, of parasitism.  He claimed that through intermarriage, the Jews had despoiled the bloodlines of healthy, host societal bodies, and undermined the Aryans and their rightful position as earthly rulers.  The 1935 Nuremberg laws which attempted in chaotic fashion to determine how much Jewish blood a person might have was a deadly serious business to the Nazis, as it also confirmed their own purity.  Third and lastly, this racialist philosophy of history showed in Hitler’s mind that successful races maintained a homeland.  The linkage of the need for German Aryan “lebensraum,” or living space in Eastern Europe, connected to the establishment in 1917 of the first Communist state in Soviet Russia; Hitler was resolved to smash the Communist system, eliminate the majority of the Jewish population from Europe, and grasp the Aryan promised land.

Hitler’s apocalyptic vision of a final showdown between the Aryan and the Jew, in his mind, gave his ideas the cast of a Holy War or Crusade with all of the future of Western Civilization at stake.  It is Hitler and his philosophy which are the central, prime movers of events that culminate in the Holocaust. 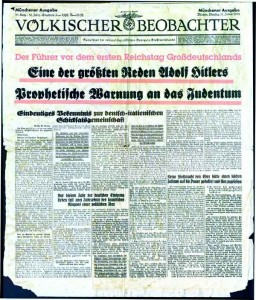 The British historian Ian Kershaw notes that while there is no administrative or systemic documentation which Hitler personally approved to launch the Holocaust (the Wannsee Conference itself was called by and administered by Reinhard Heydrich, Heinrich Himmler’s favorite SS man), the truth is that we do have a “smoking gun” document which set the stage for the Holocaust:  Hitler’s famous “Prophecy” speech of January 30, 1939.   Before the Reichstag, Hitler made the claim:  “Today I will once more be a prophet:  if the international Jewish financiers in and outside Europe should succeed in plunging the nations once more into a world war, then the result will be not the Bolshevization of the earth, and thus the victory of Jewry, but the annihilation of the Jewish race in Europe!”  Hitler referred to this passage at least a half dozen times into 1942 when discussing alternatives to the “Jewish question,” and after the Wannsee Conference decided the matter, continued to ask for progress reports of the Holocaust (even ordering that it be speeded up on occasions) until the end of the war.

The key element in the “prophecy” passage is the linkage between a race war and the war in Eastern Europe which Hitler was seeking.  Between 1939 and 1941, the Nazi regime remained focused on war and victory.  But with the military victories of this period came territorial acquisition and control of the peoples in those lands, including dramatically larger Jewish populations.  German Jews were less than one percent of the German population (approximately 500,000 people) when Hitler came to power in 1933, and by 1939 over 200,000 had fled Germany.  But with territorial expansion came increasing numbers of Jews:  over 200,000 from the Anschluss with Austria and then another 120,000 with the Sudetenland absorption from Czechoslovakia by early 1939.  But the German invasion of western Poland heightened the Nazi anxiety, as Poland had over 2 million Jews, including 330,000 in Warsaw alone.  To Hitler and the Nazis, obsessed with the “stab in the back” from Jewish elements on the Home Front which had supposedly ended the First World War in defeat, any Jewish population behind German lines represented an internal and repeat threat.  There is not room here to recite the build-up of Nazi policies towards mass murder by gas extermination here (including the T-4 project, the initiatives of the Gauleiters of the occupied territories, the economics of bullets and war, and the characterization of the Nazi soldier as a racial warrior in the “War of Extermination” Barbarossa campaign).  In each of these cases, it was a regime which was “working towards the Fuhrer,” discerning his will and implementing it in anticipation of his desired results.   The Wannsee Conference was the Final Solution to Hitler’s philosophy of history and political prophecy.  It systemically sought to eliminate the eleven million Jews of Europe; and by the end of the Second World War, over nine million people had perished within the German concentration camp system, including over six million Jews, or over half of Europe’s entire prewar population. 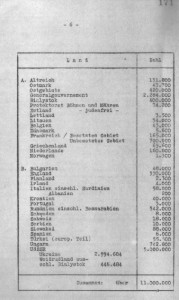 The Nazis believed that in eliminating the Jewish people they were preparing the way for a beautification of the human race; by eliminating a source of disease, a transition back to a human beauty as portrayed in classical antiquity would naturally occur.  Regarding this mass murder, Lucy Dawidowicz wrote of the Holocaust: “It was part of a salvational ideology that envisioned the attainment of Heaven by bringing Hell on Earth.”  As stated earlier, Hitler and his followers truly believed in their ideas and their actions.  The Wannsee Conference is a horrible confirmation of the fact that ideas have consequences.

What sets the Holocaust apart is encapsulated in the Nazi Death’s Head insignia which the SS troops wore on their black uniforms:  the unrelenting embrace of dehumanization and death, and the utter rejection of humanity, life, and any flicker of compassion or love.  Within Stalin’s Gulag Archipelago, women could at least survive by trading sexual favors with the guards for food, and it was recognized that children born within the camps had the right to live.  Not so in Hitler’s camps:  Jewish women could not trade their physical integrity for life, and children born to them were automatically put to death.  Over one million Jewish mothers and children were extinguished without remorse mercy, without exceptions, and without conscience.

This was the beautiful world which the Wannsee Conference sought to actively create, and which the United States and her allies fought and shed blood to end. 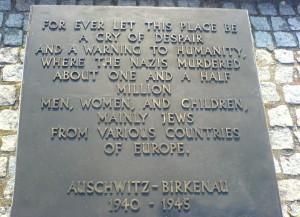 Dr. Keith Huxen is the Senior Director of Research and History at the National World War II Museum.

The wording is a bit problematic in spots. The Final Solution was not “decided” at Wannsee; the purpose of the conference was to inform agencies within the Reich government of a decision already taken, and coordinate implementation.

It is hard to even find the words here that would even attempt to describe this. It is almost impossible to contemplate any of this, and yet we know that it was hideously real. May this evil never ever happen again. Michael J. Seymour.

This a fascinating article, Dr. Huxen. And as an admirer of Sir Ian Kershaw’s books, I was quite impressed with your elucidations. Thank you for a very interesting read.