Execution of Bl. Jakob Gapp (1897 – 1943) Jakob Gapp was born in Wattens, Austria in 1897. He was a soldier in World War I. He joined the Marianist order in 1921 and was ordained a priest in 1930. He was the director of religious education in the Marianist schools. As the Nazi party came to power, Fr. Gapp saw a conflict between Nazi ideology and Christianity and spoke out loudly against the party. In 1933 the Gestapo ordered him to cease teaching religion. Gapp, however, continued to speak out against the Nazi party. Under increasing pressure, he fled to Spain. The Gestapo arrested him on a visit into France in 1942. On August 13, 1943 he was guillotined. He was beatified in 1996 by Pope John Paul II.

From 1933 to 1945, Nazi Germany carried out a campaign to “cleanse” German society of people viewed as biological threats to the nation’s “health.” Enlisting the help of physicians and medically trained geneticists, psychiatrists and anthropologists, the Nazis developed racial health policies that started with the mass sterilization of “hereditarily diseased” persons and ended with the near annihilation of European Jewry. Deadly Medicine: Creating the Master Race traces this history from the early 20th-century international eugenics movement to the Nazi regime’s “science of race.” It also challenges viewers to reflect on the present-day interest in genetic manipulation that promotes the possibility of human perfection.

This exhibition was produced by The United States Holocaust Memorial Museum and sponsored locally by the Tulane School of Medicine.

All events are free and open to the public.

Wednesday, August 8, 2012
6:30 pm – 8:00 pm
The National WWII Museum – Stage Door Canteen
Book Discussion – Sophie’s Choice
The plot ultimately centers around a tragic decision which Sophie was forced to make upon entering the concentration camp. Join us for a discussion on this moving book. For more information, call 504-528-1944 x 229.

Monday, August 27, 2012
5:00 pm
Tulane School of Medicine – Auditorium, 1430 Tulane Avenue
Justifying the Unthinkable: The ‘Ethics’ of Nazi Medical Experimentation by Arthur Caplan
The field of bioethics has either remained silent in the face of Nazi crimes or accepted the myths that Nazi biomedicine was inept, mad, or coerced.  The fact is that many of those who committed the crimes of the Holocaust were competent physicians and scientists who acted from strong moral convictions.  The puzzle of how it came to be that physicians and scientists who caused so much suffering and death did so in the belief that they were morally right is the focus of this presentation. For more information, call 504-528-1944 x 229.
Register for this event.

Thursday, September 13, 2012
6:30 pm
Tulane Uptown Campus – Dixon Hall
The Ethics of Using Medical Data from Nazi Experiments by Baruch Cohen
Following World War II, leading Nazi doctors were brought to justice at Nuremberg after revealing evidence of sadistic human experiments at concentration camps.  Since the Nuremberg trials, our society has had to confront the reality that the Nazi doctors were guilty of premeditated murder masqueraded as research. But what about the continued use of the Nazi doctors’ medical research? Is it ever appropriate to use data as morally repugnant as that which was extracted from victims of Nazism? Is so, under what circumstances? Civil Trial Attorney Baruch Cohen presents from a Jewish ethical perspective. For more information, call 504-528-1944 x 229.

Thursday, September 20, 2012
7:00 pm
Newcomb College – Woldenberg Art Center, Freeman Auditorium
Lecture – “The Thief of the Future: The Holocaust – Women, Reproductive Science, Eugenics and the State”
by Laurie Zoloth, Ph.D.
It was not only the lives of Jewish women that were the target of Nazi genocide, it was the very thought of a Jewish future, carried in the bodies of Jewish women.  Throughout the campaign of extermination, a second campaign was conducted to prevent reproduction; women bore the brunt of this campaign. The Nazi “experiments” carried out in the name of reproductive science were done by the most prestigious physicians in Germany, as a part of a larger vision of a future in which eugenics shaped the human future. Thus began an era in which the control of the human future was the most critical battleground of all. The 2012 Daspit Women in Science Lecture is presented by Professor Laurie Zoloth, Director of The Brady Program in Ethics and Public Life at Northwestern University. For more information, call 504-865-5422 or email cheaney@tulane.edu.

Wednesday, October 10, 2012
12:00 pm – 1:00 pm
The National WWII Museum – Orientation Center
Lagniappe Lecture – Unit 731 by Walt Burgoyne
In August of 1945, the Soviet Union invaded Japanese Manchukuo. At Japanese compound Unit 731, thousands of rats were released from their cages. They carried millions of bubonic plague-infested fleas to the nearby cities of Harbin and Pingfan. The humans intentionally exposed to plague in camp had already been slaughtered by the Japanese; and the compound burned, to erase damning evidence. Learn about little-known Unit 731, and the unbelievable atrocities committed there, from Education Programs Coordinator Walt Burgoyne. For more information, call 504-528-1944 x 229.

Note that some events will be held at off-site locations. Programs subject to change.

END_OF_DOCUMENT_TOKEN_TO_BE_REPLACED 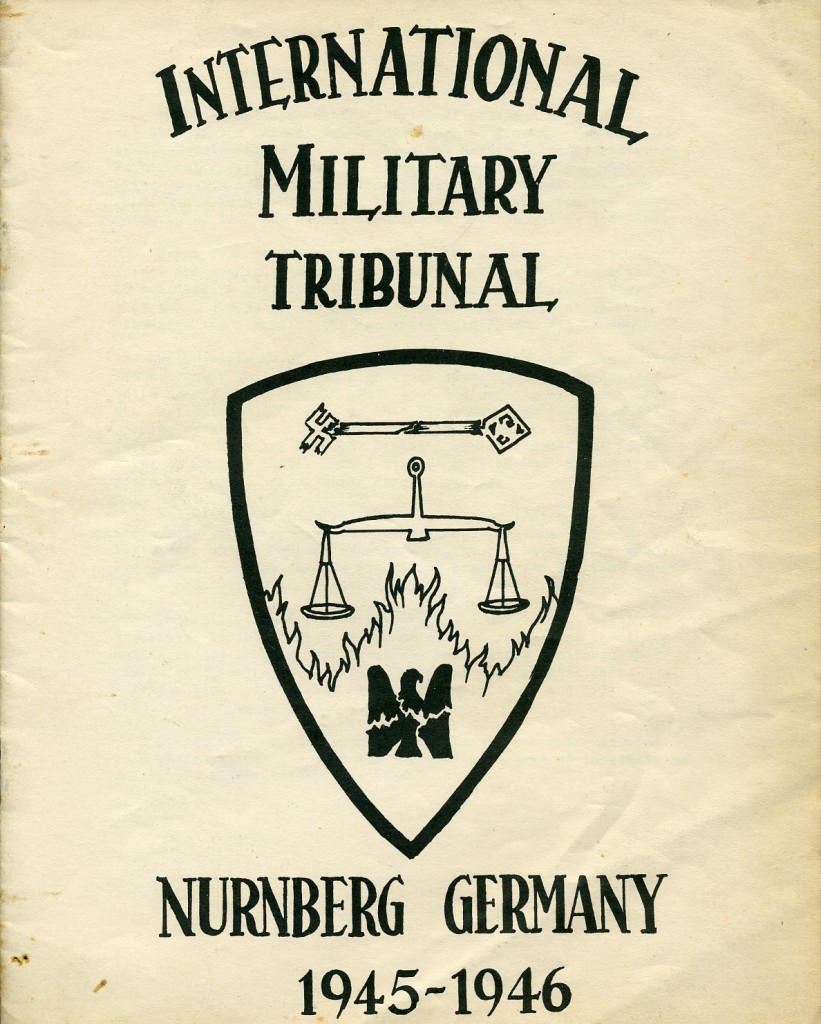 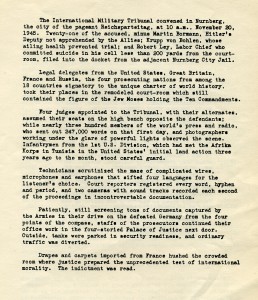 Justice Given for Victims of Nazi War Crimes

The Nuremberg Trials began in November 1945 and went on for nearly a year. A program of sorts from the Museum’s collection describes in detail the proceedings at the trial and even includes a scale map of the courtroom’s layout. Representing the United States, the French Republic, the United Kingdom, and the USSR were four chief officials prosecuting some of the most infamous German leaders including Hermann Göring, Rudolf Hess, Hans Frank, Joachim von Ribbentrop, and Wilhelm Frick.

Göring, Hess, von Ribbentrop, and Keitel under guard during the trial. Courtesy of the National Archives. 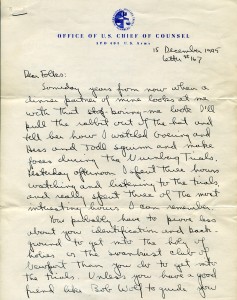 A letter written by Pvt. Herman Obermayer who traveled to Nuremberg (then known as Nurnberg) to witness the historic events describes the extent of the strict security throughout the city during the trials:

“Dear Folks, Someday years from now when a dinner partner of mine looks at me with that stop-boring-me look I’ll pull the rabbit out of the hat and tell her how I watched Goering and Hess and Jodl squirm and make faces during the Nurnberg Trials. Yesterday afternoon I spent three hours watching and listening to the trials, and really spent three of the most interesting hours I can remember.

You probably have to prove less about your identification and background to get into the Holy of Holies or the swankiest club of Newport than you do to get into the trials. Unless you have a friend like Bob Wolf to guide you through and around the security system the ordinary human being who wanted to see the trials would leave Nurnberg more frustrated than a Midwest businessman in Washington. The area for a block or two around the Palace of Justice is restricted which means that no civilian or soldier without proper identification can enter the area. There are guards at the gate to the Palace of Justice grounds and unless you have a pass stating your exact business you go on to a security office where you are checked and interrogated, etc…You cannot wear an overcoat or hat into the courtroom or even carry it with you as they are afraid you might be able to conceal a grenade, weapon, etc. “

This entry by The National WWII Museum Curator Meg Roussel