Ed Tech and NHD: Producing the Next Ken Burns?

Taming Warfare: The History of the Geneva Conventions produced by John Dean, Matthew Kaufman, and Sean Warner of St. Theodore Guerin High School in Noblesville, IN.

The documentary category for National History Day is growing in popularity as software such as Apple’s iMovie and Windows Movie Maker becomes commonplace on computers at home and school.  In June, I served as a judge in the Junior Group Documentary category at the National History Day Contest and was amazed at the quality of work turned in by middle school students.  The overall winner in the category, an excellent analysis of the Candy Bombers from the Berlin Airlift put together by two young ladies from Kansas, came from the preliminary round that I judged.  Under the guidance of their teacher, the students did their own research, compiled images and video, and did all of the narration themselves.

The documentary category for NHD began in 1982 as “media presentation.”  The name was later changed to documentary.  The category has attracted quite a few fans, including Ken Burns, creator of epic documentaries Baseball, The War, and the newly released Prohibition.  Burns said recently, “The skills that students take from history education and the NHD program are ones they will carry with them throughout their lives.”  Burns is an honorary member of the National History Day cabinet and has appeared at the National Contest several times.

NHD documentaries are a great use of educational technology.  Documentaries are one of several options that students have when entering an NHD competition, meaning that students are making a conscious choice to use media to display their research.  Students who are unsatisfied with table top exhibits or who are quick to learn the newest features of their computers tend to gravitate to this category.  A benefit to their choice is the creation of a product that has lasting appeal and sparks the interest of others. 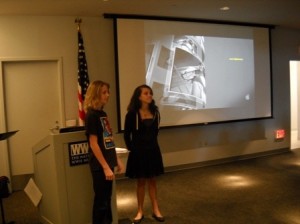 NHD’s young filmmakers have been invited to libraries, community centers, and historical centers to screen their work and answer questions.  These are moments that students will not forget.  Students who enter the State Contest in Louisiana are able to have their documentary shown in The National WWII Museum’s Orientation Center to an audience of judges, fellow students, and the general public.  For young, skilled filmmakers, this may be the stepping stone to a future career.