October 14 marks the 121st anniversary birthday of former President and General of the Army Dwight D. Eisenhower.  “Ike” was arguably the indispensable figure on the American scene during the tumultuous mid-century years of 1940-1960.  He rose to world fame as the Supreme Commander of the Allied Expeditionary Forces during the Second World War, directing the “Great Crusade,” the Allied invasion of Western Europe and the military downfall of Hitlerite Germany.  Amongst his fellow Americans, his reputation as a public servant devoted to the good of his country was so admired that both major political parties sought him as their presidential nominee in 1948.  Playing the role of Cincinnatus, Eisenhower initially demurred, but when the war in Korea bogged down Eisenhower emerged to run for the presidency as a Republican in 1952.  In his presidential service he ended the war in Korea, then focused upon providing his nation and the world with years of peace and economic prosperity.  After forty previous years dominated by world wars and economic depression, it has been argued by historians that the true measure of Ike’s greatness in his presidency was his avoidance of political pitfalls that might have replayed these historical disasters.

Part of Eisenhower’s success in waging war and and maintaining peace as a statesman lies in the environment of his birth and upbringing as a young man in middle America.  He was born near the railroad tracks in a rented house in Denison, Texas on October 14, 1890, the third son of David and Ida Eisenhower.  The Eisenhowers were descended from Pennsylvania Dutch Mennonites, and were pacifists in their political convictions.  The following year, David Eisenhower got a job as a mechanic in a creamery and the family moved to Abilene, Kansas, the small town (population 4,000) which would be home to Dwight Eisenhower for the next twenty formative years.  At 201 South East Fourth Street, David and Ida raised six strong sons in a two-story white frame house shaded by trees across three flat acres.  There was a smokehouse and a barn that occupied a horse, cows, chickens, pigs, rabbits and ducks.  Milk, eggs, and meat were supplemented along with a large vegetable garden and orchard containing apples, pears and cherries.  The boys were expected to tend chores on all of these, and the household was self-sufficient from the grocery store. 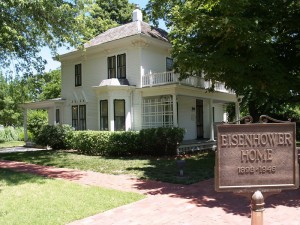 The parents emphasized the personal values of self-sufficiency, hard work, honesty, integrity, and ambition which the community reinforced.  Religion was an integral part of the family’s life, with daily prayers and Bible readings before each meal.  In a competitive atmosphere, the six boys would try to perfect reading aloud from the Bible in the evenings.  While the parents lived in a chaste manner in their own personal lives, they did not forbid or resent the personal habits which their sons picked up as adults, including indulgences such as smoking, swearing, gambling and card playing, and alcohol.  Because his father had attempted to force him into a life of farming, David did not attempt to impose any specific careers upon his sons.  The boys were encouraged to see and seize the opportunities around them in life, and encouraged to better themselves in careers far beyond the limits of Abilene. 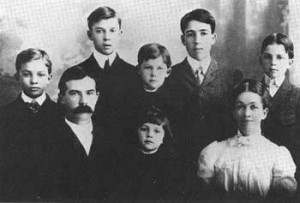 There were limits to the culture of Abilene and within the Eisenhower family.  The population was overwhelmingly familiar and conventional to each other– of European heritage, Christian faith, industrious and hard-working.  The rhythms of the natural world and harvesting wheat crops reinforced the importance of knowledge concerning the weather, animal and insect life, and the farm economy.  The atmosphere accepted the world largely as it was, and did not seek to question life or engage a deeper intellectual curiosity.  The family was to produce six remarkable sons who all succeeded in varying career paths, but did not produce free-thinkers such as artists, writers or painters.  The emphasis was on making better that which already was.  Dwight himself would prove to be a manager of exceedingly great capacities, but his mindset was not that of a military innovator or political thinker.

But the large natural landscape also provided for a healthy outdoor life, filled with physical activity and robust spirit.  Little Ike, as he was known (his older brother Edgar was known as Big Ike) became proficient in exploring landscapes, and then living off the landscape through passionate hunting, fishing, and cooking.  Beginning in Abilene and for the rest of his life, he loved pressing into new wooded lands and waterways, hunting for birds or fishing for trout, and then heartily cooking his catch upon an open campfire for his companions.  It was in organizing hunting and camping trips amongst his friends that the teenage Eisenhower first showed the leadership and organizational skills which would mark him as a commander; he gathered the money and the boys together, arranged for transportation to the destinations, bought food and cooked at the campsites. 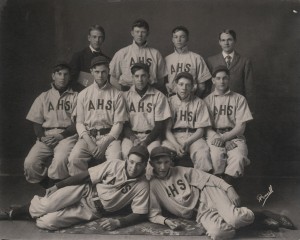 This could also be seen by Eisenhower’s efforts in his schoolwork.  He was most dedicated to athletics, in particular baseball and football, and passionately threw himself into these efforts.  He was not a great athlete, but he was tenacious and loved self-improvement in his game.  By high school he was a solid student, and preferred subjects such as mathematics and English composition.  But the subject which engaged him the most was the study of military history.  This passion had inflamed when he was a boy, and he read about ancient conflicts, fascinated with the particular details of battles.  Hannibal was his first hero, and later George Washington.  In high school he expanded his interests into more modern American and European military history, including some of the political history surrounding the military events.  Although his senior yearbook in 1909 predicted that he would eventually become a professor of history at Yale, however, his readings had not initiated consideration of a military career in the young Eisenhower when he graduated.

After high school graduation, Dwight and his brother Edgar agreed that in order for Edgar to attend the University of Michigan to study law, Dwight would initially stay behind in Abilene, working and saving money for Edgar’s expenses, and then Edgar would return the favor and send Dwight to college.  Eisenhower stayed in Abilene working at the creamery with his father.  But through a newly expanded friendship, his fortunes turned.  “Swede” Hazlett was an Abilene boy who had been sent to military school in Wisconsin by his father; after returning to Abilene to study for the mathematics portion of the U.S. Naval Academy entrance exams, Hazlett and Eisenhower struck up a friendship in which Hazlett encouraged Dwight to seek appointment to one of the service academies, as both provided for athletics and were free.  Dwight Eisenhower took competitive entrance exams in September 1910; amongst eight applicants, he placed second.  The first place finisher indicated that he would only accept the Naval Academy appointment, and so appointment to West Point was offered to Eisenhower.  While his mother did not like the idea that her son was destined to be a soldier, she did not try to persuade him or prevent him from that course. 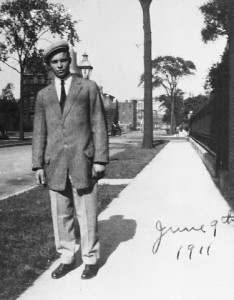 Dwight Eisenhower in Chicago on his way to West Point, June 9, 1911

When Dwight Eisenhower left Abilene in June 1911, he was a powerfully built young man not just physically, but in his intellectual and spiritual beings.  He was unusually self-confident and competent, but careful not to allow his ego to swell beyond his inner fortifications.  He was not a man in search of himself, but a young man who was confident in who he was, hungry in his search to improve himself and his abilities, and secure in his abilities to meet and master future challenges, expanding himself to his fulfillment as a man and a leader.  He was both a most extraordinary young American, and at the same time a most typical one.

“The proudest thing that I can claim is that I am from Abilene,” Ike commented much later in life.  When he left Abilene, his life began the long outer journey towards world fame, acclaim, and achievement that we know him by today.  But Abilene had furnaced and polished the inward man who would have the strength and judgment to accomplish great things through the greatest adversities, still unglimpsed in the world’s history in 1911.  Eisenhower himself loved and credited this ordinary American world which had fathered him.  “These same conditions were responsible for the existence of a society which, more nearly than any other I have encountered, eliminated prejudices based upon wealth, race or creed, and maintained a standard of values that placed a premium upon integrity, decency, and consideration for others.   Any youngster who has the opportunity to spend his early youth in an enlightened rural area has been favored by fortune,” Ike wrote in a 1947 letter considering his origins. 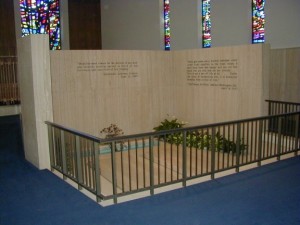 Eisenhower visited Abilene for the rest of this life, but he never resettled there until it was time to make a last journey home– his final journey to rest.  His upbringing in small-town Abilene was the key to Eisenhower the warrior, leader and statesman of war because it was a fount of life and peace.  His extraordinary sense of peace, security, democratic heritage and eternal values in a natural world were instilled in the young man, and were the foundation stones of the great war leader and executive who would seek to guide a ruined and devastated world to a more just, peaceful condition afterward.  Happy Birthday, Ike!

Ed Tech and NHD: Producing the Next Ken Burns? Joseph Stalin: “Moscow will be defended to the last!” 70th Anniversary October 19, 1941