70th Anniversary – Women Get “A League of Their Own” 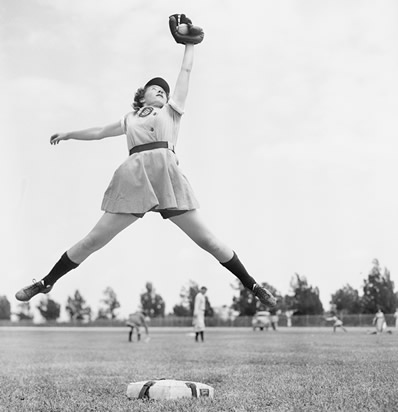 On May 30, 1943, the All-American Girls Professional Baseball League (AAGPBL) made its debut, with the South Bend Blue Sox (Indiana) beating the Rockford Peaches (Illinois), 1-0 and the Kenosha Shamrocks (Wisconsin) beating the Racine Belles (Wisconsin), 8-6.

Women have been playing professional baseball since the 1940s, yet it wasn’t really a well know fact until the 1992 Penny Marshall movie, A League of Their Own, starring Tom Hanks, that put these women in the public eye.

In 1943, The United States was in full force fighting in World War II.  P.K. Wrigley received word from President Franklin Delano Roosevelt that the 1943 Major League baseball season might be suspended due to manpower shortage. He wanted Wrigley to do something to keep the baseball game going until the men got home from service.

In the midst of removing barriers for women to be able to work in the industry to help the war effort, Wrigley joined forces with Branch Rickey and several small town entrepreneurs to create the first professional baseball league for women. A new game was born.  Using rules from the men’s game the game became a faster action game than softball.  In 1943, when the league began, the girls were actually playing fast-pitch softball using an underhand pitching delivery, but with certain variations to make the game faster. Runners were allowed to lead off and steal, and the size of the diamond was larger than the field used in softball but smaller than a baseball diamond.

The women of the league were expected to act like ladies and had to abide to the rules of conduct and had to attend charm school to continue to act as a proper lady.  Wrigley and his advertising agent promoted the new “Girls Baseball” as wholesome family entertainment for war workers.

Thirty scouts were hired to start looking for outstanding softball players all over the United States and Canada.  Four teams were formed and the league started its first season in 1943. In 1944, the All American Girls Professional Baseball League expanded to six teams. By 1946 eight teams were playing 110 games per season.

The schedule of 110-120 games per season consisted of playing single games six days a week plus double headers on Sundays. The only time off were rained out games and then they were made up by doubleheaders next time around. Traveling was done by bus between the different cities leaving right after the game and sometimes arriving just in time to play the next game in the new city.

The league lasted from 1943 – 1954.  In 1948, the league drew a record 910,000 fans for the 10 team league.  The All American Girls Professional Baseball League memorabilia was enshrined in the Cooperstown, New York Hall of Fame on November 5, 1988. Over 550 names are on a plaque in the exhibit named Women in Baseball. 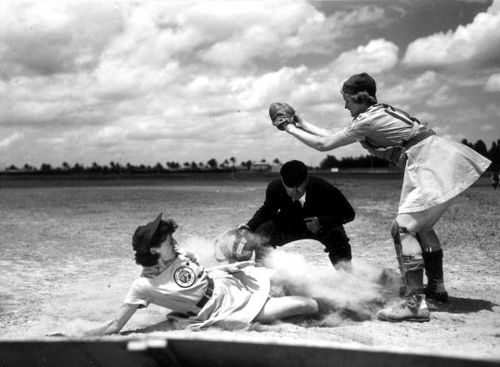