Of the eleven Fedele brothers from Rochester, New York, eight would serve in the US armed forces during World War II, and one would serve in Korea. Ranging in age in 1945 from to 19 to 37, all returned home safely after serving in nearly every branch of the armed forces, from Africa to Europe to Asia. Their mother, Angelina, passed away years before the conflict began, leaving their father Philip to raise their eleven sons and three daughters. As was typical in post-depression American, the children took on great responsibility. The daughters helped raise their brothers, while the brothers went off to work at young ages. Not having eight of them around was a huge blow to the family both emotionally and financially, but was a sacrifice they were all happy to make for their country. A few of the brothers happened to run into each other during the war, one pair on Iwo Jima and another pair in Africa. Remarkably, all would return home alive and well, though one suffered an injury on Okinawa. 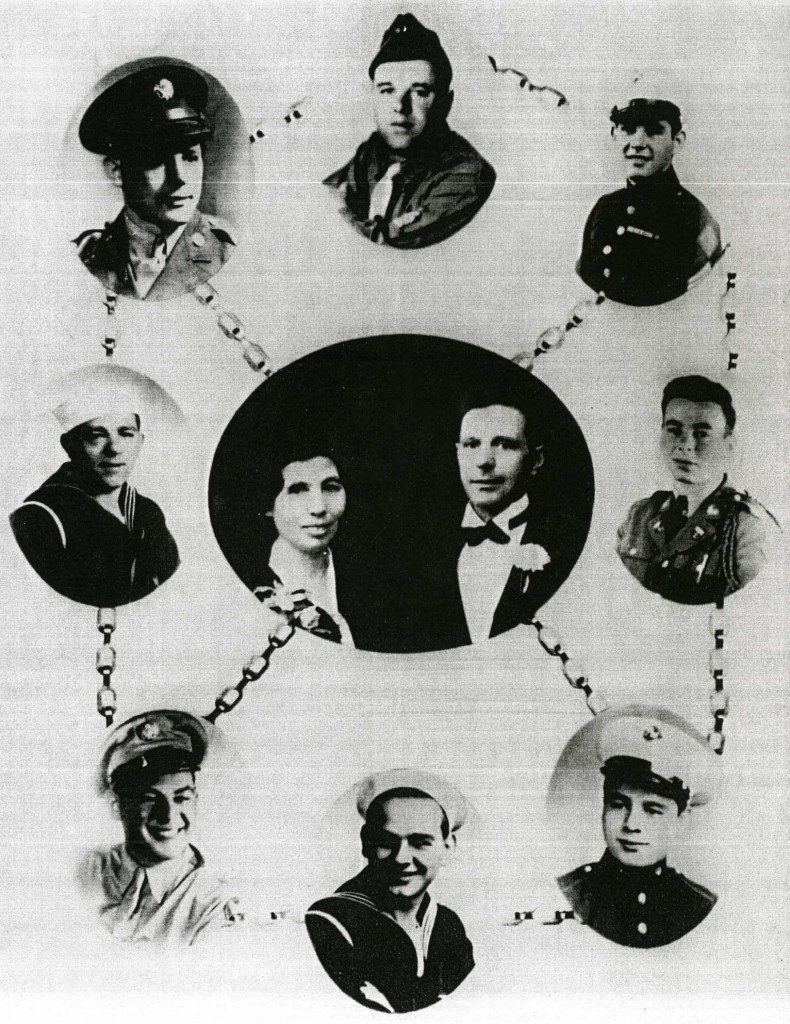 Anthony R. Fedele (Marine Corps, b. 1920)—Cpl. Anthony Fedele served as an anti-aircraft machine gunner. He was a witness to the attack on Pearl Harbor in December 1941, and took part in the battles for Tulagi, Guadalcanal, and Midway.

Generino A. Fedele (Marine Corps, b. 1925)—Aircraft Mechanic Pfc. Generino Fedele participated in the Philippines Island Campaign (1944-45), as well as in the capture and occupation of Peleliu.

Frank A. Fedele (Army, b. 1912)—T/4 Frank Fedele served as a cook in the Southern Philippines with the 87th Chemical Mortar Battalion.

Patrick J. Fedele (Army, b. 1923)—Pvt. Patrick Fedele served for 28 months. Due to an injury stemming from a plane crash during training, Patrick was never sent overseas.

Vincent L. Fedele (Army Air Corps, b. 1919)—Sgt. Vincent Fedele served with the Headquarters Detachment of the 81st Fighter Group which flew P-39’s in the Mediterranean Theater, playing a role in the Anzio landings, as well as in India and China.

Joseph P. Fedele (Navy, b. 1908)—S 1/c Joseph Fedele served with the 14th Naval Construction Battalion, better known as the Seabees, for two years. Joseph was the only brother to be wounded, hit by machine gun fire on Okinawa in 1945 for which he was awarded the Purple Heart.

Salvatore L. Fedele (Navy, b. 1926)—S 2/c Salvatore Fedele served in the Navy from August 1944 to June 1946, and took part in the Liberation and Occupation of the Philippines.

A ninth Fedele brother, Victor, would go on to serve in the Korean War shortly after World War II (along with two of his WWII veteran brothers). The remaining two brothers, William and Michael, were exempt from the draft because they had essential jobs at defense plants.

7 Responses to “Fedele Brothers vs. Fascism”

What a great family. All those brothers went to war. Thank God, they all made it back. I know the Bianchi brothers. Their mother was a Fedele. They are outstanding patriots like there uncles.

They are my grate uncle’s we love and miss them all.

Very proud of them!

Always respected; admired and loved by our family my great uncles were true patriots. They are all gone now and greatly missed and will continue to be in our hearts always.

What a great family,and what a brave and patriotic family of brothers. I’m sure their families are all very proud of them, and this country should be very proud of them. You don’t find a family of brothers like them today. Brothers like them are the reason we are speaking English today. A Marine friend of Angelo Bianchi, their nephew.
Semper-Fi Bob Munsey

Am so damn proud of my father and Uncles who fought and became a true Patriots.. a close knit
family that I dearly miss them all.. Here’s my Valentine thanks for having you in my life..
Thanks Angelo Bianchi for your hard work setting this beautiful memorial display at the museum!!
XO Marilyn Fedele-Sundberg (Vincent’s daughter)