In the Second World War, the year 1943 represents a hinge or mid-point in the historical course of the war. We today know that the American entry into the war in late 1941 ultimately culminated in victory in 1945, and many students of history today therefore believe that the United States was gaining traction towards this inevitable, foreordained end. But those Americans living through 1943 had no way to know that the war would end in two years, or that the final result would be victory. In reality, 1943 was a time of tremendous and complex transition in the Allied war effort, one in which momentum was being fostered that would lead to the offensive cascade and escalating violence which would overwhelm the Axis powers.

When I first became interested in the Second World War as a high school student, the year 1943 seemed to be a lull or drag in time, a year which paled in importance compared to the crash of huge events that surrounded it. To my youthful, untamed mind, the great dramatic events of Pearl Harbor, Guadalcanal, North Africa or Stalingrad in 1942 swept seamlessly and effortlessly into the great dramatic events of Normandy, the Bulge and final victory in the drive to Berlin and the atomic explosions over Japan in the breathtaking time of 1944-45. By comparison, 1943 seemed to be a grind, a breathing spell, a time when leaders were simply “staying the course” until they could undertake the next big, dramatic historical steps.

Fortunately for me, students of history are asked to consider how big, dramatic events in reality come about, and the interested student who digs into the details of an historical time frequently discovers that what first seemed to be mundane or simple events are in fact the result of an enormously complex set of circumstances, initiatives, and personalities. Such has been my experience as I continued to learn about World War II in college, and it is my good fortune to continue to learn new perspectives right up to the present day.

Just in time for the 70th anniversaries of the events of 1943, the Yale historian of geopolitics Paul Kennedy has laid out the case for 1943 as the key time of complex and deep transitions within the war with his latest book, Engineers of Victory:  The Problem Solvers Who Turned the Tide in the Second World War. Professor Kennedy identifies the strategic issues upon which victory for the Allies hung in the balance:  learning how to bring convoys across the Atlantic Ocean safely, how to achieve air superiority, how to halt a blitzkrieg, how to successfully conduct amphibious landings and how to defeat vast geographic distances through logistics.  The origins to the big, dramatic events that brought the war to a tremendous climax were due to the Allied responses to these strategic problems, all roughly centered in the year 1943.

The fate of the outcome of the war alights on the movement of events centered on this hinge year of 1943. In this perspective, the battle of the Atlantic comes to a head during the critical month of Black May. The Allies learn after disastrous bombing raids at Ploesti and Schweinfurt that technology can supply the key to long range fighter escorts and reverse the currents in the air war. The techniques first used at El Alamein by the British are demonstrated on a massive scale against the Wehrmacht’s blitzkrieg tactics by the Red Army at Kursk. Through the Mediterranean and Pacific, the Allies honed the tremendous demands of coordination between air, sea and land forces necessary for effective amphibious landings against hostile shores. And the far-flung expanses of the Pacific which protected the Japanese homeland became bridgeable by American forces, with the taking of Saipan in the Marianas opening up a devastating American air campaign. 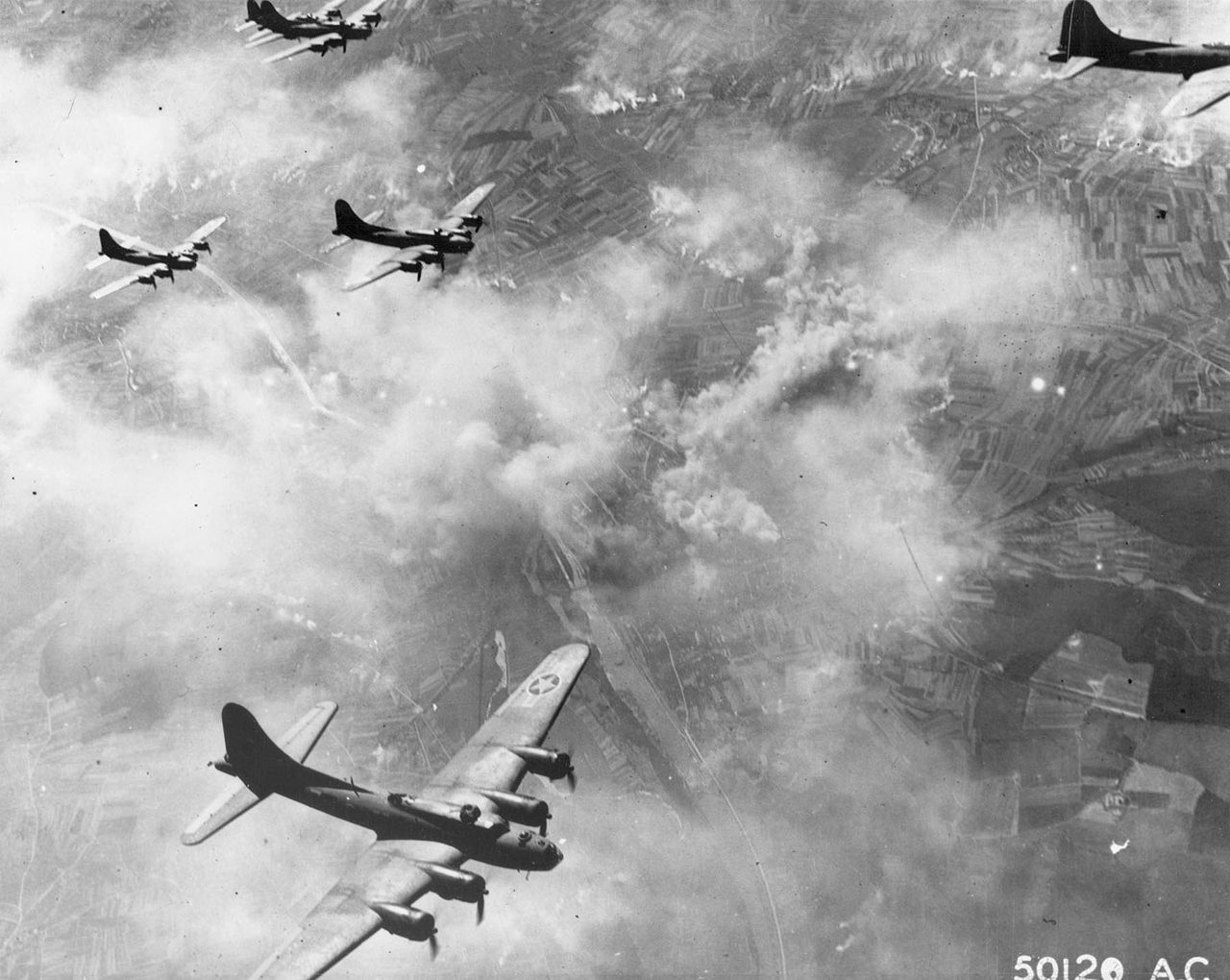 What is most interesting for students of history to consider in the great strategic events of this time is the mosaic of seemingly simple, individual decisions and causes underlying the turn of events. A change of doctrine such as the counter-intuitive, aggressive movement of ships towards German U-boats after an attack at sea, a technological innovation such as the installation of a Rolls-Royce engine inside a P-51 aircraft or the entrepreneurial determination of a small businessman such as Andrew Higgins all played a role in determining the outcome of the events of 1943, and thus the eventual Allied victory in the war. These examples are not singular explanations, but fit into a larger historical picture with still more multiples of causes and ideas which contributed to why history turned out as it did.

So to further contemplate, discuss and determine why 1943 matters in the Second World War, The National WWII Museum will host as the subject of our annual International Conference on WWII “1943:  Victory in the Balance” from November 21-23, 2013, here in New Orleans. I invite all students of history, young and old, to attend as we seek friendly arguments and stimulating answers within this fascinating hinge year of the war.

Dr. Keith Huxen is the Samuel Zemurray Stone Senior Director of Research and History at The National WWII Museum.

The National WWII Museum’s annual International Conference on WWII is just around the corner. Conference hotel rooms are nearly gone and the All-Access passes are selling fast. Anyone who has ever attended the Museum’s Conference can attest that this is an experience not to be missed. But just in case you might still be on the fence. We’d like to introduce you to some of our esteemed speakers in a series of upcoming blog posts. Today’s featured speaker is Col. Roger Cirillo. 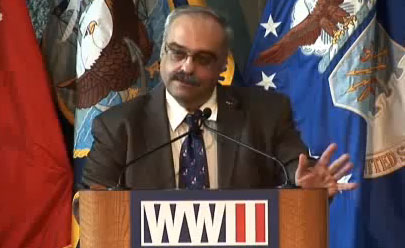 Roger Cirillo served in the US Army from 1971 – 1995, retiring with the rank of Lt. Col. He served in armored cavalry units in the United States, Korea and West Germany, and on the staff and faculty of the Air Defense and Armor Schools. We was a War Plans Officer at Central Army Group NATO and served in the office of the CINC, USAREUR. He taught military history at US Army Command and General Staff College and holds a Ph.D. in military history from Cranfield University at the Royal Military College of Science, Shrivenham, UK.

He is the author of the Ardennes-Alsace Campaign and other publications and aided in the publication of more than 30 military history books for the Association of the US Army. He is the editor of the “American Warrior” series and “Battles and Campaigns” series for the University Press of Kentucky.

He is a regular presenter at The National WWII Museum. View his April 14, 2011. Mason Lecture, Agony, Misery and Heartbreak: The Ground War in Italy, January – June 1944, where he describes the particularly challenging mountain warfare fought in Italy in World War II.

The National WWII Museum’s annual International Conference on WWII is just around the corner. Conference hotel rooms are nearly gone and the All-Access passes are selling fast. Anyone who has ever attended the Museum’s Conference can attest that this is an experience not to be missed. But just in case you might still be on the fence. We’d like to introduce you to some of our esteemed speakers in a series of upcoming blog posts. Today’s featured speakers are Dr. Donald L. Miller and Dr. Allan Millet.

Donald L. Miller is the John Henry MacCracken Professor of History at Lafayette College. He has appeared in numerous PBS and the History Channel programs, including A Biography of America on PBS. He is the author of eight books, including the prize-winning City of the Century: The Epic of Chicago and The Making of America, The Story of World War II and D-Days in the Pacific. Miller’s book Masters of the Air: America’s Bomber Boys Who Fought the Air War Against Nazi Germany was recently selected to serve as the primary source for HBO’s newest World War II miniseries. He currently sits on the Museum’s “Presidential Counselors” advisory board. 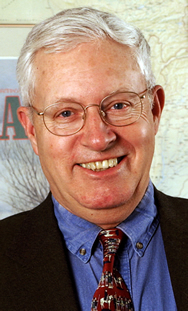 Col. Allan R. Millett, USMCR (Ret.), is the director of the University of New Orleans Eisenhower Center for American Studies and the Ambrose professor of American history. His books include Their War for Korea: American, Asian, and European Combatants and Civilians, 1945—1953 (Brassey’s, Inc., 2002). The recipient of the 2008 Military Library Literature Award for Lifetime Achievement, Colonel Millett lives in New Orleans.

Miller and Millett presented “Guadalcanal: The First Offensive” with James Hornfischer at the 2011 International Conference on WWII.

The National WWII Museum’s annual International Conference on WWII is just around the corner. Conference hotel rooms are nearly gone and the All-Access passes are selling fast. Anyone who has ever attended the Museum’s Conference can attest that this is an experience not to be missed. But just in case you might still be on the fence. We’d like to introduce you to some of our esteemed speakers in a series of upcoming blog posts. Today’s featured speaker is multiple Pulitzer Prize winner and bestselling author, Rick Atkinson.

Rick Atkinson is the bestselling author of An Army at Dawn (winner of the Pulitzer Prize for history), The Day of Battle, The Guns at Last Light, The Long Gray Line, In the Company of Soldiers and Crusade. Other awards include a Pulitzer Prize for journalism, the George Polk Award and the Pritzker Military Library Literature Award. Atkinson holds a Master of Arts degree in English literature from the University of Chicago and was formerly a staff writer and senior editor at The Washington Post. He currently sits on the Museum’s “Presidential Counselors” advisory board.

Atkinson recently completed his Liberation Trilogy with the release of The Guns At Last Light. Museum supporters were treated to a special pre-release event at the Museum last spring. Rick was also kind enough to give Museum web visitors a sneak peek into topics covered in the book.

Find out more about the International Conference on WWII. 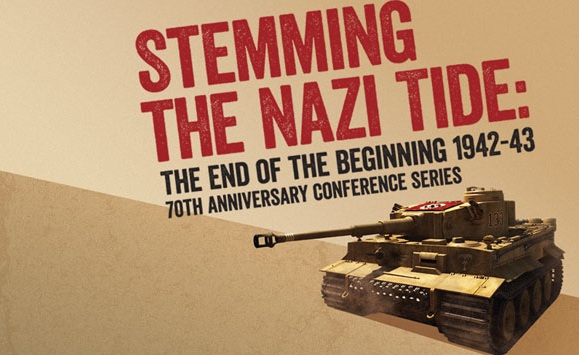 Stemming the Nazi Tide: The End of the Beginning 1942 – 1943
The 2012 International Conference on World War II

Presented by Tawani Foundation in association with the Pritzker Military Library and The Brown Foundation, Inc., of Houston, with additional support from AT&T
December 6 – 8, 2012
New Orleans, Louisiana

Save $75 on all conference packages if you register now!

Due to Hurricane Isaac, we have extended our early bird discount to this Friday, September 7th, for “Stemming the Nazi Tide: The End of the Beginning 1942 – 1943,” presented by Tawani Foundation in association with the Pritzker Military Library and The Brown Foundation, Inc., of Houston, with additional support from AT&T. The second in our six-year series commemorating the 70th Anniversary of WWII, this Conference is a must-attend event for anyone interested in the history of WWII, particularly how America and her Allies learned from their mistakes and began to roll back the Axis gains.

Visit ww2conference.com to see the current schedule, watch videos from last year’s conference and learn more about this annual event.

The Battle of Java Sea and the USS Houston

Mark your calendars to join us on December 6-8, 2012, for the next International Conference on WWII, The End of the Beginning, when we focus on the decisive events of 1942. Despite serious losses and setbacks early in the war, America and her Allies learned from their mistakes and slowly began to roll back the Axis gains. The conference title comes from a Winston Churchill address on November 10, 1942, “Now this is not the end.  It is not even the beginning of the end. But it is, perhaps, the end of the beginning.”