SciTech Tuesday: A Penny for Your Thoughts

A rare 1943 copper-coated bronze penny sold for $1 million last week.  Pennies minted in 1943 were made from zinc-coated steel.  Due to wartime demand for copper used in ammunition and military equipment, the US Mint limited its use of copper.  The rare 1943 penny is one of only 40 known examples made when copper blanks were left in the press machines by mistake.

The steel penny was minted for only one year due to problems with its composition.  It was frequently mistaken for a dime or nickel due to its size and silver luster.  Because steel is an iron alloy, the steel penny could be picked up with a magnet, causing problems in vending machines.  The edges of the steel penny would rust because they were not completely covered by zinc, a process known as galvanization.  After many complaints, mints resumed copper penny production in 1944 by using brass recovered from spent shell casings. 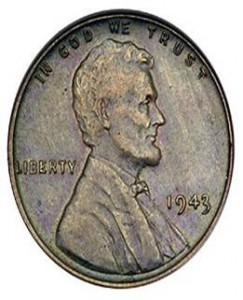 Because of their value, 1943 copper pennies are a target for counterfeiters. Fakes are often made by coating 1943 steel pennies with copper. How can you quickly distinguish a forgery? Use a magnet! 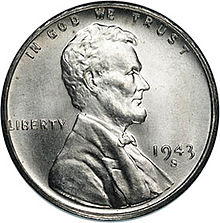 This steel penny was minted in San Francisco as noted by the “S” below 1943. Denver pennies were marked with a “D” while Philadelphia pennies carried no mintmark.