A few days ago we watched the infamous NYC ball drop in honor of welcoming 2017. Masses of people have been gathering in Times Square to celebrate the New Year since 1904, but it was not until 1907 that the first New Year’s Eve Ball descended the pole. Flash forward 35 years to December 31, 1942, and the U.S. was in a state very different from 1907. We were finishing up a full year of involvement with WWII, and still in the process of sending more troops to Europe and the vast Pacific. The celebration of New Years varied on the Home Front depending on the year and morale of people. Here’s how our fellow Americans gathered in Times Square to ring in a fresh start for the years of 1942, 1943, and 1944. 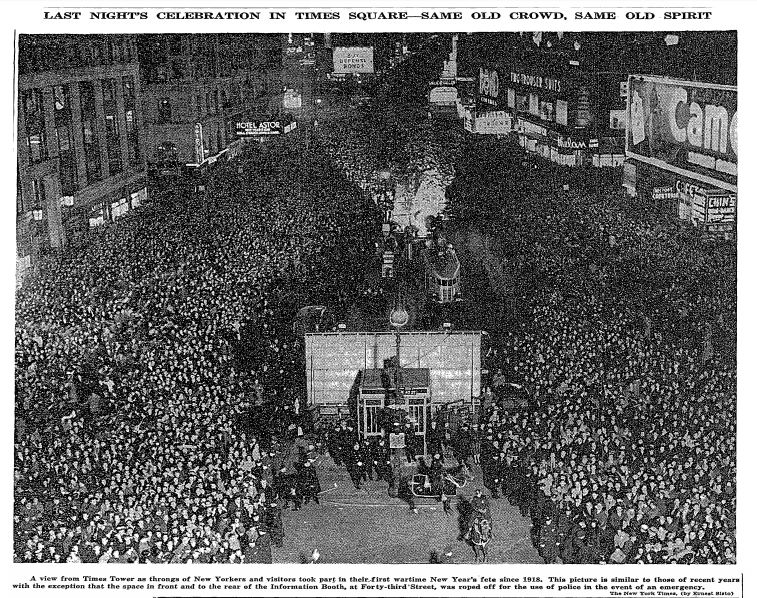 The New Year’s Eve Ball dropped, and people cheered grander and happier than ever before. Masses of people celebrated as if Pearl Harbor had not been attacked and as if the U.S. was not in a state of war. The partying in Times Square was energetic and a complete escape from the unfortunate reality that awaited so many of the men in uniform: they were headed overseas. The signs of a wartime America were evident in Times Square because of the thousands of police officers and fire trucks lined up and stood by in case of an emergency, but the spirits of the American Home Front honored 1941 and welcomed 1942 with bright lights, noise makers, and a unified singing of the Star Spangled Banner once the NYE Ball reached the end of the pole. U.S. involvement with WWII had just begun, but the Home Front already stood strong with their troops.

Write-up in the New York Times of the NYE celebration that greeted 1942. 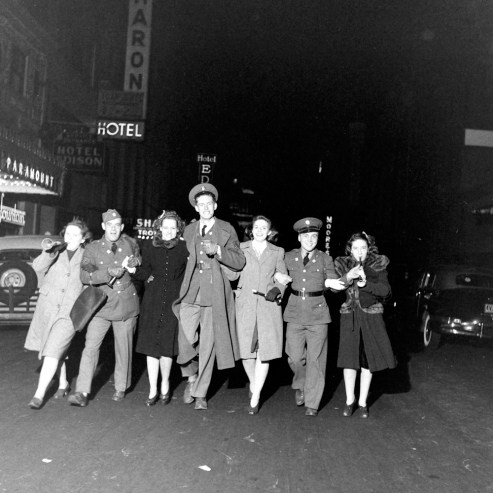 Jump ahead one year, and the times had significantly changed. The U.S. had been involved with the battles of WWII for a full year now, and the sentiment of loss and longing for loved ones was felt in the atmosphere of all who gathered in Times Square on December 31, 1942. Every year since 1907, the New Year’s Eve Ball dropped, but on the eve of 1943, there would be no Ball to descend the infamous pole that sits on top of the Times Square buildings. The efforts on the Home Front of the past year were focused on how to save and reuse. As a way to conserve energy and fuel, as well as practice for a possible, and terrifying, attack by the German Luftwaffe, black out drills were held, especially along the East Coast because not only was an air raid imaginable, but also the bright lights from cities created silhouettes of ships in the water which made them easy targets for the lurking German U-Boats. It was because of these black out drills that New Year’s Eve in Times Square 1942 neither had the Ball drop nor the infamous billboard lights because they wanted to cut back on energy costs as well as stay under the radar from the evident possibility of an attack.

New Year’s Eve on December 31, 1943 experienced a happier celebration in honor of 1944 despite wartime limitations. 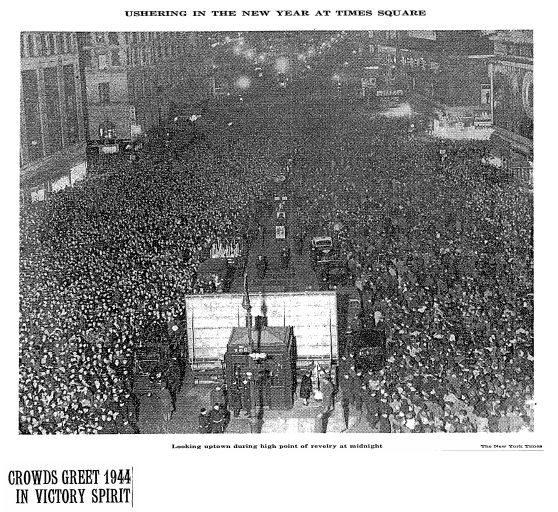 A photo of the crowds in Times Square on December 31, 1943 published in the New York Times.

A gathering to welcome 1944 then came along another year later and thousands celebrated with a more joyous spirit. People had a greater faith that the end to WWII was somewhat slowly getting closer, but they still had many tough fights ahead. Times Square was packed, and Churches filled up throughout the night and into the next day in honor of President Roosevelt’s declaration that January 1, 1944 was a day of prayer. Reflections of civilians who lived on the Home Front may not have been the happiest because of their strong desire to have family and friends back home, but at least they were a unified mass of people, working together and thankful that they were alive to put in another productive year. Although this was another year where the NYE Ball did not drop, men in uniform, women in their finest dresses, and anyone in between still gathered in New York City to celebrate with one another. The lyrics of Auld Lang Syne reminded people that it may have been long since they had seen family and friends, but that they could raise their cups or glasses in their honor and dedicate their toast to health and safety of those loved ones far away. The same rings true for today as people raise their “cups o’ kindness” in honor of those stationed around the world. In place of the Ball drop, a moment of silence was held when the clock struck twelve and chimes were played from sound trucks parked around Times Square. 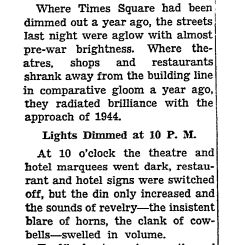 A snippet from New York Times article published on January 1, 1944.

All of these celebrations from eve of 1942 to the eve of 1944 are prime examples of the Home Front spirit during WWII. They may not have had lights or fireworks, and many probably were missing family members and close friends, but despite all of these setbacks, Americans found a way to cherish the clean slate of a new year, and continued to hope that that would be the year the war ended. During the parties and celebrations to welcome the New Year, many people had noise makers and party horns of some sort. Many of us still use these toys today to make as much noise as possible and cheer in a new 365 days. Although the day of celebration has passed, it’s always interesting, fun, sometimes successful other times a struggle, to make your own party supplies. The following instructions will teach you how to make your own party horns. The best part is you can use paper scraps to create the tube of the horn. This will get you in the spirit of scrapping, just as our friends on the Home Front. 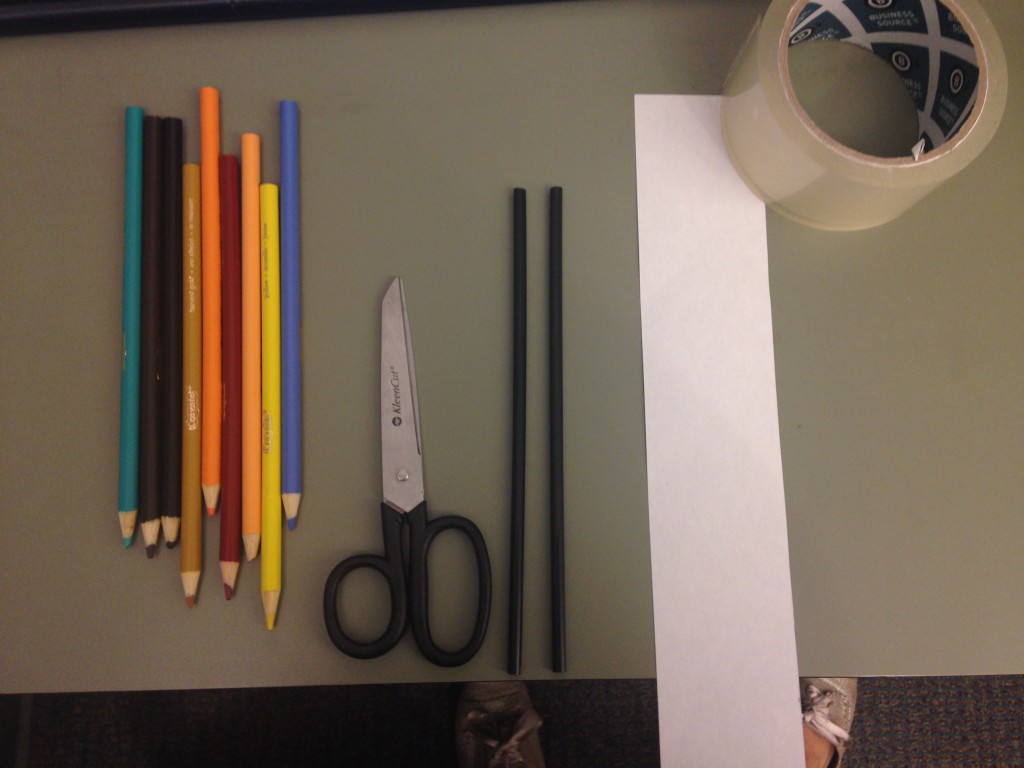 Step 1: Cut your paper into a strip that is 2×9 and then color it with a design of your choice. 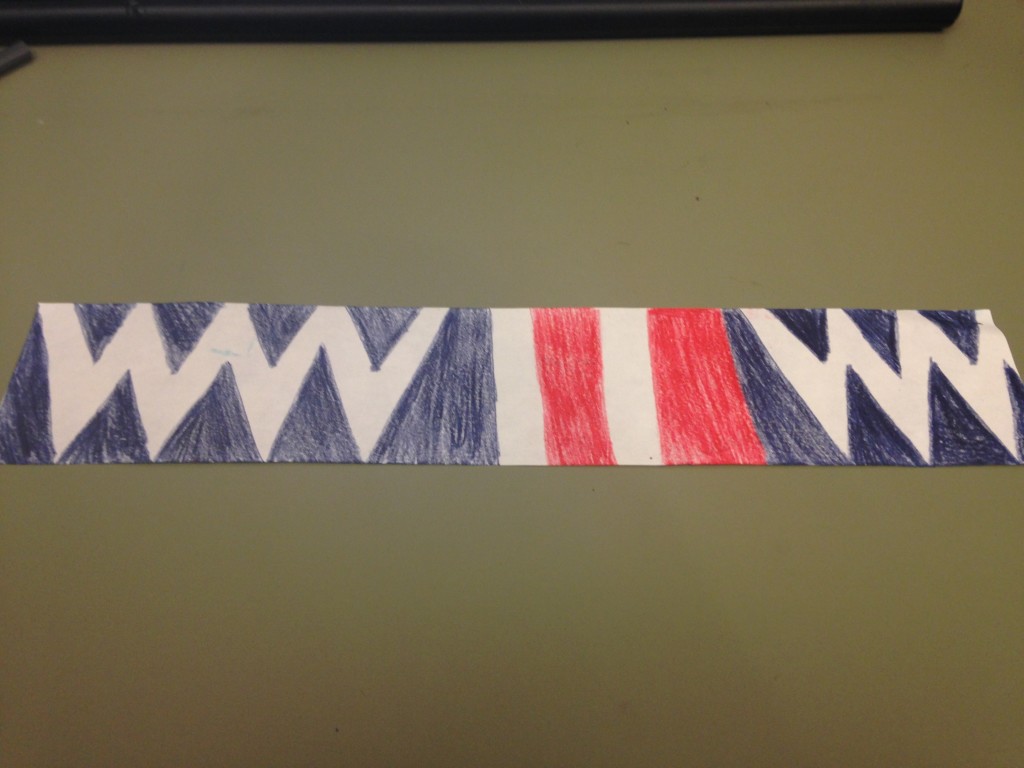 Step 2: Fold the sides of the paper so that they meet in the middle and tape the strip of paper closed. 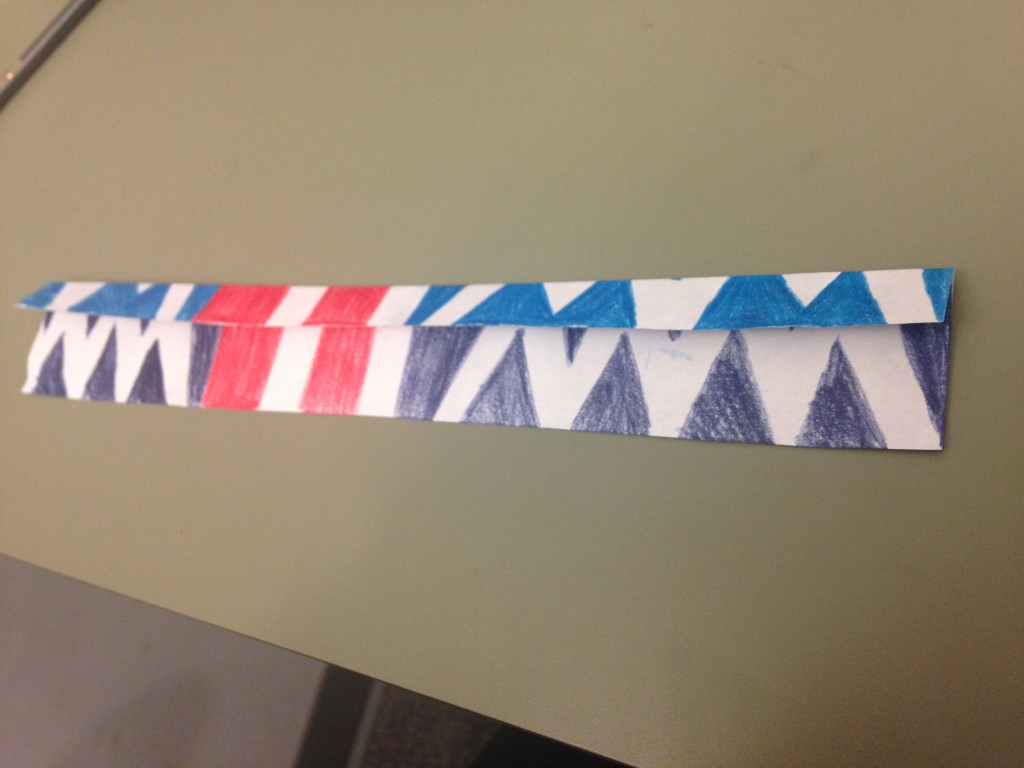 Step 3: Fold one of the ends of the tube of paper closed and tape it shut. 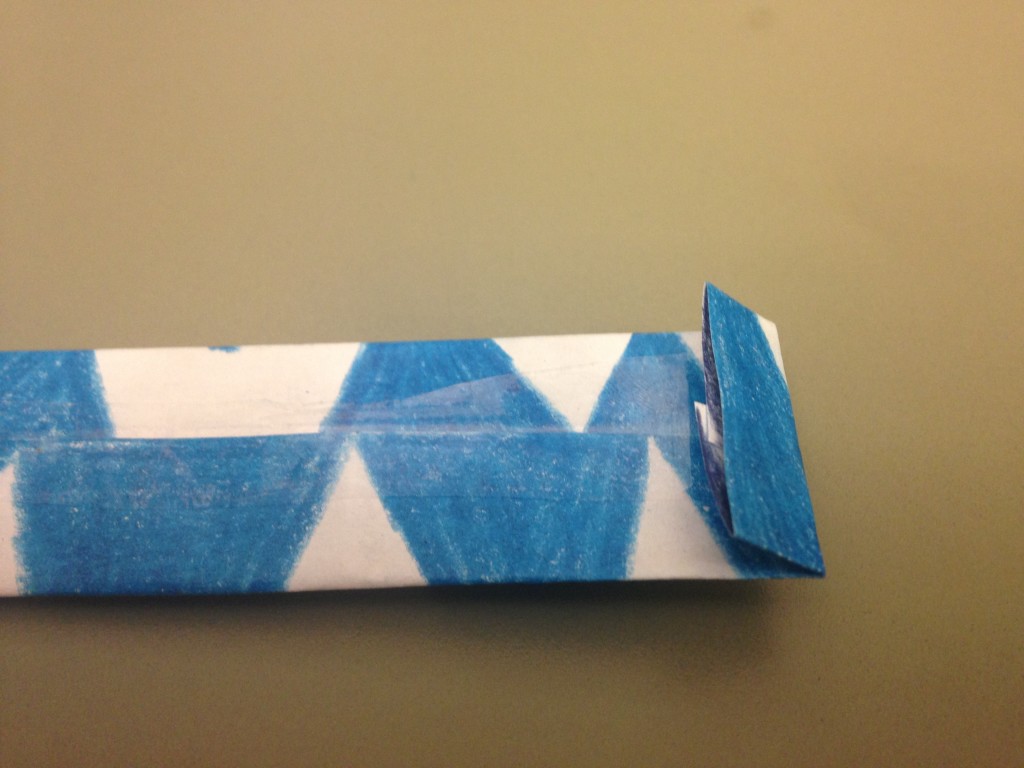 Step 4: Roll the paper from the end taped closed until it meets the other end. 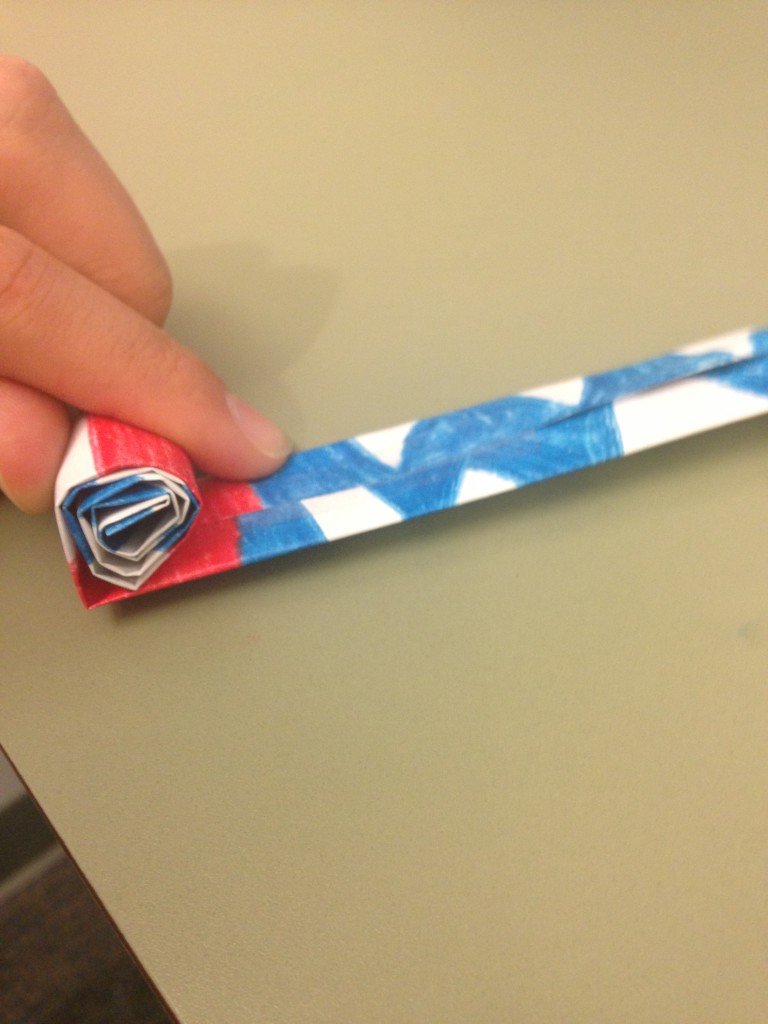 Step 5: Place a rubber band around it while you move onto preparing the straw.

Step 6: Take out your straw and place a piece of double sided tape around the end that you will put into the open end of the tube of paper.

Step 7: Insert the taped end of the straw into the tube.

Step 8: Fold sides of the tube over the straw and tape them shut so that no air can exit the tube. 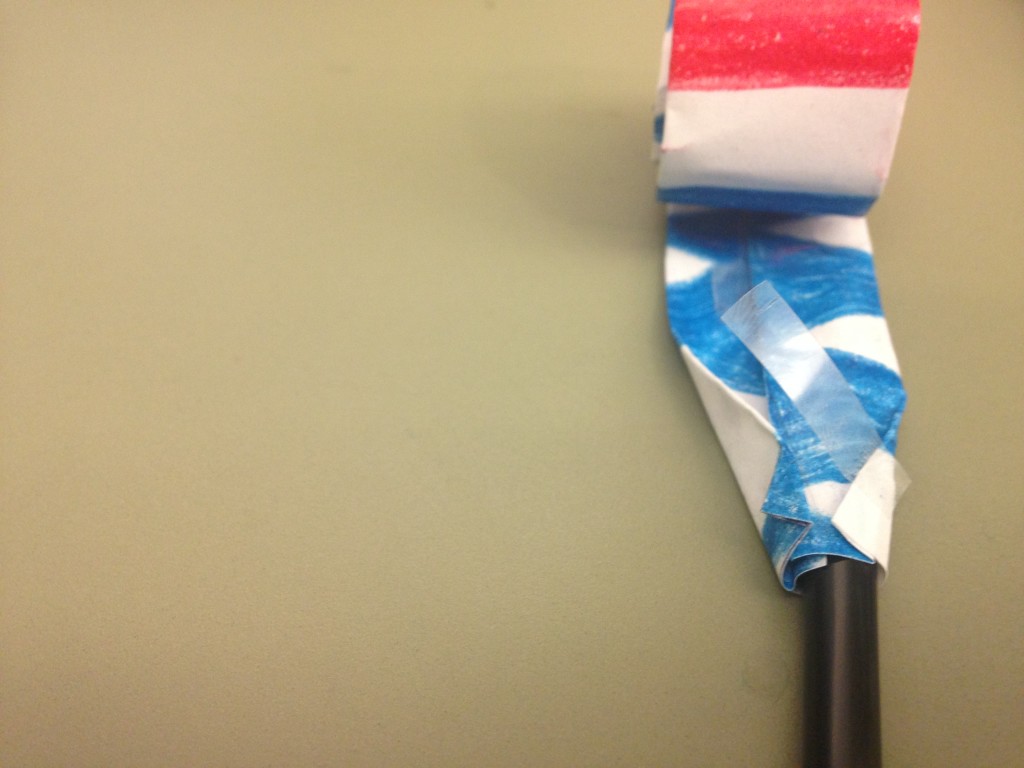 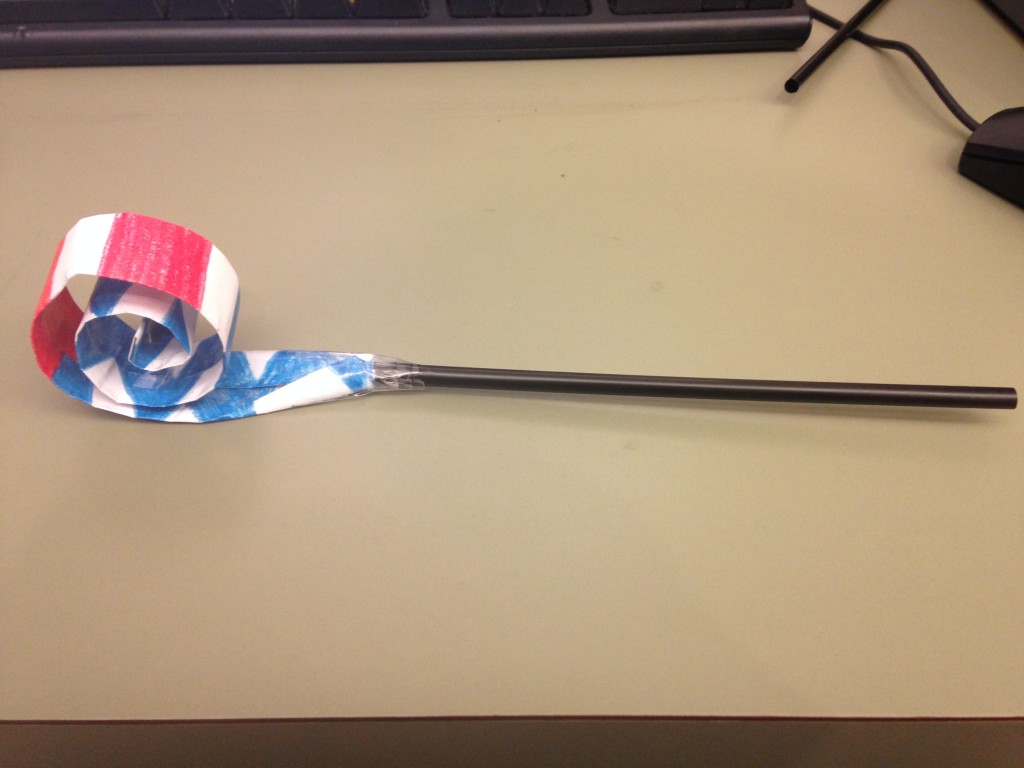