Decorated historian Dr. Alexandra Richie is a guest speaker at the Museum’s 2016 International Conference on World War II and will again lead a premium Museum tour, The Rise and Fall of Hitler’s Germany, in 2017. 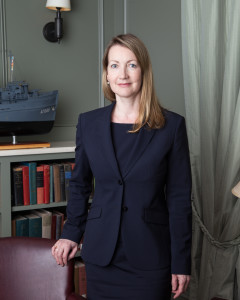 A 12-day journey through Germany and Poland tracking the ascension then destruction of the Third Reich, the tour visits Berlin, Dresden, Kraków, and Auschwitz, among other destinations.

At the International Conference, titled 1946: Year Zero—Triumph & Tragedy and focused on the postwar events that continue to shape our world today, Richie will speak during a session titled The Iron Curtain: The Descent and the Western Response with Conrad Crane, PhD, then again on a panel presentation titled World War II in Memory: Germany, Japan, and the United States Today joined by Gordon H. “Nick” Mueller, PhD, Gerhard Weinberg, PhD, and Hans van de Ven, PhD.

The entire International Conference, scheduled for November 17–19 in New Orleans, will stream live and then be archived at ww2conference.com.

Dr. Richie’s most recent work, Warsaw 1944, became the No. 1 best-selling book in Poland and won the Newsweek Teresa Torańska Prize for Best Nonfiction 2014, while her first book, Faust’s Metropolis: A History of Berlin, was named one of the 10 top books of the year by Publishers Weekly.

She lives in Warsaw with her husband and their two daughters. She divides her time between the UK, Canada, and Poland, where she is Visiting Professor of History at the Collegium Civitas, an English-speaking university in Warsaw.

Q: Can you tell us about your panel?

A: I will be on a panel with Dr. Conrad Crane, and we will be discussing the creation of the Iron Curtain which descended on Europe after World War II. Dr. Crane and I have divided the panel to show these events from different perspectives. He will be looking at this history from the American point of view; I will be discussing how the people of Eastern Europe, who had suffered for years under Nazi rule, came out of the war only to find themselves occupied by the Soviets. I will also be putting forward the Soviet perspective in an attempt to explain why Stalin behaved the way he did.

You are a Professor of History at the Collegium Civitas in Warsaw. Can you tell us specifically about Warsaw’s experience as it shifted from World War II to the Cold War?

Poland’s tragedy is that it lies between Russia and Germany, two nations which have invaded and carved up Poland between themselves for centuries. Many forget that in 1939 Poland was invaded not only by Nazi Germany in the west, but also by the Soviets in the east, a situation that was only ended by Hitler’s invasion of the Soviet Union in 1941. As the war progressed, it became clear that the Soviets would liberate Poland. Poles were understandably nervous about coming under the Soviet yoke once again. They did not want to be ruled from Berlin, but they didn’t want to be ruled from Moscow, either. This was the reason for the ill-fated Warsaw Uprising, in which the Poles attempted to liberate the capital city from the Germans just before the arrival of the Soviets so as to act rather as “hosts” to the liberators. Of course, it backfired when the Germans proved much more resilient than the Poles had anticipated, and when Stalin refused to come to the aid of the beleaguered Polish Home Army.

In a little-known tragedy of the war, the city was decimated, with the loss of 200,000 civilian lives and the destruction of 80 percent of Warsaw. Worse still, it quickly became clear that Stalin had no intention of allowing the Poles their freedom. Between August 1944 and August 1945, over 100,000 Poles, even those who had fought alongside the Red Army, were arrested by Stalin’s secret police; many were executed or sent to the gulag.

At the same time, Stalin lied outright to the western Allies about his intentions in Poland. On October 13, 1944, Stalin, Churchill, and the Polish prime minister in exile Stanisław Mikołajczyk met in Moscow. Stalin played along with the idea that Poland would have free elections and become an independent country when the war was over. The official minutes read, “Marshal Stalin was just as resolute as the British and American Allies in the wish to see Poland as a sovereign and independent State, with the power to lead its own life.” But Stalin also added rather ominously that he expected Poland “to be friendly to the Soviet Union.”  It would take some time before the West fully understood that being “friendly” meant that the Poles and others behind the Iron Curtain would be utterly subjugated to the Soviet system.

One of the key tenants of the Museum’s mission is defining “what the war means today.” Can you tell us what World War II means in Poland today?

For Poles and indeed for others in the former Eastern Bloc, the Second World War was simply devastating and has left deep wounds which have yet to heal. World War II was the deadliest war in history and Central and Eastern Europe were particularly badly affected. Three million Soviet prisoners of war were killed through brutality and starvation. Around 25 percent of the entire population of Byelorussia perished.

The Holocaust—the deliberate destruction and murder of the Jewish population of Europe—saw the deaths of six million human beings. The statistics are simply overwhelming, and yet one has to remember that each number represents an individual, a person with parents and family and friends whose life was cut short because of a barbaric conflict over which they had no control.

For many in Central Europe, World War II did not really come to an end until the Berlin Wall fell in 1989 and Soviet troops finally withdrew from Central Europe. At last, people were able to live in free and independent countries and enjoy rights including membership in NATO and the European Union. Throughout the long struggle for freedom, the United States was always a role model; it is no surprise that Poland remains one of the most pro-American countries in the world.

In May 2016, I led a tour from Berlin to Dresden, from Kraków and Auschwitz to Gdańsk, to Hitler’s headquarters in East Prussia and to Warsaw, tracing The Rise and Fall of Hitler’s Germany. It was a very moving experience to travel in this part of the world with the wonderful group brought together by the Museum. When we went to places like Auschwitz-Birkenau, we really understood what we were fighting for all those years ago. I look forward to welcoming a new group on the tour next year.