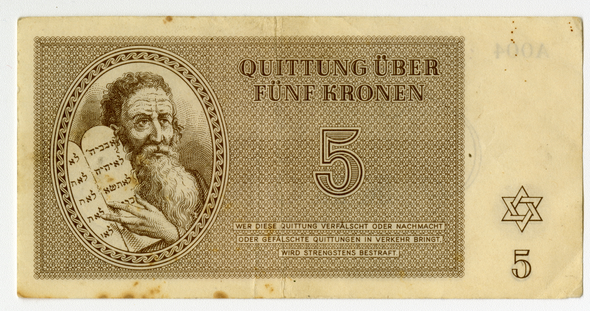 In 1938, when Czech Jew Ela Stein Weissberger was eight years old, her family fled their home near the Czech-German border to Prague. Her father was in the porcelain business and her mother’s family owned a glass factory. They lost everything. Her father was arrested by the Gestapo and never seen again. Ela, her mother, sister, and grandmother were on one of the first transports to Terezin (Theresienstadt) Concentration Camp, arriving in February 1942.

Roughly 150,000 people were held in Theresienstadt, mostly Czech Jews like Ela Stein Weissberger. The camp became a propoganda tool for the Nazis most notably when the Nazis allowed entry to the camp by Danish Red Cross and International Red Cross delegates in June 1944. These visits occured after a long period of adjustments to and deportations from the camp to give the appearance of relatively comfortable living conditions. While there, the delegates  viewed a performance of the children’s opera Brundibár, composed by Czech Jewish composer Hans Krasa in 1938 and first performed in the camp on September 23, 1943 under the watchful eyes of Nazi guards. The role of the Cat in the Brundibar Opera was performed by Ela Stein Weissberger. She appeared in the 1944 performance for the International Red Cross delegation that visited Terezin and also in the German propaganda film, Der Führer schenkt die Juden eine Stadt (The Fuhrer gives the Jews a city). The opera would have 55 performances at Theresienstadt in total and became a symbol of hope for the Jews in the camp.

Roughly 34,000 people died in Theresienstadt and another 87,000 were transported to death camps before the camp was liberated by the Soviets on May 8, 1945. Ela Stein Weissberger survived and after liberation, moved to Israel and joined the Israeli Army and then the Israeli Navy.  She then moved to America with her husband in 1958. Ela has dedicated much of her life to traveling around the world educating the public about the Holocaust.

Ela Stein Weissberger saved this Fünf Kronen (five crowns) note from her time in Theresienstadt. She gave the note to Museum Historian Hannah Dailey when Dailey recorded an oral history interview of Weissberger’s wartime experiences. The currency, designed in 1942 and distributed first in May 1943 was used mainly for sham purposes, but also to create a semblance of normalcy within the camp. Inmates could purchase supplies from stores, stocked from the plundered belongings of other inmates. Inmates were also required to pay postal taxes and receipt taxes on mail and parcels sent and received. These notes were saved by survivors and by collectors and they stand today as evidence of the extent of the bureaucratic landscape of the Nazi camp system.

Three performances of Brundibár will take place in May 2016 at The National WWII Museum’s US Freedom Pavilion: The Boeing Center. Ela Weissberger, the sole surviving member of the Brundibár cast at Theresienstadt, will be the Guest of Honor at each performance. To purchase tickets for the Brundibár performances at the Museum on May 14-15, 2016, click here.