SciTech Tuesday: John Nash and the Legacy of WWII

One of the hallmarks of the war effort during WWII was the use of intellectual capital. The Manhattan Project and other efforts brought together the best minds to solve big problems. With the end of the war, there was fear that the military and intelligence communities would lose all that intellectual capital.

Think-tanks like RAND (started by Douglas Aircraft Corporation) aimed to continue big science after the war. Tension with the USSR and the Soviet development of weapons so close to the war’s end fueled the fear.

John Nash was born in 1928, and so passed his teenage years in wartime West Virginia. He was a gifted student, who attended Carnegie Institute of Technology (now Carnegie Mellon University) on a merit scholarship. Nash graduated at the age of 20 with both Bachelors’ and Masters’ degrees, and headed to Princeton with this succinct recommendation from his advisor: “This man is a genius.”

Besides inventing a game that swept Princeton math’s common room, and later became Parker Brothers’ Hex, Nash wrote a dissertation called ‘Non-Cooperative Games’ in which he framed negotiation in a context that allowed prediction of benefits to parties and thus outcomes. Nash provided a way to analyze outcomes that did not require zero-sum calculations. The Nash Equilibrium, formally stated in that dissertation, won John Nash the Nobel Prize for Economics in 1994.

This advance in concept and mathematics revolutionized economics, and provided a theory for branches of evolutionary biology and other fields, where it is still influential today.

After taking only 2 years to complete his doctorate from Princeton, Nash was recruited to work for RAND. RAND was very interested in analyzing outcomes of competitive situations–for obvious reasons. His restless mind and desire for collaboration led him to stay at RAND only briefly. He accepted a position at the Massachusetts Institute of Technology in 1951, and worked at RAND as a consultant until 1954.

Nash had always been odd–persistently whistling the same bars from Bach, and leaving equations on the boards in empty classrooms–but a year after he received tenure from MIT, it was clear he was suffering from schizophrenia. His paranoid delusions were filled with spycraft and details from his time at RAND. They were influenced also by the cryptography work he had done over the first years of his time at MIT. Alicia Nash, an MIT physics graduate who had married John Nash in 1957, admitted him to a psychiatric hospital, in 1959, and gave birth to his son a few weeks later.

Nash was seriously ill with schizophrenia until 1970, living under delusions of voices of persons involving espionage and secrecy. He began to recover when he left those visions behind. Decades later his reputation as a mathematician was rehabilitated, and his relationship with his wife was tool. They had divorced in 1963, but she had supported him in the 1970s as he worked to recover. In 2001 they remarried.

Sadly, the couple died last week, on May 23rd. They had landed at Newark on a return flight from Norway, where John Nash had received the Abel Prize. The taxi in which they were riding on the New Jersey Turnpike struck the guardrail, and they were ejected from the car. John was 86 and Alicia was 82. 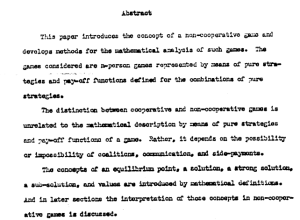 The beginning of John Nash’s dissertation.