SciTech Tuesday: Plutonium in the Desert

In late January of 1943 General Leslie Groves decided on a site for the third major research and production site of nuclear materials. On February 9th 1943 the military approved financing for building a facility in central Washington, on the banks of the Columbia River. The development of the Hanford site might be the greatest building project of the war effort.

With the development of facilities in Oak Ridge Tennessee (26 miles from Knoxville), and the Argonne Lab in Illinois (24 miles from Chicago), there were concerns about proximity to population centers in making new sites. In fall of 1942 Groves recruited DuPont to develop a plutonium production facility. Taking a very patriotic position, DuPont insisted that they not receive any profits or patents from the operation. With many technical requirements in mind, DuPont engineers searched for a site to build a huge operation around large reactors that would convert uranium to plutonium.

They settled on 670 square miles in the arid part of Washington, where the Yakima, Snake, and Columbia rivers meet. The area was isolated, although there were settlements of farmers and Native Americans. The presence of the large Columbia River flow was important to sight selection. The 1500 locals were relocated so that no one lived closer than 10 miles to the reactor and isolation units. DuPont moved quickly, breaking ground in March of 1943. DuPont employed 44900 construction workers on a site that eventually included 25 dormitories and 4300 family housing units to build and run Hanford during the war years. The campus grew to 554 buildings, including 3 nuclear reactors and 3 plutonium separation facilities, with 386 miles of roads, 125 miles of railways, and 4 electrical substations at a cost of $230M by the end of 1945.

The construction of the B reactor, designed by Fermi, began in August 1943. The B reactor was the first reactor built to produce plutonium (which was only discovered in 1940). It used about 180 tons of uranium slugs surrounded by graphite (to absorb emissions and control the nuclear reaction) and water from the Columbia piped through more than 2000 aluminum tubes (to cool the reactor) at a rate of 75000 gallons per minute. The used water was held in ponds for a few hours before being released back into the river. The construction of the reactor took about a year—by late September of 1944 the B reactor was producing plutonium.

Under the right conditions (bombardment by neutrons) uranium 238 will become first very unstable uranium 239, then decay to somewhat more stable neptunium, which decays to plutonium. Only a very small amount of the uranium will become plutonium in this process, so the uranium slugs need to be removed from the reactor, chemically treated to remove the plutonium, and then returned to the reactor for more processing.

DuPont developed several technologies to make and improve the reactors at Hanford in the war years. When they developed the next two reactors (B and D added in 1944 and 1945) they added ammonia cooling of the water before it entered the reactor. They also developed teflon and closed-circuit cameras to more easily conduct repairs and replacement of parts in areas of the plant where workers could not go because of high radiation. The chemical separation process also was managed remotely.

The radiation inside the plant contaminated all the parts used to build it. They became radioactive too. In fact, the water released in the Columbia was also contaminated. Over decades the reactors at Hanford created a lot of environmental contamination in accidental air releases, groundwater contamination, and release into the river. Today Hanford is the site of some major research operations and power generation, but it is also our country’s biggest hazardous waste site.

The first batch of plutonium from the B reactor was ready February 2nd 1945 and arrived in Los Alamos on the 5th. The bomb tested at Trinity and Fat Man (detonated on Nagasaki) used plutonium from the Hanford reactors. Reactors B, D, and F continued operation into the 1960s. 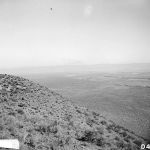 I worked at Hanford in the summer of 1991, and it still looked like this. 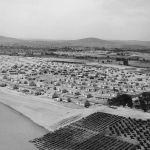 This image shows some of the family housing at the Hanford site. 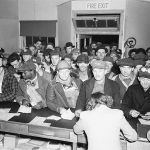 Hanford workers picking up their checks from the Western Union office 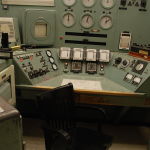 No, that's not where Homer sits, unless he worked at the Hanford site's B reactor 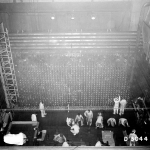 Engineers at the B reactor during construction 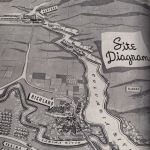 If you’d like to start a chain reaction of STEM teaching innovation at your school, apply to our Real World Science program for Middle School science teachers.

all photos from the Wikimedia Commons.

Remembering the Malmedy Massacre FREE Student Webinar on the Holocaust