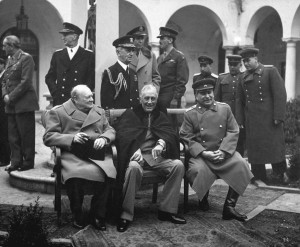 The Big Three – Churchill, Roosevelt and Stalin – at the Yalta Conference, 1945. Courtesy of the National Archives and Records Administration.

National History Day is a year-long historical research contest for middle and high school students. Each year, students from across the country develop a project based upon the annual contest theme. The annual theme for the 2015 National History Day contest is “Leadership & Legacy in History;” a topic which also offers many opportunities for students to research and explore powerful subjects and figures in WWII history. When we think of “leaders” in WWII, we often think of commanders on the battlefield, however, examples of leadership can be found throughout the war years of 1941 – 1945, both on the front lines as well as on the Home Front. The outcomes of the actions of WWII leaders vary too – some triumphed while some were defeated – and it is these outcomes and the lessons drawn from them that determine a leader’s “legacy.”

Oftentimes, the actions of political leaders in WWII determined both their own legacies as well as the legacies of the nations which they led. For example, the decisions of The Big Three – Roosevelt, Churchill and Stalin – at the week-long Yalta Conference in 1945 determined the end of WWII and the shape of the post-war world. On other hand, the brief meeting of Nazi leadership at the Wannsee Conference in 1942 set in motion the policies of systematic extermination which resulted in millions of death in The Holocaust.

Similarly, military leaders helped secure both their own legacies as well as the fates of their countries by their victories or defeats on the battlefield. Pioneering mobile warfare tactics were the key to many of General George Patton’s victories in WWII, with these tactics going on to shape American military tactics for years to come. Sometimes success as a military leader also took precise planning and organizational skills as was seen with Army Chief Of Staff George Marshall, who was both the “organizer of victory” as well as the architect behind the rebuilding of Europe through the Marshall Plan.

Examples of leadership with lasting legacies from WWII are not found solely within high political or military office either. African-American activist A. Philip Randolph led the way in the desegregation of the American labor force in WWII while also laying much of the ground work for the post-war civil rights movement. Anna Mae Hayes served in the Army Nurse Corps during WWII before going on to become the first woman in the U.S. military to be promoted to the rank of general officer.

Finally, while the leadership of individuals and their accomplishments during WWII are important, the legacies of these leaders in the post-war period should also not be overlooked. During WWII, First Lady Eleanor Roosevelt visited troops and help support the Tuskegee Airmen while, following the war, she worked to establish the United Nations to provide for peaceful ways of resolving international disputes, and pass the U.S. GI Bill of 1945, which promised to provide returning veterans with help and access to education, housing, and more.

World War II is a rich and exciting time period in which to study and explore the clash between leaders – both famous and infamous – their actions and what their legacies can teach us today. 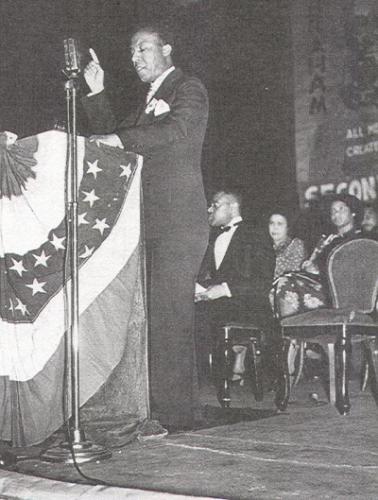 A Philip Randolph announcing the march on Washington D.C., 1941. Courtesy of the National Archives and Records Administration.

Spotlight: “What Would You Do?” Home Front Friday: New Year New ‘Do