Whitewashing the Road to Berlin Opel 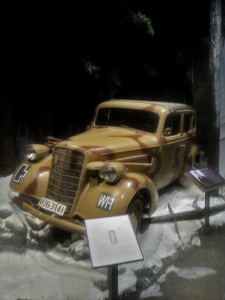 Camouflage was a critical means of survival during World War II and as seasons changed and armies moved from theater to theater staying camouflage became a problem for many armies. During winter this was particularly an issue; vehicles painted green, grey, tan, brown, or black in a variety of patterns stood out in the white snows of Europe.  As soon as the snow melted the newly-painted white tank would stick out even more and require another coat of paint. This resulted in a number of temporary solutions being invented. Bed sheets and other white linens could be used to make vehicle covers and ponchos for men, but this meant trying to acquire large quantities of linens which proved to be difficult in combat zones.

Instead a simple solution was devised and used by nearly every army fighting in Europe, from the Finns in the north to the Russians in the East and the Americans and Germans in the west. Lime, easily acquired by burning limestone, was mixed with water to make whitewash. Whitewash was similar to plaster and was popular throughout the western world for painting exterior structures like fences. The wash was quickly daubed all over vehicles and after drying the car or tank would appear to be painted in white camouflage. The true genius of this solution was that when winter ended the vehicle did not require repainting. The mixture dissolved when rained on, and the white coat washed away to reveal the vehicle’s original color. This process saved a huge amount of time and resources; the whitewash could be applied in minutes and after washing away did not require the vehicle to be repainted when the weather warmed up.

The National WWII Museum’s Road to Berlin features such a whitewashed vehicle in our Battle of the Bulge gallery. An Opel 6, painted in a brown and tan pattern, was chosen to illustrate the desperate state of the Nazi German mechanization during the war. Despite popular perceptions of the Nazi military as a highly modernized and mechanized force, vehicles were always in short supply. Civilian vehicles were often used to fill in as staff cars, ambulances, and courtier vehicles, including this Opel luxury sedan. This vehicle was whitewashed by Museum curators to demonstrate the technique used by soldiers throughout the war. The addition of blackout slits painted onto the vehicle’s headlights and branches to the top of the car would have made it nearly invisible from both the air and the ground. 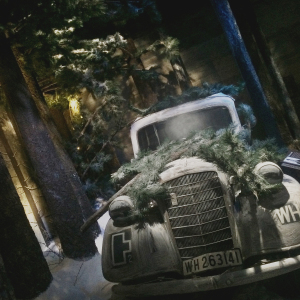 Opel Staff Car in Road to Berlin exhibit as it will appear to visitors in winter camouflage.

This WWII camouflaging technique even has its benefits for this artifact. If the Opel is taken off of exhibit and needed elsewhere, the white color of the vehicle can easily be washed away. The entire process, takes only 20 minutes in addition to drying time. When the whitewash is first applied, it appears clear, but as it dries it becomes almost-solid white. The underlying camouflage pattern is scarcely visible, and helps to further break up the outline of the car. Simple modifications or additions such as this whitewashing are often used by museum staff to better illustrate conditions on the ground during the war.

Visitors to the Museum can now see this staff car and learn more about the war in Europe in our exhibit The Road to Berlin.

Post by Brandon Stephens, Curator at The National WWII Museum.