Imagine it is 1943, and you are a Danish professor, son of a Jewish mother, hiding with your wife in a potting shed in suburban Copenhagen near the harbor. It is September 29th, late summer in many places, but in Copenhagen it is definitely autumn. The cool dampness soaks through your clothes as you wait, each of you sitting on the one bag you were able to pack, until darkness falls and you can slip away to the harbor. Your six sons are still at home, unaware of the predicament the family is in.

The Germans have controlled Denmark since April of 1940, but Danish resistance has been strong. The Danes have managed to prevent the removal of the country’s 8000 Jews. Gradually the Germans tired of strikes and sabotage, and Hitler was not happy at the exemption of Danish Jews from the Final Solution. Months of bad news for the Axis increased the pressure on the Nazi forces, and they have re-occupied Copenhagen, confined the King, and ordered saboteurs to be shot immediately.

As the danger increased, you, as director of a research institute, worked to protect and smuggle out as many foreigners and people of Jewish descent as you could. The Germans have wanted to arrest you, but your international reputation makes you a catalyst for revolt. Nazi strategists decided that the best way to capture you would be as part of a general roundup.

Only this morning you heard from an infiltrator of Nazi headquarters that you were now the target of their attention. Thus your position between bags of bulbs and mulch in an outhouse growing colder by degrees as the sun sets. Your night will be more hazardous, wet and cold as you and your wife are loaded into a small motorboat, and then a fishing boat, by moonlight. Your captain avoids mines and patrols to take you across 25 miles of cold sea to Sweden. Your wife is by your side the whole way, but your sons are still behind, your liberators hoping to move them within the week.

This is the story of Niels Bohr, who was born on October 7th in 1885, in Copenhagen, Denmark and lived until November 18th, 1962. His parents were prominent citizens of the city—his father was a physiologist and his mother’s family was Jewish, and rich from banking. Bohr was given the Nobel Prize in Physics in 1922, for his elucidation of the structure and energy of atoms. His Institute for Theoretical Physics in Copenhagen brought together, as visitors and permanent members, Heisenberg, Schrodinger and other great minds. In 1939, in response to the discovery and mechanical explanation of fission, Bohr co-authored a theoretical paper, “The Mechanism of Nuclear Fission,” which set off the race to build the atomic bomb. In the 1930s Bohr worked to help scientists fleeing the Nazis. He arranged housing and jobs for them in Copenhagen while working with the Rockefeller Foundation to help them find jobs and settle away from danger. These scientists were at risk either because they were Jewish, or because they had opposed the rise of the Third Reich and its methods. Bohr found himself in occupied Denmark in 1940, having sent all the visiting scientists abroad before the invasion.

In Sweden, not controlled by the Germans, but pinned by their occupation of Norway and Denmark, the situation was tense. In spite of that, Bohr convinced the King to announce by radio that Sweden would offer asylum to Jewish refugees. In the following months more than 7,000 Jews fled Denmark for Sweden successfully, many along the same path Bohr took.

It’s hard to talk about modern chemistry without bringing up the name Bohr. Students are taught to write Bohr models of atoms, and taught the complementarity of particles and waves in atomic structure as a foundation of understanding chemical elements and how they interact. These ideas were an inspiration to Einstein. 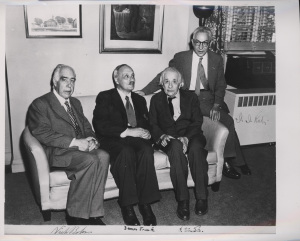 Less often do we hear about the complementarity of honor and empiricism, or the combination of brilliance and bravery. Many scientists worked to make the science of the Manhattan Project eventually successful, and many of them were characters. Niels Bohr had character.

Bohr’s sons got safely to Sweden, and most of them lived there with their mother for the remainder of the war. Bohr and his eldest son went to England, and traveled between there and the United States working on both countries effort to develop nuclear power. After the war he worked to form an international organization to monitor nuclear power and weapons development. He was a mentor to young physicists and quantum theorists like Richard Feynman.

Niels Bohr returned to Denmark following the war. When the King of Denmark conferred upon him the Order of the Elephant, an award normally given only to heads of state and royalty, Bohr designed his own coat of arms, which featured a yin-yang symbol and the Latin phrase contraria sunt complementa (opposites are complementary). 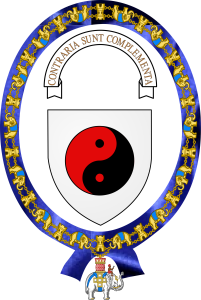 Who was the first computer programmer? Tune in next week to find out.

Both images from Wikimedia Commons.