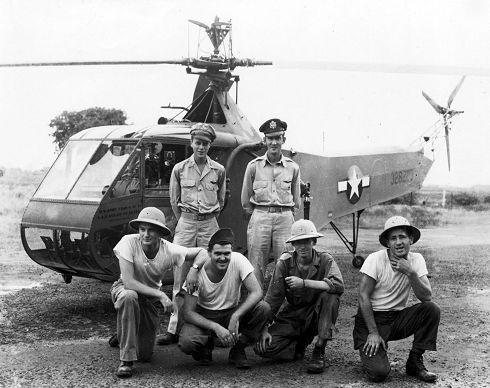 Lt. Harman (standing left) with ground crew in front of the Sikorsky YR-4B in January 1945. Image courtesy of the U.S. Air Force Museum.

Today marks the 70th anniversary of the first recorded helicopter rescue by the U.S Military. U.S. Army Lieutenant Carter Harman dramatically rescued a downed pilot and three wounded British soldiers from the jungles of Burma in the Sikorsky R-4 “Hoverfly.” The high altitude and humidity lowered the capacity of the helicopter to one passenger, forcing Lt. Harman to make four trips to rescue the stranded men.

The Sikorsky YR-4B was constructed of welded steel tubes with a fabric-covered body. Built of plywood ribs also in a fabric-covering, the main rotor stretched to a diameter of 38 feet. The helicopter accommodated a pilot and passenger and a maximum weight load of 2535 pounds. The Hoverfly had a maximum range of 220 miles, cruising speed of 65 mph and an altitude ceiling of 8,000 feet.

Helicopters use rotors to supply the aircraft with lift and thrust, allowing it to navigate forward, backward, and side-to-side. The ability to take off and land vertically allows helicopters the flexibility to reach congested or remote areas. Helicopter rotor blades are curved on top, just like the fixed wings of an airplane. As the rotor turns, air flows faster on top and slower on the bottom creating low pressure above and high pressure below. This lifts the aircraft as the rotor turns.

Simply wish to say your article is as amazing. The clearness in your post is just spectacular and i can think you are a professional in this subject. Well with your permission let me to grasp your feed to keep updated with approaching post. Thanks one million and please carry on the gratifying work.