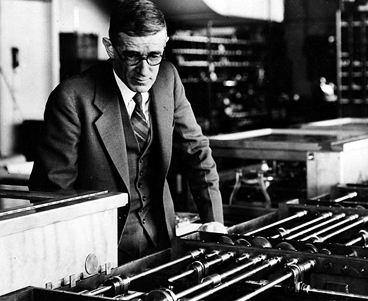 Vannevar Bush with the differential analyzer, an analog computer he helped to develop. Image courtesy of the MIT Museum

Today marks the birthday of Vannevar Bush, nicknamed “the General of Physics” by Time magazine in 1944. Best known for his role as the first director of the Office of Scientific Research and Development (OSRD), Bush oversaw wartime scientific efforts including the development of radar and the Manhattan Project. Vannevar Bush provided the direction and leadership needed to push the United States to the forefront of scientific and technological innovation.

In his 1945 report, Science: the Endless Frontier, Bush pressed President Truman to continue the momentum of wartime innovation by creating the National Science Foundation to promote basic research and science education. He saw the need to form a national policy on science in order to develop scientific literacy and talent in America’s young people by providing scholarships and fellowships.

Bush was visionary in his concept of the “memex,” a devise for storing and sharing information where data could be cross-linked and accessed with ease and speed. His idea provided the basis for the development of hypertext, layers of information which can be explored progressively using hyperlinks. Generations of computer scientists drew inspiration from Vannevar Bush leading to the creation of the internet almost 50 years later.