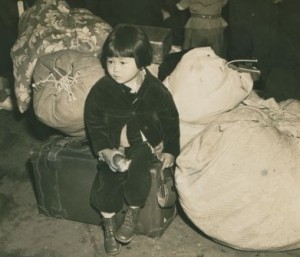 A young Japanese American evacuee waits with the family's luggage before leaving for an assembly center, 1942. Courtesy of the National Archives and Records Administration.

National History Day is a year-long historical research contest for middle and high school students. Each year, students develop a history project based upon a pre-selected contest theme. This year’s National History Day theme, “Rights and Responsibilities in History,” presents a wonderful opportunity for students to research and present on World War II topics and explore the realm of civics. When we think of the term “rights,” many of us tend to think of the rights that we have as American citizens, such as freedom of the press, freedom of speech, and freedom of worship. As citizens, we also have certain obligations or responsibilities to the country in return for such rights, like jury service, obeying laws, paying taxes for government services, and, in some cases, military service.

During World War II, American citizens contributed to the country’s war effort in a variety of ways, including serving in the armed forces, working in factories to manufacture weapons and munitions, rationing, volunteering for the Civilian Defense Corps, and buying war bonds. However, rights in wartime could also be challenged or actively denied in the name of national security. Possible NHD topics that explore this issue of the restriction of rights include the experiences of Japanese-Americans and Native Alaskans from the Aleutian Islands who were forcibly relocated and placed in internment camps by the government, who viewed them as potential spies for the Axis powers.

Students could also explore the question of rights and responsibilities by studying the Selective Training and Service Act of 1940. This act required all men between 21 and 45 to register for the military draft, and legally obligated those that had not already volunteered to serve in WWII if their lottery number was called. There is also the issue of discrimination faced by Latinos, African Americans and other Americans of color during the war as they fought for a “Double Victory” against both the Axis Powers abroad and over racism at home. Examples include the Tuskegee Airmen, who were African American pilots that were trained in segregated facilities, and who went on to distinguish themselves in combat, as well as individuals like the late Senator Daniel Inouye, who, as both a Native Hawaiian and Japanese American, sought to prove his patriotism by volunteering to serve in the segregated Japanese American 442nd Regimental Combat Team.

Additionally, there are many examples of moral dilemmas and obligations regarding the rights and humane treatment of combatants and civilians in this total war. These include the treatment of both Allied and Axis prisoners of war (POWs) under the Geneva Convention of 1929, President Roosevelt’s decision not to bomb the Nazi death camps towards the end of the war to slow the murder of Jews and other declared enemies of the Nazi state, and the Allies’ decision to conduct international war crimes trials to punish those accused of human rights abuses during the war. Students could also look at the work of the Allies’ Monuments Men to protect, preserve, and recover the cultural heritage of war torn Europe so that these artistic treasures could be enjoyed by future generations.

Finally, don’t forget to look at events from the post-war period, too. Other great potential NHD topics are the post-war plans of Eleanor Roosevelt and others to establish the United Nations to provide for peaceful ways of resolving international disputes, and the U.S. GI Bill of 1945, which promised to provide returning veterans with help and access to education, housing, and more. World War II is a rich and exciting time period to study and explore the clash between the preservation of and the destruction of individual and collective rights, between democratic and totalitarian ideals, and the moral and civic responsibilities that men and women faced during a time of total war. 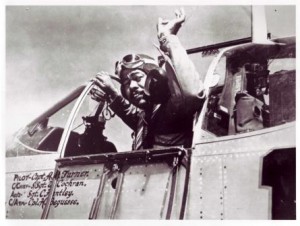