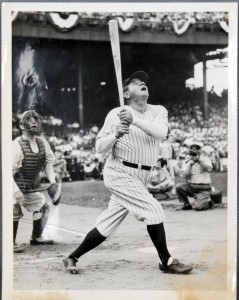 70 years ago today on August 26, the Polo Grounds, at the corner of West 155th St. and Eighth Ave. in Manhattan, played host to an all-star afternoon of sport and entertainment, organized by the New York Journal American newspaper to sell War Bonds and to raise money for the war effort.  Featuring entertainment and comedy from the likes of James Cagney, Ethel Merman, Cab Calloway and Milton Berle, the main attraction of the day was an exhibition game featuring some of baseball’s biggest names, including seven of the then twelve living members of the Baseball Hall Of Fame and three of ‘The Five Immortals’ of the inaugural Hall Of Fame class of 1936:  Honus Wagner, Walter Johnson and Babe Ruth.  In the exhibition match-up, an all-star squad, referred to interchangeably as the “New York All-Stars” and the “Yanks-Giants-Dodgers,” defeated the U.S. Army New Cumberland Reception Team 5 – 2, though the G.I. team was aided by professionals Hank Greenberg, Johnny Beazley, Danny Murtaugh, Billy Hitchcock and Enos Slaughter.

In front of an audience of over 35 thousand, the War Bond Jubilee Game raised a staggering $800 million dollars in War Bonds, sold as either advertising or tickets for the event; equivalent to nearly 11 billion dollars today.  Fans in attendance that Thursday were rewarded with a truly memorable display, including Babe Ruth taking Washington Senators’ legend Walter Johnson deep into the right field stands.  This blast off ‘The Big Train’ was to be Ruth’s last ever home run in a major league ball park.  Ruth would succumb to cancer in 1948.

Sid Feder of the Associated Press described the scene:

“There were still 35,000 lumps in 35,000 throats around the village Friday, all because a dozen old men walked out on a ball field.  As they spread out on their regular spots on the field, the lump you got in your throat and the moisture in the eyes of some of the most blasé baseball writers in the press coop were more than enough to prove that the baseball fan is at least part elephant.  He never forgets.

“It didn’t matter that in fielding some of Babe’s “practice shots” Murray fell down, Speaker was practically decapitated and Collins was all but carried into right field by a line drive.  The folks had a look at ‘em, and the Babe finally parked one.  That was the icing on the cake.”