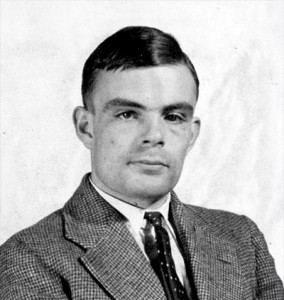 On May 28, 1936, Alan Turing submitted his ground breaking paper, “On Computable Numbers.”  Just 24 years old at the time of publication, Turing both identified the characteristics of a “computable” number and described a simple method for carrying out those computations.  He essentially conceived of the modern computer on paper using mathematics before the technology existed to actually build the computer.  Called the Turing Machine, it formed the theoretical foundation for modern computer science.

During the war, Alan Turing led Hut 8, a section of the Government Code and Cypher School at Bletchely Park responsible for deciphering German naval messages.  His contributions allowed the Allies to break the Enigma, turning the tide in the Battle of the Atlantic and eventually providing critical intelligence in preparation for the D-Day landings.

Read more about the capture of the Enigma from U-559 and Bletchley Park’s role in Allied victory.