70 Years Ago Today: The Pentagon Dedicated 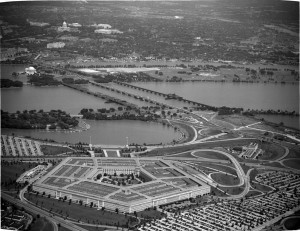 On this day 70 years ago, the new headquarters of the United States Department of Defense was dedicated.  Costing over 83 million dollars, covering over 6 million square-feet and completed in less than 17 months, construction on the iconic five-sided structure known as the Pentagon began in September 1941 on the former site of the obsolete Washington-Hoover Airport.  The Pentagon was conceived by Secretary of War Henry Stimson as an ‘overall solution’ to the inadequate facilities available for an American military then in the midst of a rapid expansion.

Designed by architect George Bergstrom and built by general contractor John McShain (the primary contractor behind such other landmarks as the Jefferson Memorial, the John F. Kennedy Center for the Performing Arts and the Ronald Reagan Washington-National Airport), the Pentagon owes its unmistakable shape to a site originally considered then later rejected for construction (a roughly five-sided temporary housing complex known as Arlington Farms) and its relatively low vertical height to the American war-effort’s increasing demands for steel and other heavy weight-bearing metals.

In order to manage the pressing needs of the war, many DoD officials began working in the Pentagon before the building even neared completion.  Built a one wing at a time, employees moved into the first completed wings as construction continued on the remaining ‘spokes.’  In keeping with this spirit of expediency and the lack of formality at the 1941 groundbreaking, there was no formal dedication ceremony when construction on the Pentagon ended on January 15, 1943:  70 years ago today.